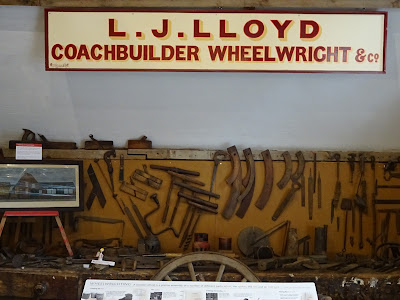 My latest column for History Today can be read online here. Here's a taste:

If you recognise the type of town museum I mean, you will know just what kind of displays it boasts. There will always be cases of assorted Roman and Anglo-Saxon stuff: tweezers, strings of beads, pins and brooches, anything not quite important enough to be claimed by a bigger museum. There will be stones from a ruined abbey – there is always a ruined abbey somewhere nearby – looking to the untrained eye like mere lumps of rock, until the caption explains where they came from...

There will be recreations of old shops, anything from miniature models to a full-size mock-up, a reminder of the days when the town had a plethora of grocers and ironmongers and haberdashers. The paraphernalia of these trades, laid out and carefully labelled, is as alien to visitors now as tools from an Iron Age grave. Perhaps one of those businesses might have done well enough to be taken over by a multinational and lose its local name, but it lives on in this museum, proud of any local success, which loyally documents its workers’ memories of factory outings and Christmas festivities. 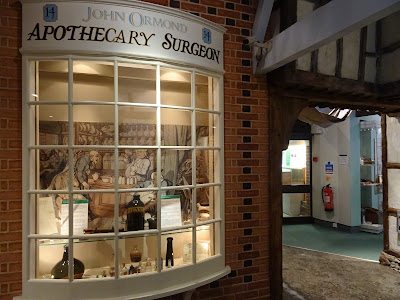 What else? A neat sampler; a collection of model soldiers; taxidermy from a naturalist’s study; farming equipment found in somebody’s garden. Touches of whimsy: a place where schoolchildren (and adults, when no one else is looking) can dress up in a Cavalier’s hat or a Victorian bonnet, laugh at themselves in the mirror, and wonder for a moment what it would be like to wear such a clumsy thing every day.

The everyday – that is the charm of all this. If any of these objects were unusual, they would be kept somewhere else, in some grander museum; they are here precisely because they are common, and it is because they are common that they are precious. A museum like this is a treasure-house of the ordinary, where the material of everyday life is gathered up and cherished. Its Roman pins and workers’ memories tell local versions of a larger story, giving individual life and colour to the abstractions of history. 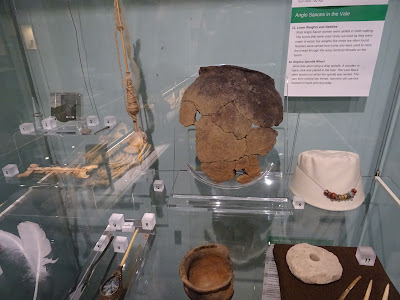 Read the rest here. Many different visits to many different museums fed into this piece, which has been in my mind for a long time - at least as long ago as 2012, when I wrote this post about a visit to Evesham and its wonderful little museum. More recently, I moved to a town which has a tiny but jam-packed heritage museum, with a gloriously miscellaneous approach which made me feel like I, though a brand-new resident of the place, could become part of its centuries-long story. I love such museums, I wouldn't change a thing about them, and I think any academic who really wants to understand how the public perception of British history is formed should spend some time reflecting on the experience they provide - not just the actual information, but how all the pieces of the puzzle are fitted together. If you're a medievalist who wants to appreciate how the average British person understands the term 'Anglo-Saxon' (just to pick a random example...), you'll get much closer to it by visiting this kind of museum than you will by reading the rants of angry people on the internet. (If you're too far away to visit in person, you might consider following one or two of them on Twitter.) In particular, the service these museums provide in educating school groups - and giving parents with children something to do on a wet afternoon - means they have a formative role in the communication of history to people who may never go on to study the subject further, but who may nonetheless retain a sense of its place in their perception of local and national identity.

Every place matters, and every place has a story to tell. And experiencing that story, somehow, can put things in perspective. When you spend most of your time thinking about just one period of history - even if that period is a thousand years long! - it's refreshing to experience the dizzyingly telescopic effect of visiting this kind of museum. The story of 10,000 years of human habitation in one small landscape, all told within the space of a museum you can visit in less than an hour. A thousand years are but as yesterday - 'the twinkling of an eye and the briefest of moments'. 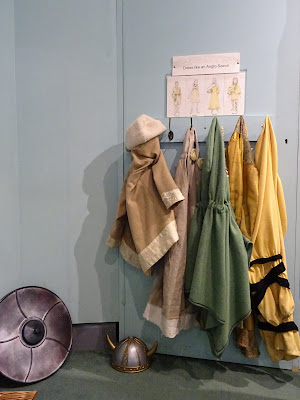 I could count over the museums of this kind I've visited like a litany, and they would all be simultaneously distinct and yet somewhat akin. Here are a few which have particularly stayed in my mind: Cirencester, with Roman mosaics which have to be seen to be believed; Tamworth, in a castle, where excited children were playing with replica weapons from the Staffordshire Hoard; Ely, where you can learn all about Hereward the Wake and suddenly just feel how cold the Fens would be in winter; Chichester, with its Ozymandias-like fragment of a huge statue which guarded the Roman harbour; the Viking graves and silver hoards of York; Reading's bright and yet strangely moving display of Huntley & Palmer's biscuit tins. And all that surrounds the star items, which is the common and the everyday: the tools, the bits and pieces of working life, the day-to-day domesticity. Most lately I visited the museum which provided the pictures for this post, the Vale and Downland Museum in Wantage. There you can travel from the needles of Anglo-Saxon craftswomen to the tools of lost rural industries to a display on the local atomic energy base just by turning your head. Three rooms, more than four thousand years of history - so many days of work, lives of skill and labour, which could be forgotten if they were not respected and honoured here. 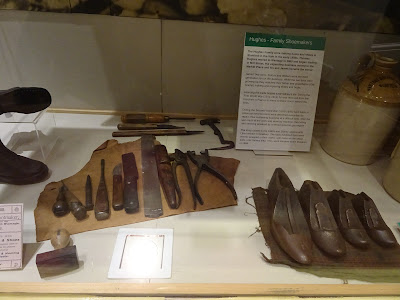 Last of all I would list one I mourn, Canterbury Heritage Museum, which closed just last year. That was probably the first such museum I ever visited, on a primary school trip. There you could wander from Roman Canterbury to Rupert the Bear, via a unique little Anglo-Saxon sundial, an early steam locomotive, a model of Canterbury Cathedral with poor William of Sens falling off the scaffolding (can I be remembering that right?), a tapestry about Thomas Becket, a replica of Joseph Conrad's study, and very poignant memories of the city under bombing during World War II. I hope all those precious things are safe and treasured somewhere, even if you can't visit them any more. But it's a reminder that we really do have to cherish these museums while we have them - we'll miss them badly when they're gone. 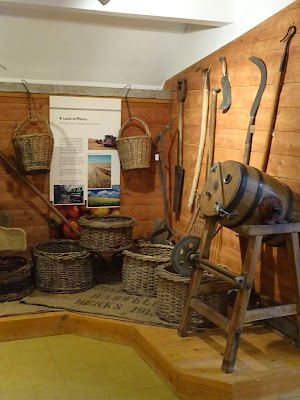 Oh yes, spent many happy hours at our FREE local museum with the child's when they were small, filling in long rainy mornings or afternoons, visiting favourite items, taking in exhibitions... Thanks for the memory