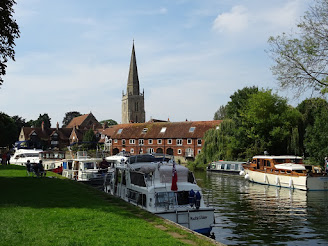 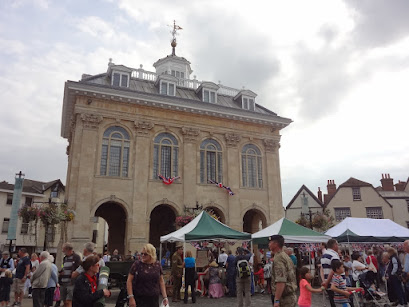 I am reminded of the claims (which I have not verified for myself) - supposedly supported by good documentary evidence - that there has been a hostel of sorts at Spittal of Glenshee more or less continuously since the 8th century. Since the fire which destroyed the Spittal of Glenshee inn five or so years ago, however, there has been nothing ... and I wonder how long the site has to stand derelict to break the claim to "continuity".

I live in a place called Pocklington (Pocela for the Romans, I understand) and the talk here is that there has been a settlement in this part of Yorkshire for the last 10,000 years. So would that be older than Abingdon?

Well, you did turn off comments to the poem below, Fantasy, so it is rude of me to comment here...but...you do have the option to never post the comment! :-) The poem refreshed my soul, relieved it, comforted it--it's leveling, isn't it?--because we were just talking the other day about the title alone of Schaefer's book, How Should We Then Live...the power of that phrase, and the straining of our eyes in trying to see what life IS so that we will know what to DO and be--and this poem so puts life into perspective.

Also, I loved the Ecclesiastes paraphrases, though I often veer away from the arid, bare, towering peaks of world-weary thought that King Solomon reached there, thinking...someone needs to put a puppy or kitten into his arms. Then he would know more about life...it is not distant cynicism...it is love and warmth...endless studies don't teach one that, puppies do: happy for no seeming reason, loving you for no seeming reason, joy of life for no sensible reason.

The internet wrangling? We are all too much in each other's business now and need to return to private life, back to "make it your ambition to lead a quiet life, to mind your own business and to work with your hands." The more we are tumbled together on the internet, in this tower of Babel, current site excluded, the more I see that the beauty of life is in the peaceful, private, separate home, separate thought--that no peace and beauty can survive in the together-tumbling, that there the pigs trample the pearls, but like Hezekiah's treasures, the pearls were never meant to be shown to the Babylonians. Only somehow, the pearls at this site still exist in the quiet! Untrampled. God knows how to hide treasures right out in the open and to reveal them only to those who please Him, and...I thank Him for the gifts I read here this morning.

Regarding this post, Abingdon: We live near an Abingdon, so I visited your Wiki-link to see...was ours named after yours or were they both named after a town in classical antiquity (which is often the case)? But it seems, in this case, that you have the very charming original.

You have a rare gift of sharing with open hands and mind. It is difficult to express in words, but you perhaps also have encountered those who love Shakespeare in a way that takes him away from everyone else, instead of giving him to them, and I wrote earlier this year in my journal, "How I loved C.S. Lewis before I met the others who professed to love him! Ditch them, keep him." Someone I used to know loved the Gospel of Mark so much that it had to be all theirs and no one else could understand it as they did...and I couldn't bear to read it for several years after that. It is like trying to keep the sun or the sky for themselves. Whatever *is* that malady? Until you just have to keep away from them if you hope to have any joy at all. But to know a treasure and to love it intensely and to share it freely...it's such a rare and beautiful gift and you have it.