The company of the dead

There’s a particular horror in the idea of dying alone, and the fear of a lonely death haunts many of us. But in one or way another, death is always lonely. The grave is a solitary place, and death is a journey you have to undertake alone. Different cultures develop their own ways of lessening the loneliness of the grave, providing those who are grieving with some continuing connection to the dead. In the Christian Church, for the past thousand years, an important season for bridging the gap between the living and the dead has been the twin feasts of All Saints’ and All Souls’, on 1 and 2 November.

As the names suggest, both feasts offer the very opposite of solitude: they are opportunities to connect with multitudes, communities, vast companies of the dead. The first day celebrates the saints in heaven, the “cloud of witnesses” and the “great multitude which no man could number”, as they are described in Biblical texts read at this feast; the second day is for everyone else, all the “faithful departed” — an even greater crowd of souls.

By the later Middle Ages, these days formed a coherent and widely observed season of remembrance, known in medieval England as “Hallowtide”. The two days had distinct but related aims: All Saints’ was intended to celebrate the glorious dead and to ask for their prayers, but the purpose of All Souls’ was to pray for the dead, for those in Purgatory who needed the prayers of the living to help them in their passage to heaven. It was a time not only to remember the dead but to look after them, to give them assistance and comfort. On the nights of Hallowtide, church bells rang out to reassure the souls in Purgatory that the living had not forgotten them. It must have been profoundly comforting to the grieving, too, to feel that they could still do something to help those they had lost.

Caring for the dead wasn’t just for Hallowtide, though. In the Middle Ages, looking after the dead was a duty incumbent on believers all year round. Prayer for the dead, known and unknown, was a regular feature of medieval devotion, and was seen as an important act of charity. Believers were encouraged to pray for the souls of those they had known in life — their family, godparents, or benefactors — but also for those whom they had not personally known, but with whom they shared some connection: deceased members of their professional guild, or all the dead buried in their parish church. And they were asked to pray too, as many still do today, for those who had no one else to pray for them. No one was to be left alone in death.

I've written for Unherd about All Souls Day in this year of solitude; read the rest there. 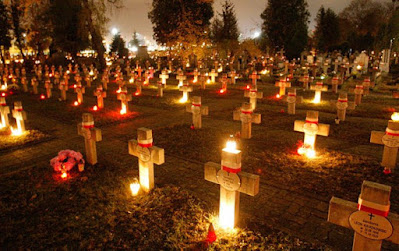 It's struck me so forcefully this year that whatever else you might say about the medieval church, they knew how to deal with death: learning how to face it, and how to talk about it, were seen as skills fundamental for living a good life as a thinking person in this world. For many modern people, the vast medieval literature about death and the rituals and structures for facing it are easily dismissed as superstition; but as we've seen this past year, ignoring the reality of death doesn't tend to make societies less irrational about it. Not wanting to talk about the inevitability of death doesn't make it go away; and if you don't learn to face the fear of death, the fear itself can consume you, and swallow up everything else you hold dear.