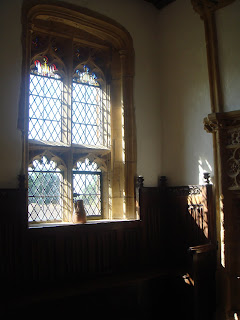 Recently I've been reading a lot of Middle English tail-rhyme romances - the supreme example, to my mind, to support the argument that originality in literature is over-praised. Most of these romances are formulaic, predictable and repetitive, in every aspect from plot to characterisation to vocabulary and imagery, yet they are immensely satisfying to read. Well, I find them immensely satisfying; lots of critics don't agree! But I'm the kind of person who would rather read the Child ballads than the Canterbury Tales, so I have basically no high-brow credentials.

Anyway, there are a very high number of formulaic phrases in the romances, which are often just used to fill out the rhyme, but some of them - pretty much by accident rather than poetic skill - are extremely evocative. I was thinking of this yesterday because I was reading the romance Ipomadon, which is about a bashful knight who does all his fighting in disguise; it's absurdly long, but it has some nice moments. One of the formulae which struck me there is the conventional simile for a woman's beauty: the hero calls his lover "her that is of ble as bright/as sun that shines through glass" (ble = countenance).

This made me think about glass. It's a common phrase to describe women in the romances, and even some of the men - King Horn, for example, has this in the opening picture of its hero:

In romances, eyes are often "grey as glass" - grey (that is, blue) eyes being considered the height of beauty. I confess this simile puzzles me a little, because I can't quite imagine how glass can be considered blue; perhaps it helps to remember that medieval glass was distorting, not clear. Is that why sun shining through glass is brighter than ordinary sun? 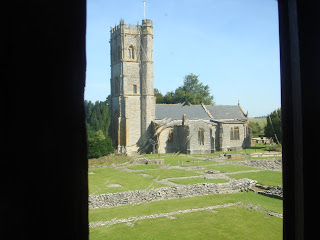 Devotional lyrics in praise of the Virgin Mary have their own twist on the 'light/glass' topos. The carol with the refrain "To bliss God bring us all and some, Christe, Redemptor omnium" contains the lines:

As the sunne shineth through the glas,
So Jesu in his mother was.

And another lyric addresses her: "[As] gleam glidis þurh þe glas, of þi bodi born he was". Though a conventional image, it's still a lovely and an elegant one, with the gentle delicacy of this more famous lyric. It's a common formula because it works, every time.

This was all just an excuse to post this picture: 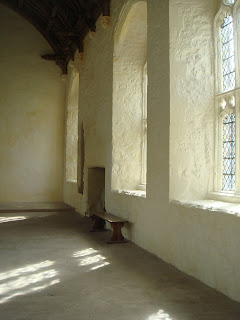 The refectory of Cleeve Abbey, Somerset
Posted by Clerk of Oxford at 1:36 pm