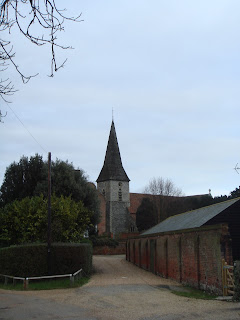 Over the Christmas vacation, I found myself in the little village of Ickham in Kent. Ickham is right next door to Wickhambreaux (though I think it's just coincidence that the names rhyme so neatly) but its church had a very different feel. That might just be because we went on a winter's day - Old Year's Day - and it was already growing dark when we got there. But then again, it might not. It's fascinating to me how two churches which are so close - not ten minutes' walk apart - can be so different.

Would you like to know something about the Anglo-Saxon history of Ickham? Of course you would:

'Offa, king of Mercia, in the year 791, gave to Christ-church, in Canterbury, fifteen plough-lands in Ickham, Perhamsted, and Roching; and in several dens in the forest of Andred, the pannage of hogs, which he granted free from all secular service and regal tribute, which was afterwards increased by one Athelward, who in the year 958, gave more lands here to that church. After which this manor continued part of that church's possessions, and on the division made by archbishop Lanfranc between himself and the priory, it was allotted to the share of the latter; accordingly, in the survey of Domesday, it is thus entered:
In Dunebafort hundred, the archbishop himself holds Gecham. It was taxed at four sulings. The arable land is twelve carucates. In demesne there are three, and twenty-nine villeins, with sixty cottagers having sixteen carucates and an half. There is a church, and four mills of one hundred shillings, and thirty five acres of meadow, and wood for the pannage of thirty hogs. The whole manor was worth, in the time of King Edward the Confessor and afterwards, twenty-two pounds, now thirty-two pounds. Of the land of this manor, William his tenant holds as much as is worth seven pounds.'

Everywhere in this part of Kent, you see the influence of Canterbury. We're far in the east here, and it's a surprise to me that the king of Mercia ever owned land here, powerful as Offa was. You see there was a church here as far back as the Domesday Book, but the present building is thirteenth-century. Look as its spindly spire: 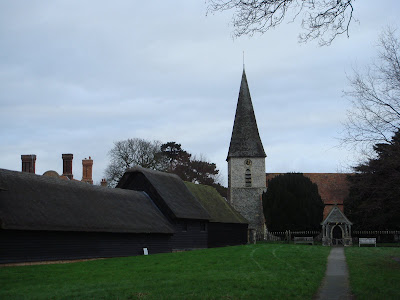 I bet the person who built that was proud of it. The chimneys are part of a charming redbrick Elizabethan (I guess) house which was so pretty it almost distracted me from the church. This is a great part of the world for the game of "imagine if we lived there." 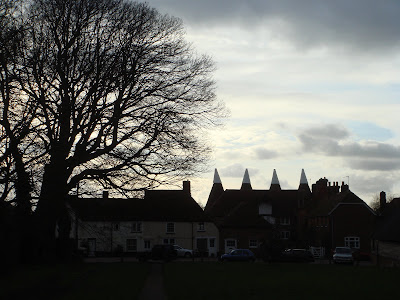 This is the view looking back from the church across the green - see how dark it was at three in the afternoon! The white-tipped towers, in case you're not familiar with this most Kentish of sights, are oasthouses, for the drying of hops. Nothing could be more evocative of the Garden of England. 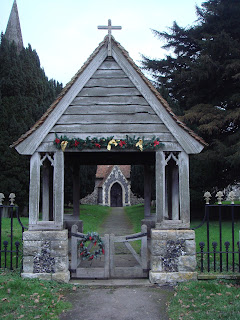 It was beginning to feel ominous, what with the dark and the cold and the bare tree-branches stretched out to the sky, but the church seemed a refuge from it all... 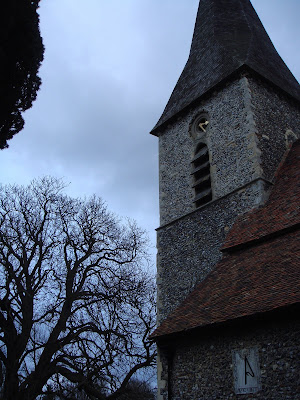 ... until we couldn't find the lights in the church. It looked like this: 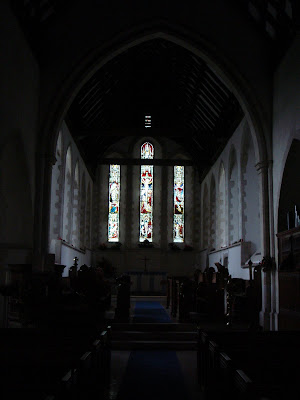 This is, of course, really the best way to view medieval churches - they weren't built with electric light! - but it is also quite a shock. You feel your way around, trying to make out the monuments in the dim light; dependent on those high windows, able to see only what they show you. Imagine coming to Evensong on a winter's night like this, walking across the fields in the damp or in the snow, with only that thin spire to show the way; and the darkness in the church, with pools of candlelight, and shadows and vaults of blackness beyond the light. 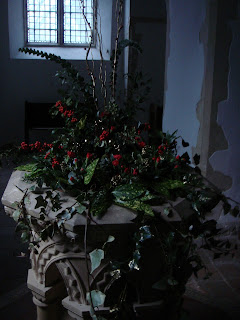 There was a large Christmas tree on one side of the nave, and I got a little obsessed with trying to capture on camera how strange and surreal it was in the near-dark to brush against the branches of an almost invisible tree. They often say that a cathedral is like a forest; well, here the pillars and the tree really were soaring up together. I felt like Lucy in the wardrobe, pushing past the fur coats and suddenly finding herself among the fir trees.

I loved the way the glass ornaments looked against the window-light: 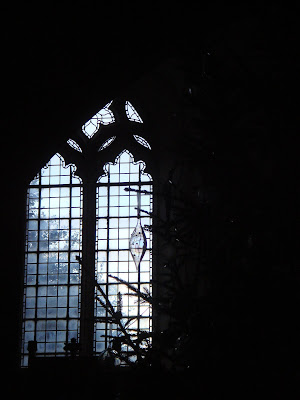 Nothing could be more different from the April day we went to Wickhambreaux, basking in the light and colour of its extraordinary windows, surrounded by the lilies of Easter; the last day of the year is a very different place. It has its own beauties. 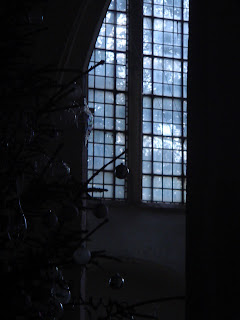