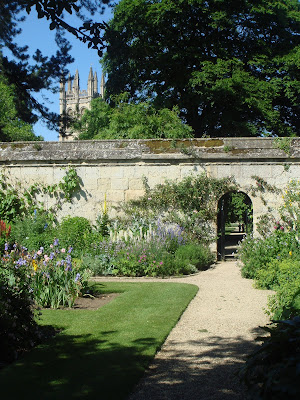 The weather this weekend has been beautiful, and even I - usually an avoider of heat and sunshine - was tempted to believe that summer can be a lovely thing, after all. What do we do here when the sun begins to shine?
- sit by the river in Christ Church, with Dickens for company, and watch people punt by. Only a few of the people punting actually know what they're doing. They're the ones who stare at the water with a dogged, fierce concentration as if they're training for the Olympics; everyone else is muddling along in fits and starts, bumping into other boats, all cheerfully apologising to each other as they go.
- drink Pimms in a pub garden in a little village which is only ten minutes' walk from the city centre, but which feels like the middle of the countryside.
- sing (badly) in a chapel lit by stained glass, where for once the candles aren't the brightest light in the place, and which for once feels pleasantly cool instead of chilly.
- eat in a busy, noisy, bustling dining hall, on benches packed tightly by lines of students in their black gowns.
- play croquet in on a grassy quad as the dusk is falling.
- read medieval history in a graveyard, because it's too sunny to stay in the library.
Posted by Clerk of Oxford at 9:48 pm

Lovely, but where is it?

It's a view of the tower of Magdalen college from the Botanical Gardens.

Heavens above, how you evoke past experiences in those places!