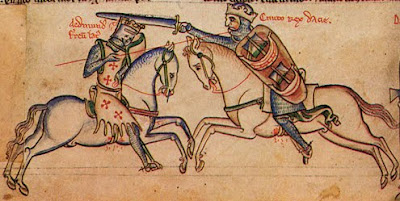 I was reminded today of my favourite story about Cnut, king of Denmark, Norway, part of Sweden, and (most importantly to me) of England from 1016 to 1035. Even for a Viking, Cnut was seriously cool, and not just because of the size of that empire: he ruled in England (unlike some other Conquerors one could mention) with an emphasis on continuity in administration, law and religious practice which shows not just an ability to recognise the benefits of a sophisticated society like late Anglo-Saxon England, but also excellent political acumen. There seems to have been almost no rebellion against Danish rule after he became king. During his lifetime he kept his empire together with remarkable diplomacy and skill, not just by brute force; it only began to disintegrate after his death, which suggests a great deal about his personal strength of character. I'm quite attracted by the sense one gets from stories about him that he was given to grand political gestures, of which the most famous is the legend about ordering the waves to obey him to demonstrate to his followers the futility of earthly kingship.

The wave story is probably apocryphal, but there's an earlier story which may well be true, since it is attested in some form in a very early source (the Encomium Emmae Reginae, an account of his life which is also fascinating for what it suggests about his relationship with his wife, the mother of Edward the Confessor). To me it's a particularly intriguing combination of Christian and what you might call natural justice. It might be relevant to bear in mind that Cnut may well have been a teenager at this point.

Background: in 1016, Edmund Ironside*, son of Æthelred the Unready, fought numerous battles against Cnut and his Danish army, but was eventually forced to agree to divide England so that he and Cnut would each rule half the country. Shortly afterwards Edmund was murdered, and his death was widely attributed to an Anglo-Saxon ealdorman, Eadric Streona. Eadric had been powerful under Edmund's father Æthelred, and in all the surviving sources, he has the very worst of reputations: treacherous and disloyal, always willing to betray his companions for the chance of personal gain, and blamed for various underhand political murders. Basically he was a really horrible man and a notorious traitor.

Cnut and Edmund had agreed that when either of them died, the other would become king of the whole country. The story goes that Eadric saw the opportunity for a great reward from Cnut if he killed Edmund and helped Cnut to rule England, so he arranged for Edmund's death.

Cnut then became king. Eadric went to him and reminded him what he had done, confidently expecting a high reward. He greeted Cnut boldly: "Hail, whole king, you who yesterday were only half a king; may you reward the promoter of your wholeness."

Cnut, pretending not to understand him, replied: "Good God*, tell me who has been such a great friend to me, so that I may set him higher than all his comrades?" Eadric answered proudly, "Myself."

Cnut called one of his earls to him and said, "This man shall be paid what we owe him," and said to Eadric, "As a reward for so great allegiance I will set you higher than all the leading men of the English." He immediately took up a battle-axe and cut off Eadric's head with one blow, and ordered the head to be set on a stake on the highest tower in London.

Highest, get it? Classic Viking joke.

* best nickname ever? I think so.
* or some rather less Victorian oath
Posted by Clerk of Oxford at 10:40 pm