For the first Sunday of Advent (already!) here is William Herebert's translation of the Latin hymn 'Conditor alme siderum'. This hymn is from the seventh century, and the translation by Herebert is from the beginning of the fourteenth (Herebert, who was a Franciscan friar and lecturer in Theology at Oxford, lived c.1270-1333).

I've given an inter-stanzaic modern 'translation' of Herebert's translation, so you can see how his version works. The rhyme-scheme is pretty variable and, for reasons not clear to me, he switched to a six-line stanza for verses 3 and 4, before going back to the four-line stanza.

By the way, Herebert's four-line verses can, just about, be sung to the tune above! (With some creative pronunciation...)

[Holy Creator of the stars bright, the everlasting light of right belief, Christ, who ransomed mankind by force, hear the prayer of humble creatures.]

[You had pity on a world lost to death through sinful conduct; you saved mankind, give remedy to the guilty.]

3. Toward the wordles ende
Thy wylle was t'alende
In on maydenes bour.
Ase spouse of chaumbre alone,
Out of that clene wone
Thou come t'oure honour.

[As the world drew to its end, your will was to dwell in a maiden's bower. As a bridegroom coming forth alone out of his chamber, you came from that pure dwelling-place for our salvation.]

[To his great power the knees of all creatures bow together, of heaven and of earth also, and acknowledge that he alone is worthy to be honoured.]

[Holy God, we pray to you who shall judge this world, spare us from our wicked foes, save us at that time.]

[Praise, worship, power and glory to the Father and the Son, and to the Holy Ghost who ever dwells with them.] 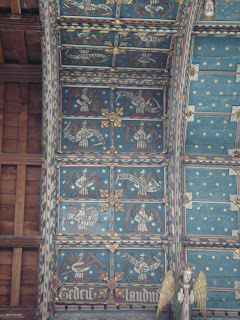 A medieval 'starry height' on the ceiling of the church at Southwold, Suffolk.


Now here's the Latin hymn (Herebert, obviously, used this older form of the hymn, before it was revised to this in 1632. For a comparison of the two versions, go here.): 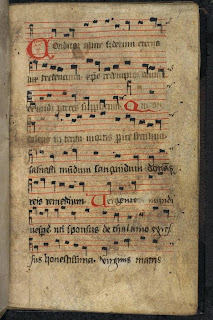 
1. Creator of the starry height,
Thy people's everlasting Light,
Jesu, Redeemer of us all,
Hear thou thy servants when they call.

2. Thou, grieving that the ancient curse
Should doom to death a universe,
Hast found the medicine, full of grace,
To save and heal a ruined race.

3. Thou cam’st, the Bridegroom of the bride,
As drew the world to evening-tide;
Proceeding from a virgin shrine,
The spotless Victim all divine.


[These two verses are sometimes found as:

2. Thou, sorrowing at the helpless cry
Of all creation doomed to die,
Didst come to save our fallen race
By healing gifts of heavenly grace.

3. When earth was near its evening hour,
Thou didst, in love's redeeming power,
Like bridegroom from his chamber, come
Forth from a Virgin-mother's womb.]


4. At thy great name, exalted now,
All knees in lowly homage bow;
All things in heaven and earth adore,
and own thee King for evermore.

5. To thee, O Holy One, we pray,
Our Judge in that tremendous day,
Ward off, while yet we dwell below,
The weapons of our crafty foe.

6. To God the Father, God the Son,
and God the Spirit, Three in One,
laud, honor, might and glory be
from age to age eternally.

I can't ascertain whether those alternate verses are also by Neale or are the work of the editors of Hymns Ancient and Modern, which is where I got them from. Four points struck me about Herebert's translation:

- When I posted Herebert's translation of 'Veni Creator Spiritus' I talked about his choice of shuppere to translate the Latin creator. Here he's translating conditor, 'builder, establisher, constructor', and he chooses wrouht. This is the noun wright (from Old English wyrhta), which just about exists in Modern English as the second element in words like wheelwright, playwright, i.e. '-maker'. It no longer exists as a noun in its own right (as it were...). It's also related to the verb which is only now found in the past participle wrought, 'made' (and then only in archaic contexts; my mind goes to 'stablish the thing, O God, that thou hast wrought in us'). So this is a word connected with craftmanship, creation in the most literal, physical, hands-on sense; as far as I can tell this makes it a very good equivalent of the Latin conditor, more exact than Neale's creator.

- likewise, in verse 2 bote is a spot-on translation of remedium. The Middle English word bote has a range of meanings which include 'cure' or 'remedy' in the medical sense (cf. Neale's medicine), but also 'salvation, rescue', and, further, 'amends, redress, atonement'. The Old English word for 'penance' is 'daed-bote', literally 'amendment made by action'. So there is a triple sense here: medicine for the sick, salvation for the guilty, and redemption of the lost.

- Herebert translates sponsus de thalamo as spouse of chaumbre (of = from). Neale has bridegroom from his chamber, which I assume he chose in order to emphasise the parallel with Psalm 19, which contains the line, in what would have been the translation most familiar to him, "In them hath he set a tabernacle for the sun, which cometh forth as a bridegroom out of his chamber". Bridegroom derives from an Old English word meaning literally 'young man about to be married' (groom is from OE guma, 'man') and it's fairly common in Middle English, including with application to Christ. The alternative spouse, which came into English from French, did not mean, as it does today, only someone who is already married, but anyone 'espoused' to marry. Like bridegroom, this is often applied to Christ in Middle English religious writing.

- verse 5 asks God to deliver us from "oure fykel foh", i.e. the devil. Fickle had a much stronger meaning in Middle English than it does today; though it had the meaning of 'unstable, untrustworthy', the older and more prevalent meaning was 'wicked, false, treacherous'.


And that concludes today's lesson on historical linguistics.
Posted by Clerk of Oxford at 2:13 pm

I wanted to thank you for posting Browning's "Memorabilia". I was looking for a page containing it to link on the memorial site of a friend who died recently and unexpectedly on a certain moor with a name of its own.

However, I have looked around your blog a little more and decided that I should read it regularly anyway. Do you know Jon Jarrett of Queen's? If so, say hello to him from me.

Dear Thomas,
You're welcome! I'm glad the poem was helpful to you. Do stick around and read often - that's always encouraged here ;)

Hi Clerk . I have an old tapestry with a hymn on it . can i send you a photo of it . Maybe you can help me figure out what it says. Thank you in advance.....not sure how to post a photo here? Rob

I'd be happy to help - leave a comment with your email address (it won't be published) and I'll get in touch with you.