'Amidst sweet dreams of disembodied names' 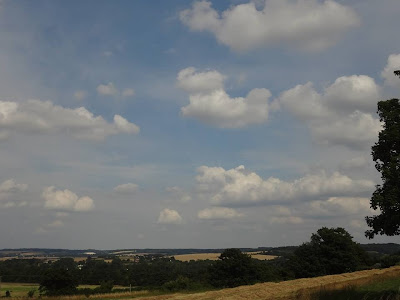 In this sweet field high raised above the Thames
Beneath the trenched hill of Sinodun
Amidst sweet dreams of disembodied names
Abide the setting of the August sun,
Here where this long ridge tells of days now done;
This moveless wave wherewith the meadow heaves
Beneath its clover and its barley-sheaves.

Across the gap made by our English hinds
Amidst the Roman's handiwork, behold
Far off the long-roofed church; the shepherd binds
The withy round the hurdles of his fold;
Down in the foss the river fed of old,
That through the long lapse of time has grown to be
The little grassy valley that you see.

Rest here awhile, not yet the eve is still,
The bees are wandering yet, and you may hear
The barley mowers on the trenched hill,
The sheep-bells, and the restless changing weir,
All little sounds made musical and clear
Beneath the sky that burning August gives,
While yet the thought of glorious Summer lives.

Ah, love! such happy days, such days as these,
Must we still waste them, craving for the best,
Like lovers o’er the painted images
Of those who once their yearning hearts have blessed?
Have we been happy on our day of rest?
Thine eyes say "yes," but if it came again,
Perchance its ending would not seem so vain. 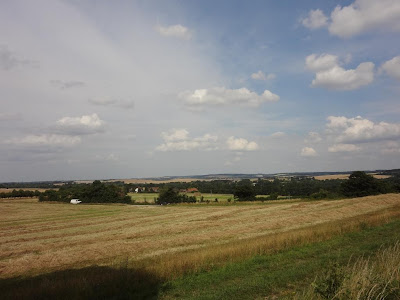 This is a poem William Morris wrote in August 1867, while on holiday near Day's Lock, on the Thames in Oxfordshire.  'The trenched hill of Sinodun' is better known (to me, anyway) by the more homely name of Wittenham Clumps, two distinctive hills which overlook the river and the nearby village of Dorchester-on-Thames, whose 'long-roofed church' is mentioned in the poem. Sinodun was the Celtic name for this group of hills, which over the centuries have been ploughed from one ridge into two little knobs (hence 'the gap made by our English hinds').  But it was a hillfort long before that, in the Iron Age, and even the name 'Sinodun' means 'Old Fort' (or so I'm informed), so it was already old two thousand years ago.  The Romans encamped here too, and so the Saxons, when they came, called it 'Dorchester'; then they built a church which became a cathedral, and then an abbey. 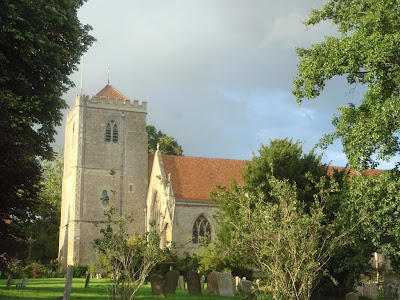 I learned of the existence of Morris' poem from a wonderful website called 'Where Thames smooth waters glide', which I thoroughly recommend if you're interested in English history, archaeology and literature in the Thames valley. The last three verses of this poem were published in the August section of Morris' The Earthly Paradise; the first verse was cancelled, but is printed in the introduction to volume 4 of the 24-volume Collected Works of William Morris, edited by his daughter May.  In her introduction she describes the visit to Dorchester:

To the wanderer over the Downs, the two hillocks may be landmark and companion for many solitary hours of wayfaring across the wide sweeps that fade from gold to distant blue.  In a first stanza, which was struck out, the place lives again to anyone who knows it well...  Thus have I seen it, the corn-land mellow under the burning August sun, on cross-country travelling from London to our Kelmscott home.  But the first time we youngsters saw Sinodun Hill was on a delightful river-journey we made from the house in Hammersmith up the Thames to Kelmscott.  For some reason, we had not much time at Dorchester, but I remember that my father insisted on us children going up to see the entrenchments - and eager enough were we to fill in the long and happy days with any new delight.  The passionate interest he took in these things impressed itself on us, and the strangeness of that first sight of the ancient earthworks, linked with the simple explanation given us of what they meant, will always hang about the picture my mind retains of them.  It was already twilight as we clambered over the rough grass, and back to the river and our company: the colour had gone out of the world, and as I look back trying to live again the impressions of the evening, something of the ancient people seems to have lingered in the hushed uncertain evening time, and the momentary oppression and melancholy of it come over me once more as I write. 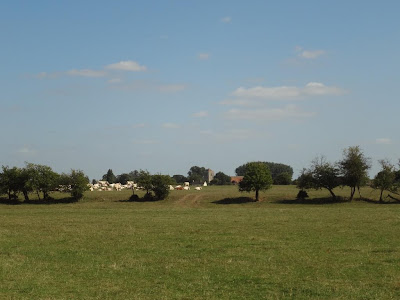 I was at Day's Lock two weeks ago and it looked exactly like the scene Morris describes - including the 'moveless wave' of the unharvested golden meadow. As we sat by the river we could hear across the fields the bells of Dorchester Abbey, ringing a special peal to celebrate the birth of the new baby prince. It was a vivid reminder of the here and now, but in the 'long lapse of time' these hills have seen, the century and a half which separates my visit and Morris' seems like very little space.  The names and the landscape itself tell a much longer story. 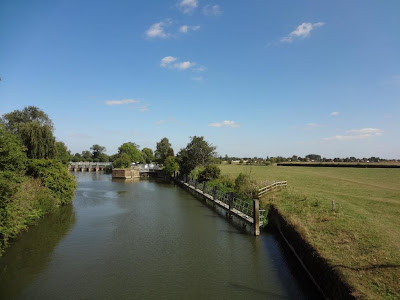 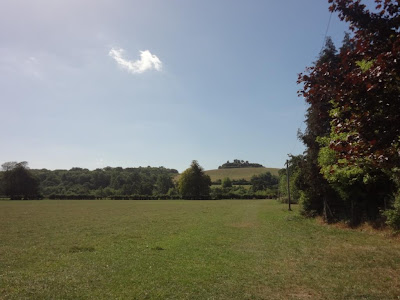 I find that phrase 'disembodied names' a curious one - all names are disembodied, in so far as they are only words.  Are they disembodied because the people who gave them to the landscape have disappeared?  Or because the landscape has changed while the names have not?  But if the name adheres to the landscape, and holds with it the memory of the people who gave it - just as the landscape shows their traces and trenches - the relationship between them is a more intimate one, entwined so closely as to be almost inseparable. The hills body forth the names. What's more, this specific landscape itself is particularly like a body, as some of the less respectable nicknames for Wittenham Clumps make clear. Or maybe I only thought of this because I've been working a lot lately on Norse mythology, and in the Norse creation myth the earth was created from the body of the slain giant Ymir: the hills are made of his bones, the sky of his skull.  I wonder what the people who camped at Dorchester in the Iron Age thought the hill was made of. 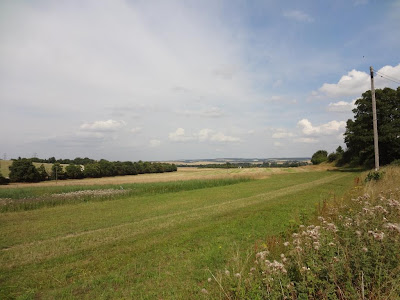 A few days ago I was in another part of the Thames valley, a little way to the south of Dorchester, where the river meets the Ridgeway and the Icknield Way.  These too are part of the area's pre-Roman, even pre-Celtic history, trackways really almost literally as old as the hills, which run cross-country from Dorset to East Anglia (for details, see the Ridgeway and the Icknield Way). This picture and the two at the top were taken from the Ridgeway, looking north towards Dorchester.  It's an ordinary-looking road; if I were an archaeologist I might be able to tell there was something ancient about it, but otherwise all it has to distinguish it is the name - and such names! The roads cross the river at a gap in the hills - a natural one, this time - which is logically-yet-poetically called the Goring Gap. Goring is the village on the Oxfordshire side of the river at this crossing-place; on the other side, in Berkshire, is Streatley, which got its name from those very 'streets'.  To the Anglo-Saxons, who did not build paved roads, the relics of paved Roman trackways which crossed Britain were foreign enough to need a foreign name - stræt, from Latin strata. Like William Morris, the Saxons were conscious of the presence of previous builders in the landscapes they inhabited, but where he and we can muse on Celts and Romans and settlers and shepherds, the Saxons who gave names to most of these places could only look back at an impenetrable mist of history.  They called Roman ruins like the streets of Streatley eald enta geweorc, 'the ancient work of giants' (or ents, if you prefer), not I think because they necessarily believed that only giants could make such things, but because living amid the relics of a civilisation visibly great and powerful, yet irredeemably past and gone, makes one feel like a child scrambling up into a king's high seat - small, and insignificant.  Perhaps this was what the Norse poets meant when they wrote about the earth being made from the body of Ymir. Their giants could make even the gods look small, and since the world, backwards through time and onwards through space, is so much greater than the little part of it that we can see, it can only be the work of giants.
Posted by Clerk of Oxford at 11:21 pm