Blessed Mary, moder virginall,
Integrate mayden, sterre of the see,
Have remembraunce at the day fynall
On thy poore servaunt now prayng to thee. 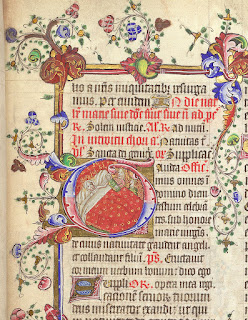 This is a fifteenth-century two-verse prayer to the Virgin, fairly straightforward but appealing in its simplicity. The poem is from Oxford, Bodleian Library, Douce 1 (SC21575), a manuscript of Latin and English prayers intended for private devotional use. Here's a modernised version of the poem:

Blessed Mary, mother virginal,
Integrate maiden, star of the sea,
Have remembrance at the day final
Of thy poor servant now praying to thee.

Mirror without spot, red rose of Jericho,
Close garden of grace, hope in disparage, [disgrace, trouble]
When my soul the body parts fro [from]
Protect it from mine enemies' rage.


Integrate means 'perfect, spotless', and close 'enclosed', as in the hortus conclusus of the Song of Songs. Most of the phrases in this poem similarly are English translations of established titles for the Virgin, such as 'maris stella', 'star of the sea', and 'mirror without spot', which comes from Wisdom 7:26. They conjure up beautiful imagery - I particularly like 'close garden of grace', and 'red rose of Jericho'. The latter title comes from a mixture of scriptural (cf. Ecclesiasticus 24:18) and pious tradition: the rose mentioned in the Biblical verse was identified with a plant found (to quote the OED) 'in arid deserts of south-west Asia and north-east Africa, the dried fronds of which unfold under the influence of moisture'. A plant which, seeming to be dead, can yet be restored to life was quite naturally called a 'resurrection plant', and one popular association with the Virgin was described in the seventeenth century by Sir Thomas Browne in his Pseudodoxia Epidemica:

The Rose of Jericho, that flourishes every year just about Christmas Eve, is famous in Christian reports; which notwithstanding we have some reason to doubt, and are plainly informed by Bellonius, it is but a Monastical imposture, as he hath delivered in his observations, concerning the Plants in Jericho. That which promoted the conceit, or perhaps begot its continuance, was a propriety in this Plant. For though it be dry, yet will it upon imbibition of moisture dilate its leaves, and explicate its flowers contracted, and seemingly dried up. And this is to be effected not only in the Plant yet growing, but in some manner also in that which is brought exuccous and dry unto us. Which quality being observed, the subtilty of contrivers did commonly play this shew upon the Eve of our Saviours Nativity, when by drying the Plant again, it closed the next day, and so pretended a double mystery: referring unto the opening and closing of the womb of Mary.


A Middle English text roughly contemporary with the poem above explains an alternative legend:

Ioseph arose and toke þe childe and his modir and ȝede in to Egipt in þe nyȝt; and þere he was til herodes was dede. and ȝe schul vndirstonde þat oure lady seynt Marie and her soone dwellid in Egipt .vij. ȝere. and Egipt is fro Bethleem .xij. dayes iourney. And in þis wey þat oure lady seynt Marie ȝede in to Egipt, and in þe weye þat sche come aȝene, growe drye roses þe wich be cleped þe roses of Ierico, and þes roses growe in no place of aƚƚ þe contrey but onlich in þe same weye. and þes rosys scheperdis of þe contrey þat go aboute with her schepe, þei gadir hem in tyme of ȝere and selle hem for brede to pilgrimes and to oþir men of þe contrey aboute; and so þei be bore in to diuers londis aboute.


[Joseph arose and took the child and his mother and travelled into Egypt by night, and there he stayed until Herod was dead. And you shall understand that Our Lady St Mary and her son dwelt in Egypt seven years, and Egypt is from Bethlehem twelve days' journey. And along the way that Our Lady St Mary went into Egypt, and the way that she came back again, grow dry roses which are called the roses of Jericho, and these roses grow in no place in all that country except by that road. And these roses shepherds of that land, who go about with their sheep, gather at the right time of year and sell for bread to pilgrims and to other men of the country round about, and so they are carried abroad into many lands.]

'Dry roses which are called the roses of Jericho...'  They sound much prettier than they look. 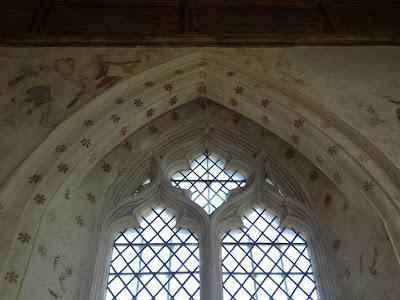 In the church dedicated to St Mary in Chalgrove, near Oxford, the elaborate scheme of wall-paintings in the chancel depicts scenes from the life of the Virgin, on a background of red flowers. Such flowers are associated with the Virgin in Middle English verse, as in the poem 'A full fair flower is the lily', where each of the petals represents a virtue (charity, chastity, etc.). I don't think these ones are supposed to be 'red roses of Jericho', but they almost could be. 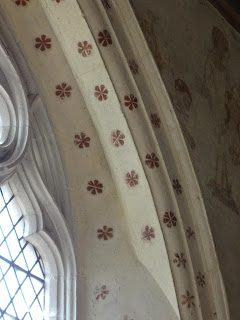 The rosettes decorating the window are in fact red lilies identified by their six petals.