Some Kent Churches: The Stained Glass of Stowting

I spent the second half of August in Kent, and in that two-week period I managed to visit a grand total of twenty-three village churches - pretty good going, I think. Despite the fact that I've been enthusiastically church-visiting in Kent for the past ten years or so, almost all of these churches were new to me. This is a direct result of the fact that I recently acquired the Kent volume of Arthur Mee's series 'The King's England', which finds something nice to say about literally every village in the county and therefore introduced me to all kinds of interesting places off the beaten track. (It was Arthur Mee who led me to beautiful Nackington in April - I never would have found it without him, and that's why my post on Nackington has such an Arthur Mee-ish title!). I took lots of photographs of these churches, and so I must warn you that the next few weeks on this blog are going to be little more than 'what I did on my holidays', except it's 'amazing medieval things I saw on my holidays'. You have fair warning.

Each one of these churches is unique, and I could write a detailed post about each of them.  But let's start with a place where the pictures speak for themselves: Stowting, a little village in south Kent, between Ashford and Dover.  It's no tourist attraction; it doesn't have a particularly distinguished history, and the eighteenth-century Kentish antiquarian Edward Hasted described the area in no very appealing terms thus:

Stowting is situated in a wild and forlorn country, for the most part on the great ridge of chalk, or down hills which cross this parish. The church stands in the vale, at some small distance southward from the foot of them... In this part the hills are very sharp and frequent, the soil barren and very flinty, consisting either of chalk, or a poor reddish earth, mixed with quantities of flint stones; and here there is much rough ground and poor coppice wood, and a very comfortless dreary country, which continues for several miles northward, on each side the Stone-street way, towards Canterbury, throughout which, if the country cannot boast of wealth, yet it can of being exceeding healthy, as all the hills and unfertile parts of this county in general are.


It didn't feel like a 'comfortless dreary country' on the sunny day I went, but it's certainly not somewhere you would go unless you were looking for something.  Which I was - led by Arthur Mee.  The village church, dedicated to St Mary, is hidden away behind the village school, and you feel a little like a trespasser as you scuttle past the school gates to get to the church.  The church too is not particularly distinguished, and a victim of Victorian restoration. Essentially, it's an ordinary English village church. 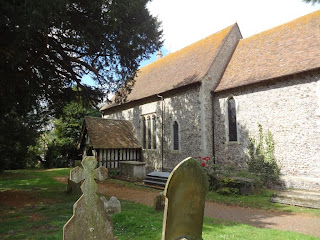 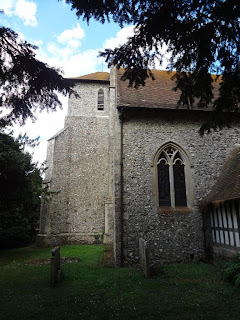 Except that there's really no such thing as an ordinary English village church. At first sight Stowting looks uninteresting enough inside, rather dark and plain: 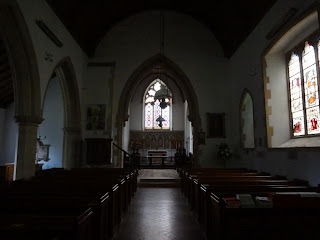 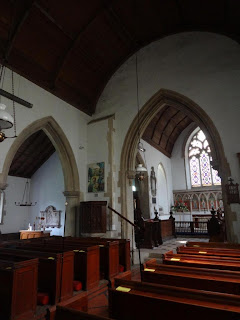 But what Arthur Mee had promised me, and what Stowting provides, are two extraordinary examples of medieval stained glass. Here's the first: 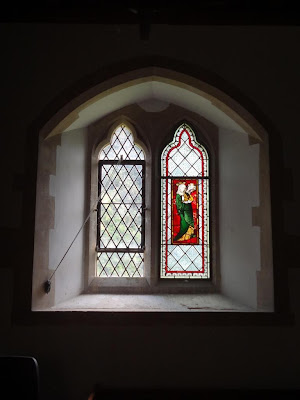 This is a fourteenth-century Virgin and Child, in green and gold. 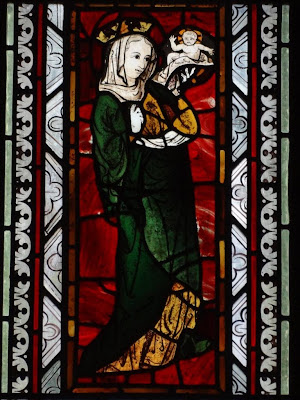 The odd proportions of the baby notwithstanding, he's beautiful - those fingers, and eyelashes!  And the colours are gorgeous. 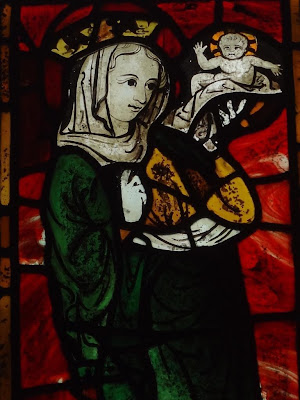 The church guide called this window the 'Green Madonna', in a rather affectionate tone - and how could you not love her, if you lived with her in your church? 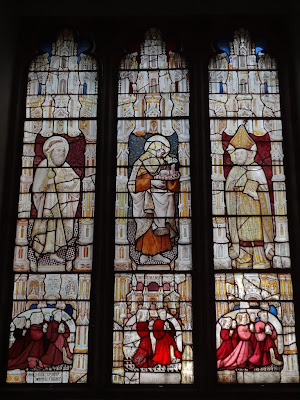 The other window is not quite as immediately endearing, but it's special all the same.  This is fifteenth-century, and what's remarkable about it is its completeness. Did it survive intact precisely because Stowting is such an out-of-the-way kind of place? The three saints are, from left to right, St James, attired as usual like a medieval pilgrim, with cockleshells on his hat and staff and scrip in his hand: 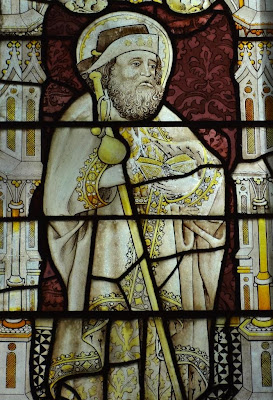 To the right of the shell on his hat is a pilgrim's badge which looks an awful lot like those produced in great numbers at nearby Canterbury for travellers to the shrine of Thomas Becket (compare this and this).

In the centre is John the Baptist, with lamb and book: 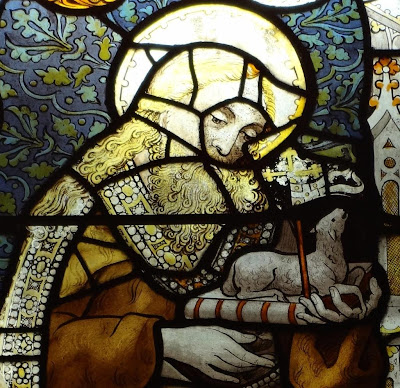 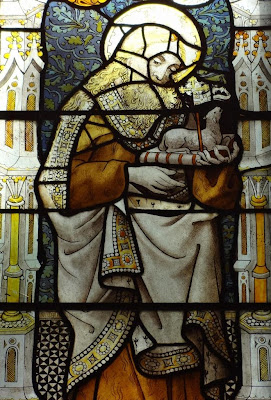 And the third is identified as St Augustine, though I'm not quite sure why: 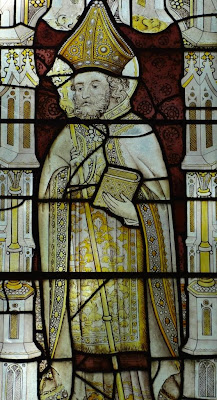 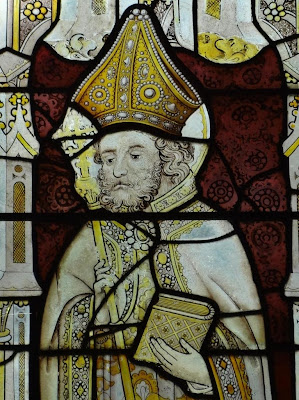 Below the saints are the people this window memorialises. The central couple, who are surrounded on each side by their children: 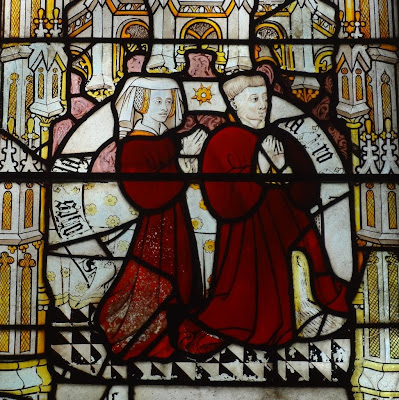 These are Richard Stotyne and Juliane his wife, for whose souls this scroll in the adjoining panel enjoins us to pray: 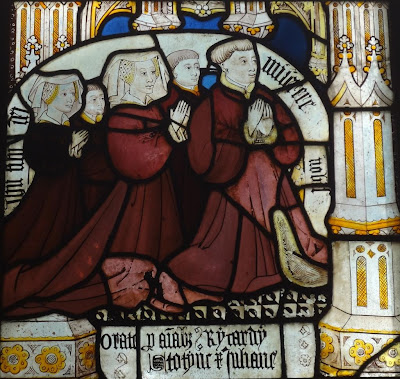 The text around the children reads 'Jesu, Fili Dei, miserere nobis'. On the other side: 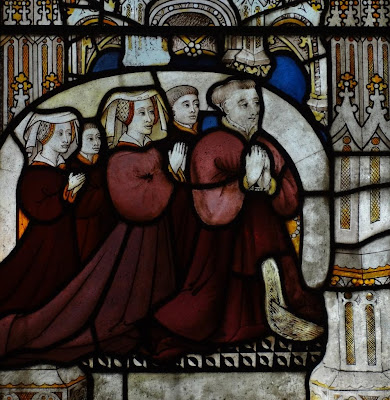 More pictures of the church: 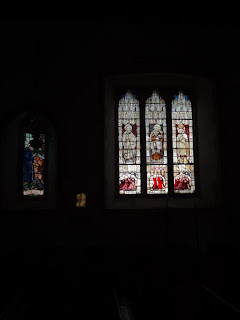 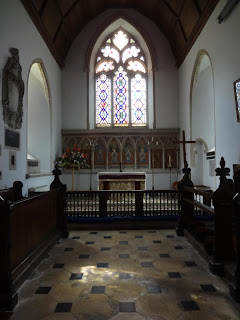 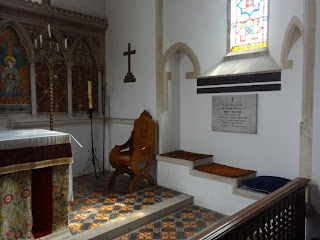 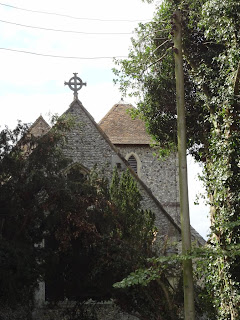 I wish I could tell you something more about these windows, or about this church, but my attempts at further research have been unprofitable.  I did try; it's pretty much a maxim of mine that knowing more about something helps you to appreciate it more, and I always feel readers will judge me if all I have to say is 'look at this - I don't know anything about it, but isn't it beautiful?'  As a result, I have lots of half-written posts like this one sitting in my drafts folder, full of pictures of wonderful things I have seen and want to post about but don't feel I have enough information on.  It's kind of disheartening.  For the next few weeks I'm just going to brave your judgement and post photos without much in the way of context except 'I found this thing here'; so don't ask any follow-up questions, OK...
Posted by Clerk of Oxford at 5:12 pm

This style of plain English county church became a model for many 19th century Episcopal churches across the sea.

I wonder if you "green madonna" might have started out as St. Anne with the infant Virgin Mary. But then color iconography was not set when this lovely window was made.

As for St. Augustine--How far is this little village from Canterbury? I would assume that any mitered bishop would be called Augustine if it is in close proximity to Canterbury.

It's about ten miles from Canterbury, and I'm sure you're right about that being the reason for the identification with Augustine! I would have just expected to see a more obvious iconographical 'hint', since there are various other possibilities.

It looks as thought the bishop's window is probably 15th century. I would assume that it was made in honor of one of the sainted Archbishops of Canterbury. Is there something about the way he is dressed that might give one a clue as to his identity? Did not all of the first half dozen or so archbishops become saints? Then later there was Dunstan and Lanfranc and Anselm. I would have to mention Becket at well. If you have a moment, I would love to hear your thoughts on identity.

Do you know why the Puritan Dowsing missed these, especially since the ordinances were directed as images of saints, Virgin Mary, etc.?. It had not dawned on me until I read an article recently that Dowsing was careful to spare windows with historic figures and all the heraldic windows because these windows were not covered by the 1643 and 1644 ordinances.

I meant to add a comment about John the Baptist. I am always a bit bemused to see the man known for his hair shirt and leather girdle who ate honey and locusts dressed in a bejeweled cloak. John the Baptist's face is one of the more tender and expressive representations that I have ever seen of him. Those windows are a real treasure.

As I said in the post, I wasn't able to find out much about the early history of this church, and I really have no idea why these windows survived. It's just a happy accident, I suppose.

As for the archbishop, Augustine is more likely than anyone else - Becket is the other possibility, but you'd perhaps expect him to have some symbol of martyrdom. I'm not aware of many 15th-century depictions of Augustine in the area, whereas Becket is found everywhere in Kent, as you would expect!