'Thou wandrest in this fals world'

Ne tristou to this world, hit is thi ful vo.
The rich he makith pouer, the pore rich also;
Hit turneth wo to wel and ek wel to wo.
Ne trist no man to this world, whil hit turnith so.
Lollai, lollai, litil child, thi fote is in the whele.
Thou nost whoder turne to wo other wele.

Child, thou ert a pilgrim in wikidnis ibor,
Thou wandrest in this fals world, thou loke the bifor.
Deth ssal com with a blast vte of a well dim horre
Adamis kin dun to cast, him silf hath ido befor.
Lollai, lollai, litil child, so wo the worth Adam
In the lond of paradis, throgh wikidnes of Satan.

Child, thou nert a pilgrim bot an vncuthe gist,
Thi dawes beth itold, thi iurneis beth icast;
Whoder thou salt wend north or est,
Deth the sal betide with bitter bale in brest.
Lollai, lollai, litil child, this wo Adam the wroght,
Whan he of the appil ete and Eue hit him betacht.

This is the saddest poem I know. I'm only posting it today because I haven't posted here in a week, and I want to post something, but I'm too sad to think at the moment and this poem is all I have right now. It comes from a fourteenth-century manuscript, BL Harley 913, and you can see a list of the other poems contained in the same manuscript here. I remember the first time I read it, as an undergraduate, and how it went straight into my heart and stuck there. Translating the poem takes away some of its power, and you don't need to understand everything to get the sense of it (I think when I first read it, before I knew much Middle English at all, the strangeness was part of the attraction). So here's a kind of half-translation.

Animals, and birds, and fishes in the flood,
And every living creature made of bone and blood,
When they come into the world they do themselves some good -
All but the poor wretch that is of Adam's blood.
Lullay, lullay, little child, to sorrow art thou bemette; [destined]
Thou knowest not that this world's wild before thee now is set.

Child, if should happen that thou shouldest thrive and the, [prosper]
Think how thou wert fostered at thy mother's knee.
Ever have mind in thy heart of those things three:
Whence thou comest, what thou art, and what shall become of thee.
Lullay, lullay, little child, child lullay lullay,
With sorrow thou came into this world, with sorrow shalt wend away.

Trust not thou to this world, it is thy foul foe.
The rich it maketh poor, the poor rich also;
It turneth woe to weal and eke weal to woe.
Let no man trust to this world, while it turneth so.
Lullay, lullay, little child, thy foot is in the wheel;
Thou knowest not where it shall turn, to woe or to weal.

Child, thou art a pilgrim in wickedness born,
Thou wanderest in this false world; look thyself before.
Death shall come with a blast out of a dark black door,
Adam's kin down to cast, as he has done before.
Lullay, lullay, little child, such woe for thee wrought Adam
In the land of paradise, through wickedness of Satan.

Child, thou art not a pilgrim but an unknown guest,
Thy days are counted out, thy journeys are cast;
Wherever thou shalt wander, north or east,
Death shall wait for thee with bitter bale in breast.
Lullay, lullay, little child, this woe Adam for thee wrought,
When he of the apple ate and Eve it him betaught. [gave it to him] 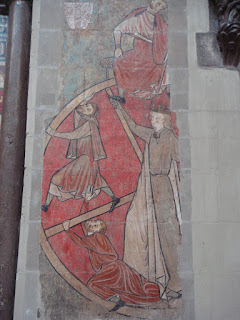 This poem was probably my first encounter with the idea of the Wheel of Fortune (well, as anything other than a gameshow, I suppose). It's such a common image in medieval literature, but it's somehow very vivid here - I think it's the phrase 'thy foot is in the wheel', which makes you feel how quickly a sudden jolt could send anyone flying from joy into misery. And to say it to a child! There's something utterly horrible, and yet completely astonishing, about the idea of speaking to a crying baby as if it is weeping for all the sorrows of the world; it's horrific, and yet somehow beautiful.

I couldn't pick a favourite line from this poem, although Child, thou nert a pilgrim but an uncuthe guest would probably be a strong contender. uncuthe means 'unknown, alien'; you are not a purposeful pilgrim but a strange guest wandering around the wilds of the world, not known or wanted anywhere. It makes me think of this bit from Ancrene Wisse:


uncuth in uncuththe, a stranger in a strange land.
Posted by Clerk of Oxford at 11:36 pm