It's time for the next installment in my series of posts marking the 1000th anniversary of the Danish Conquest of England. This series, which began with the arrival of Svein Forkbeard in the summer of 1013, has now been running for more than two years; we've tracked a story of invasions, retreats, broken alliances, murders, marriages, and more. Telling this story in real time has given me (and you too, I hope) a vivid sense of just how complex and drawn-out this long conquest was - if it feels like this series has been going on for a long time, imagine how it felt to Æthelred and Cnut...

In the last post in this series, back in July, we saw the English aristocracy in chaos while Cnut, temporarily driven back to Denmark, prepared to re-invade. King Æthelred's son Edmund Ironside broke away from his father, apparently in reaction to the murder of two of his friends by one of the king's closest advisers, Eadric. In the late summer or early autumn of 1015, Cnut returned, as the Anglo-Saxon Chronicle (E) tells us:

[Then before the Nativity of St Mary [8 September] the atheling journeyed from the west north into the Five Boroughs and rode at once into all Sigeferth and Morcar's territory, and the people all submitted to him. And at the same time King Cnut arrived at Sandwich, and immediately turned around Kent into Wessex until he came to the mouth of the Frome. Then he raided in Dorset and in Wiltshire and in Somerset. At that time the king lay sick at Cosham. Then ealdorman Eadric gathered an army, and [so did] the atheling Edmund in the north. When they came together, then the ealdorman planned to betray the atheling, and so they parted without a battle and gave way to their enemies. And ealdorman Eadric then enticed forty ships away from the king, and submitted to Cnut. The West Saxons submitted and gave hostages and provided the army with horses, and they were there until midwinter.]

A lot happened very quickly that autumn. All this is written with hindsight, as a few details make clear - the reference to Cnut as 'King Cnut', for instance, though he was not at this point king of either England or Denmark. Perhaps it's hindsight, too, which leads the chronicler to note that Æthelred was ill; he would die the following April, and by this time was perhaps already too weak to resist the invading Danes, treacherous Eadric, or his own rebellious son. Imagine him lying sick at Cosham as the Danish ships sailed along the south coast, so close by.

With Æthelred out of action, the English resistance faltered between Edmund and Eadric, who were uneasy allies at the best of times. We'll hear a lot more about Eadric in the months to come; he later gained a reputation (not entirely undeserved) as one of Anglo-Saxon England's most notorious traitors, accused of all kinds of lurid crimes. If you believe some twelfth-century writers, pretty much everything that went wrong in England between the years 1000 and 1017 was directly or indirectly the result of Eadric's sheer evilness, from the St Brice's Day massacre to the death of St Ælfheah to the invasions of Svein and Cnut. No one could really be quite as treacherous as Eadric was later said to be; but whether or not he indeed planned to betray Edmund at this point in 1015, he did choose this moment to submit to Cnut with his forty ships. Since he was close to the king and one of the most powerful ealdormen in the country, it must have been a blow to both Æthelred and Edmund. (He later came back again. Then defected again. But that's all still to come...) 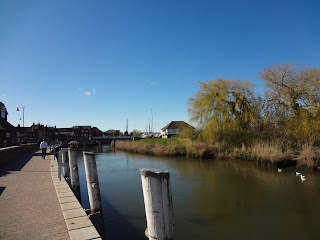 Sandwich harbour, no Vikings in sight.
And what about the Danes? In previous posts we've been able to turn to the Encomium Emmae Reginae to give us a Danish(ish) perspective on events, to balance the English(ish) view provided by the Anglo-Saxon Chronicle. But at this point in the story the Encomium is, while fascinating as ever, not much help to us, because it drastically telescopes the long period between Cnut's return to England in 1015 and his first encounters with Edmund in battle in the summer of 1016. Just after describing at length the splendour of Cnut's fleet (as seen in the last post), our encomiast gets through ten months of history in considerably fewer than ten sentences:

And so in good order and with a favourable wind [the fleet] touched at Sandwich, which is the most famous of all the ports of the English, and after they had dropped anchor, scouts went ashore in boats, and having made a very rapid examination of the immediate neighbourhood, returned to the familiar ships, and reported to the king that thousands of opponents were present in readiness. For the natives, burning most fiercely to renew the war against the king and the Danes, had assembled squadrons which they believed to suffice them for the struggle, and gathered together and acting as one pressed on, doomed to die at the hands of the nobles.

(I have no hesitation in saying that there were not 'thousands of opponents' awaiting the Danes when they landed at Sandwich! But as a native of East Kent I like 'most famous of all the ports of the English'; thanks for that, encomiast.)

Then Thorkell, observing the time to have come when he could demonstrate his fidelity to his lord, said: "I will undertake to win this fight for my lord with my troops, and will not permit my king to be involved in this battle, very eager to fight as he is, inasmuch as he is a youth. For if I be victorious, I will win on the king's own behalf; but if I fall or turn my back, it will not be to the glory of the English, for the reason that the king will be left, and he will give battle again, and perhaps as a victor will avenge my injuries." Since this seemed to all to be good reasoning, he disembarked with the king's approval, and directed his force against the army of the English, which was then assembled at the place called Sherston.

The battle of Sherston wasn't fought until after midsummer of the following year, June 1016, so this really does cut out a lot of the story. We'll have to leave the Encomium to one side for a while. It chooses to describe a short, sharp invasion, not a long campaign; written twenty-five years after these events, it smooths over the complicated story of shifting allegiances, including those of its patron Emma herself (and having written two years' worth of posts trying to explain them, I do sympathise). There's an exception, though, when it comes to Thorkell. The Encomium is very ambivalent about Thorkell, and recounts, without managing to reconcile, entirely contradictory interpretations of his behaviour. At times, as here, he is shown vigorously protesting his loyalty to Cnut (over-protesting, perhaps), and at times the author admits that many people doubted his fidelity. I like to think this suggests he was still a bit of a touchy subject in the Anglo-Danish court in the early 1040s, when the Encomium was written; by that time Thorkell himself had been dead for years, but many people were still around who had known him (including members of his family) and were perhaps still talking about him. It was probably difficult to work what exactly he had done when, and why.

It's natural to tell the story of the Danish Conquest as a tale of opposing kings: first Æthelred vs. Svein, succeeded by their respective sons, Edmund vs. Cnut. But these extracts from both the Chronicle and the Encomium remind us that it is as much the story of two influential, independent-minded, and somewhat unpredictable commanders: Eadric and Thorkell, who each at various times allied themselves with first one king, then the other. Their loyalties, their defections, and their decisions will play a big part in what we'll see unfold over the coming year. 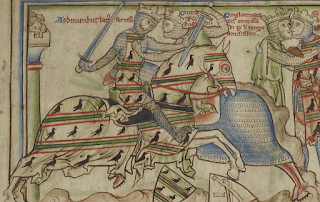 Email ThisBlogThis!Share to TwitterShare to FacebookShare to Pinterest
Labels: The Danish Conquest: 1000 Years