'And thanne mette I with a man, a myd-Lenten Sonday' 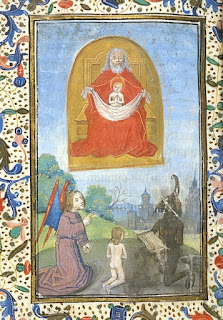 Something to read on Mid-Lent Sunday, from Piers Plowman.

And I awaked therwith, and wiped myne eighen,
And after Piers the Plowman pried and stared,
Estward and westward I waited after faste,
And yede forth as an ydiot, in contree to aspie
After Piers the Plowman - many a place I soughte.
And thanne mette I with a man, a myd-Lenten Sonday,
As hoor as an hawethorn, and Abraham he highte.
I frayned hym first fram whennes he come,
And of whennes he were, and whider that he thoughte.
"I am Feith,' quod that freke, "it falleth noght me to lye,
And of Abrahames hous an heraud of armes.
I seke after a segge that I seigh ones,
A ful bold bacheler--I knew hym by his blasen.'
"What berth that buyrn,' quod I tho, "so blisse thee bitide?'
"Thre leodes in oon lyth, noon lenger than oother,
Of oon muchel and myght in mesure and in lengthe.
That oon dooth, alle dooth, and ech dooth bi his one.
The firste hath myght and majestee, makere of alle thynges:
Pater is his propre name, a persone by hymselve.
The secounde of that sire is Sothfastnesse Filius,
Wardeyn of that wit hath, was evere withouten gynnyng.
The thridde highte the Holi Goost, a persone by hymselve,
The light of al that lif hath a londe and a watre,
Confortour of creatures--of hym cometh alle blisse.
So thre bilongeth for a lord that lordshipe cleymeth:
Might, and a mene his owene myghte to knowe,
Of hymself and of his servaunt, and what suffreth hem bothe.
So God, that gynnyng hadde nevere, but tho hym good thoughte,
Sente forth his sone as for servaunt that tyme,
To ocupien hym here til issue were spronge -
That is, children of charite, and Holi Chirche the moder.
Patriarkes and prophetes and apostles were the children,
And Crist and Cristendom and alle Cristene Holy Chirche...

I hadde wonder of hise wordes, and of hise wide clothes;
For in his bosom he bar a thyng, and that he blissed evere.
And I loked in his lappe: a lazar lay therinne
Amonges patriarkes and prophetes pleyinge togideres.
"What awaitestow?' quod he, "and what woldestow have?'
"I wolde wite," quod I tho, "what is in youre lappe."
"Lo!" quod he - and leet me se. "Lord, mercy!" I seide.
"This is a present of muche pris; what prynce shal it have?'
"It is a precious present," quod he, "ac the pouke it hath attached,
And me therwith," quod that wye, "may no wed us quyte,
Ne no buyrn be oure borgh, ne brynge us fram his daunger;
Out of the poukes pondfold no maynprise may us fecch
Til he come that I carpe of: Crist is his name
That shal delivere us som day out of the develes power,
And bettre wed for us wage than we ben alle worthi -
That is, lif for lif - or ligge thus evere
Lollynge in my lappe, til swich a lord us fecche."
"Allas!' I seide, "that synne so longe shall lette
The myght of Goddes mercy, that myghte us alle amende!'
I wepte for hise wordes. 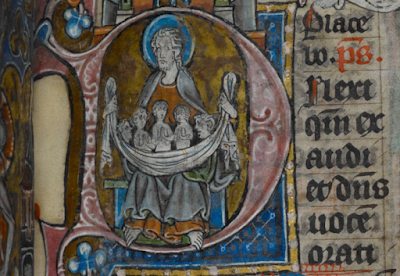 And with that I awoke, and rubbed my eyes,
and after Piers the Plowman peered and stared about;
eastwards and westwards I looked for him,
and went forth like a fool, searching the region
for Piers the Plowman; many a place I sought.
And then I met with a man, on mid-Lent Sunday,
white-haired as a hawthorn-tree, and Abraham was his name.
I asked him first whence he had come,
and where he was from, and where he was going.
"I am Faith," said that man, "it befits me not to lie;
a herald of arms in Abraham's household.
I seek for a man I saw once,
a most bold knight - I knew him by his blazon."
"What does that warrior wear," I asked, "as bliss betide you?"
"Three figures in one person, none larger than another,
of one degree and power in length and in breadth.
What one does, all do, and each does alone.
The first has power and majesty, maker of all things:
Father is his proper name, a person in himself.
The second of that lord is Truth, the Son,
guard of all who have wits, who ever was without beginning.
The third is called the Holy Ghost, a person in himself,
the light of all that live on land and on water,
comforter of creatures - of him comes all joy.
So three attributes belong to a lord who lordship claims:
might, and the means of expressing his might,
his own and his agent's, and what sustains them both.
So God, who never had beginning but what seemed good to him,
sent forth his Son, to be servant for a time,
to busy himself here until issue be brought forth -
that is, the children of charity, with Holy Church the mother.
Patriarchs and prophets and apostles were the children
And Christ and Christendom and all Christians are Holy Church...'

[He goes on to discuss the Trinity further, and tells some of Abraham's story.]

I wondered at his words, and at his voluminous clothes -
for at his bosom he bore something which he kept blessing.
And I looked within his cloak: a leper lay there,
among patriarchs and prophets playing together.
"What are you waiting for?" he asked, "and what is it you want?"
"I want to know," said I, "what is in your cloak."
"Look," he said, and let me see. "Lord, mercy!" I said.
"That's a precious gift; for what prince is it intended?"
"It is a precious gift," he said, "but the devil has seized it -
and me, as well," said that one, "and no ransom may redeem us,
nor can anyone pay our bail or free us from his power;
no payment of surety can take us out of the devil's pound,
until the one comes whom I speak of: Christ is his name,
the one who shall deliver us, some day, out of the devil's power,
and pay a better price for us than we are all together worth:
that is, life for life. Else we would lie thus for ever,
lolling in my lap, until such a lord saved us."
"Alas," I cried, "that sin so long should hinder
the might of God's mercy, which might us all amend!"
I wept for his words. 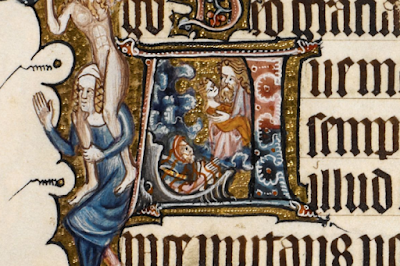 What the dreamer meets on this Mid-Lent Sunday is an old man, his hair as white as a hawthorn-tree in spring blossom, with a cloak wrapped around him, and within the fold of his cloak (his 'lappe'), against his breast, some miniature people. These are the souls of the dead, the righteous who had died before the coming of Christ, waiting in a place of comfort until Christ's incarnation can save them. The idea of these souls resting 'in the bosom of Abraham' comes from the parable of the rich man and Lazarus, and it was a popular subject in medieval art. In Piers Plowman, the combination of the idea with Abraham's explanation of the nature of the Trinity strikingly echoes an image found in medieval English alabaster, such as this beautiful example (follow the link for more images):

The souls here rest in a cloth held between the arms of God the Father, who has his hand raised in blessing. He holds the crucified Christ between his knees, with a symbol of the Holy Ghost marked above the cross. This way of depicting the Trinity, known as a 'Throne of Mercy' image, is common in medieval art, but this combination with the Bosom of Abraham is found only in English alabaster. 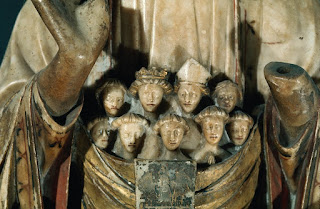 Piers Plowman brings this kind of iconography unforgettably to life, as we see the 'patriarchs and prophets playing together' in Abraham's lap. The little naked souls in these images look like children, and in the poem they are called 'the children of charity, with Holy Church the mother'. They are 'patriarchs and prophets', people of dignity, fathers and begetters - but here they are imagined as infants held against a parent's breast. Like children they 'loll' in Abraham's lap, happy enough but helpless 'til such a lord us fetch.' It's a tender, maternal image, fitting for this moment in the liturgical year, as the poem is starting to run towards Jerusalem to re-enact the events of the Passion. The Epistle for Mid-Lent Sunday speaks of the two children of Abraham, and of 'Jerusalem our mother'; and in part for this reason, the Fourth Sunday of Lent has traditionally been kept as Mothering Sunday in Britain. Mothering Sunday is first recorded nearly three hundred years after Piers Plowman was written, but the language here is unmistakably maternal: Abraham holds the souls against his breast and is constantly 'blissing' them, like a mother soothing and comforting her baby. There's something very poignant about Abraham's tenderness and the little creatures' vulnerability; no wonder it moves the dreamer to tears. 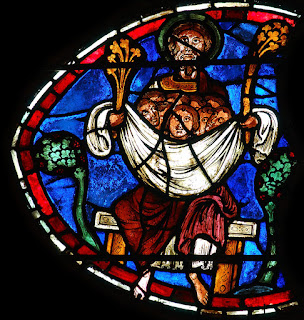 The story of Dives and Lazarus, as told in an English folk-song:

And reimagined by Vaughan Williams:

Nice to see the link to the Young Tradition.

What wonderful images and an excellent Lenten selection. Reading the Middle English aloud is a pleasure, so is listening to and comparing Vaugn Williams and the music from which he based his work. Thank you.

Thank you for the words and music.

This is much the world, too, of the O Antiphons of Advent, but is this world of pre-Nativity and then still pre-Passion-and-Resurrection also (at least in part) an image of other things, as well, like Purgatory, and even the Dantesque awaiting of the Souls of the Blessed for (re)union with 'the Holy and Glorious Flesh'?

That folk song is just spine-tingling, thanks :)

It is the question of whether Jesus was talking about real people or whether it's a parable of something and, if something, what exactly.

Why for that matter did Dives call Abraham father, and why did Abraham call Dives son?

These are, to me, the most beautiful lines from your shared excerpt, lovely in form and meaning.

What sweet, innocent, dear smiles on the "children of charite" in the Nottingham icon (seen close-up at your provided link).

Beautiful thoughts for Passiontide. This also led me to the interesting Wikipedia article--Bosom of Abraham--which weaves the idea of Abraham's Bosom to St. John Apostle leaning against Jesus' bosom at the Last Supper. (See, also, the tender note regarding Wordsworth, under the "In Literature" heading.)

All very moving. I will be pondering this for days. Thank you. A blessed Passiontide to you.