'That we may sing without ending' 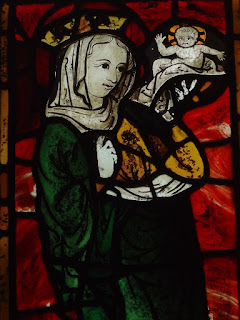 Virgin and child (Medieval stained glass, Stowting, Kent)
Regular readers of this blog will know that I have a soft spot for medieval carols, which - despite the associations the term may have for many people today - were not confined to the Christmas season. There are carols for all seasons of the year, on subjects sacred and secular, serious and light-hearted, and most things in between. (If you're in the UK you can watch me talking about this subject on the Easter Sunday edition of Songs of Praise, should you wish to...)

There are numerous medieval carols about the Passion of Christ, but not quite so many for the Easter season, for some reason. But here's one carol which seems appropriate for Eastertide. It comes from the collection of carols put together by the Canterbury Franciscan James Ryman in 1492, and it's a macaronic text which takes its Latin lines from the Marian antiphon used in the season of Easter, Regina caeli:

Queen of heaven, rejoice, alleluia,
For He whom you were merited to bear, alleluia,
Has risen, as he said, alleluia.
Pray for us to God, alleluia.

James Ryman's extensive collection of carols can be read in full online. It contains many carols in praise of the Virgin, and a fair number making use of a 'Regina caeli' refrain - I've posted two examples before here and here. They all cover pretty much the same ground, naturally, but they are variations on a theme - they experiment with different imagery, different ways of integrating Latin and English lines, and so on. Here's a more extensively macaronic example, which is a skillful piece of work. The following carol is not quite so difficult, but I like it for of its clever use of internal rhyme, which nicely echoes the form of the antiphon's rhyming third line (Resurrexit, sicut dixit). The Latin and English play out their own antiphonal structure of verse and response, and they work beautifully together - if you mentally translate the Latin phrases as you read, you'll see that in every verse they fit perfectly with the sense of the English lines, which is not an easy trick to accomplish! It feels like there's something playful about those chiming rhymes, even in a carol which is serious and devotional.

This is in modern spelling for ease for reading, but the Middle English can be found here.

King Assuere, thy son so dear,
Quem meruisti portare,
In bliss so clear he hath no peer,
Regina caeli, laetare.

Since thy son is the king of bliss,
Quem meruisti portare,
With him and his thou shalt not miss, [shall not fail to be]
Regina caeli, laetare.

That lord so good, with so mild mood, [disposition]
Quem meruisti portare,
Upon the rood shed his heart’s blood,
Regina caeli, laetare.

O lady free, glad mayst thou be,
Quem meruisti portare,
As he told thee, arise did he,
Regina caeli, laetare.

By thy sweet child, so meek and mild,
Quem meruisti portare,
Man, that was wild, is reconciled;
Regina caeli, laetare.

That lord and king to bliss us bring
Quem meruisti portare,
That we may sing without ending:
Regina caeli, laetare.

The reference in the second verse to 'King Assuere' is an allusion to the Biblical story of Esther, who was considered to be a typological figure of Mary as Queen of Heaven - a reminder that Ryman and any reader of his carols could be expected to have a sophisticated understanding of theology and Biblical exegesis.

Ryman's carols don't come with music, sadly, though this one feels more than usually singable. (With voices clear laudeth in fere...) But for some related music, you could do worse than listen to this jolly carol from half a century earlier than Ryman, or Byrd's Regina Caeli, from just over a hundred years later. 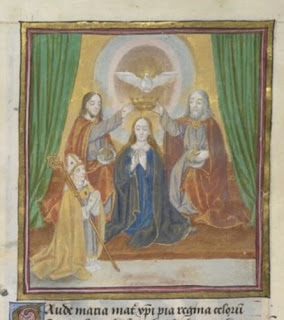 Lovely stuff. Do you think the chiming rhymes you mention were designed to aid mystical meditation; is there any reference to that? Thanks, as ever.

Interesting thought, I hadn't considered that!

I have passed this along to our church choir director. Perhaps he will compose a tune for a carol!

What a rich and delightful post! (And nice to see and hear you for the first (even outside the UK - thanks to One of the Usual Suspects, shall we say?): by the way, is that carol sung in New College to be readily heard in full anywhere online?)

"Behold and see, O lady free" - perhaps I am being overly ingenious, but I've read sermons about the Virgin being one of the first to see the Risen Lord (I think, interpreting Matt.28:1-10 this way) and wondered if this carol might be imagining that event? (It does remind me of versions of the 'Stabat Mater' poems, too.)

And, am I muddled, or does 'Sing We To This Merry Company' sound very like the Agincourt carol?

(By the way, based on the linked Middle English edition, it looks like you have misread 'quere' [= 'choir'] in line 29 - but perhaps you are silently correcting Zupitza on the basis of the manuscript: the image of the Heavenly Queen joining with other voices to laud "that Lord so dear" is a splendid one!)

Thanks for spotting that - scribal error on my part. I've corrected it. Here's a link to 'In vernali tempore': https://www.youtube.com/watch?v=V3IdY3d3oe8