The Danish Conquest, Part 9: Bloodshed in the North 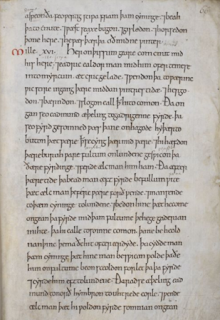 1016 was a dramatic year in England. On this blog we've been marking the 1000th anniversary of Cnut's conquest of England by following the course of this long-drawn-out conflict, and in the spring of 1016 things were finally coming to a head.

In the last installment, back in the autumn, we saw Cnut returning to England from Denmark with his fleet and raiding across Wessex. Meanwhile, King Æthelred was ill, and at odds with his son Edmund Ironside; the king's closest advisor, the Mercian ealdorman Eadric streona, had just defected to the Danes (not for the last time).

Six months on, the situation was not looking much better for Edmund and the English. Early in 1016, with Cnut's forces now increased by the addition of Eadric's ships, Edmund began to summon up an army, but he could not look for much help from his ailing father. The Anglo-Saxon Chronicle (E) begins its entry for 1016:

[In this year King Cnut came with his army of 160 ships, and Ealdorman Eadric with him, over the Thames into Mercia at Cricklade, and then turned into Warwickshire during the midwinter festival, and they raided and burned and slew all that they came to. Then the atheling Edmund began to gather an army. When the army was assembled, they would not be satisfied unless the king were there and they had the support of the garrison from London. So they gave up the campaign, and everyone went home. Then after the festival the army was commanded again, under full penalty, that every man who was able should come, and the king was sent to in London and asked to come to join the army with all the support he could gather. When they were all come together, it was no use, any more than it had often been before. Then the king was told that they were going to betray him, those who should have supported him; he left the army, and went back again to London.]

This picture of disorganisation and general mistrust among the English leaders is typical of the chronicler's narrative of these years (whether accurately or not), and he sounds especially jaded here. The Chronicle goes on:


[Then the atheling Edmund rode to Northumbria to Earl Uhtred, and everyone thought they intended to gather an army against King Cnut. They went into Staffordshire and into Shrewsbury and to [Chester], and they raided on their side, and Cnut on his; and [Cnut] then turned out through Buckinghamshire into Bedfordshire and from there to Huntingdonshire, along the fen to Stamford, and then into Lincolnshire, from there to Nottinghamshire, and so to Northumbria towards York. When Uhtred heard this, he left his raiding and hurried north, and submitted out of necessity, and all Northumbria with him, and he gave hostages; but nonetheless he was killed, and Thurcytel, son of Nafena, with him. And after this King Cnut appointed Erik as earl in Northumbria, just as Uhtred was, and afterwards went southwards by another route, down the west. And then all the [Danish] army came to the ships before Easter, and the atheling Edmund went to London to his father, and after Easter King Cnut went towards London with all his ships.]

Effectively this was Cnut's conquest of the north. The Chronicle only details his route up through the Midlands into Northumbria, but Scandinavian sources tell us that along the way he was fighting battles in 'green Lindsey', and at Hemingbrough in Yorkshire. No wonder Uhtred made haste to meet him! As the most powerful man in the north of England, head of the family who had ruled Northumbria from Bamburgh for several generations, Uhtred was an important ally of Edmund and Æthelred; his murder, supposedly committed under a promise of safe-conduct, delivered the north to the Danes. Sources disagree on the immediate cause of Uhtred's murder: the C version of the Chronicle blames it on the advice of Eadric streona (which seems possible, but is a bit suspicious, given the habit of blaming everything on Eadric streona). A later but better-informed northern source says that Uhtred was killed by a man with whom he had a long-standing feud, Thurbrand Hold, and that his death began a series of revenge killings which lasted right into the 1070s. It's sometimes hard to get a clear picture of what was going on in the complex world of Northumbrian politics, but it seems here that Cnut had waded right into the middle of it. In Uhtred's place Cnut appointed (perhaps not straightaway, but certainly by 1017) England's first ever earl, a word which now began to be used in England instead of ealdorman: the Norwegian Eiríkr Hákonarson, one of his most experienced supporters. 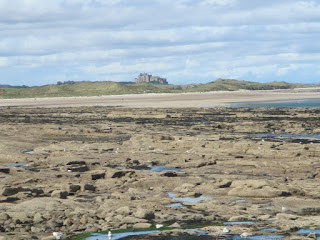 And down in the south, both armies were now converging on London, where by mid-April Æthelred was entering the last days of his life.
Posted by Clerk of Oxford at 12:38 pm

It looks like you are using the numeral 'seven' in place of the Tyronian et. Is this common, or are you fudging it because the limitations of html on a blog? There is a unicode for it (U+204A) but unfortunately it doesn't seem to be supported by many fonts, so a workaround is sometimes needed.

Is there an accepted standard expansion, e.g. 'ond'?

Sorry for the technical question! I'm just an amateur at reading OE and ON texts, but in my day job I work in informatics and data publishing so I do wonder how to deal with the character at home.

Yes, it's a fairly common workaround in informal contexts like this, but people do also often expand it to 'ond' or 'and'.

Deep tragedy. I love this strand of the blog. I'm wondering where was Godwin in this? Was he with Cnut, and if so is that why C was so strong [counterintuitively, to me] in Wessex itself?

Ah, that's a fascinating question! We can't really be sure, but it certainly seems possible he was already with Cnut. One 13th-century legend claims he went over to the Danes in the summer of 1016, after being recruited by Cnut's brother-in-law Ulf Thorgilsson - I'll look at that story in a later post...