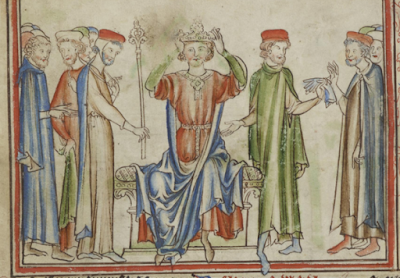 In the run-up to 14 October, an intrepid group of re-enactors are currently retracing the likely route of Harold Godwineson's march from York to Battle, via Lincoln, Peterborough and the Weald of Kent. Today they will be passing through Waltham, where (according to the abbey's twelfth-century chronicle) Harold stopped on his way to Hastings, and prayed before its Black Rood for a victory which would not come:


[Harold] had entered the church of the Holy Cross in the early morning, and placing upon the altar relics which he had with him in his chapel, he made a vow that if the Lord granted him success in the outcome of the war he would endow the church with a large number of estates as well as many clerks to serve God in that place, and he promised to serve God in the future like a purchased slave. Accompanied by the clergy, and with a procession leading the way, he came to the doors of the church where, turning towards the crucifix, the king in devotion to the holy cross stretched himself out on the ground in the form of a cross and prayed. Then occurred an event pitiable to relate and incredible from an earthly point of view. When the king bowed low to the ground the image of the crucified one, which had previously been looking directly ahead above him, now bowed its head as if in sorrow, a sign portending what was to happen.

Turkill, the sacristan, testified that he had seen this while he was himself collecting together and putting away the gifts which the king had placed on the altar, and that he told many people about it. I heard this from his very lips, and it was confirmed by many bystanders who with their eyes saw the head of the figure upright, though none of them except Turkill knew the moment it had bowed.

The Waltham Chronicle: an account of the discovery of our holy cross at Montacute and its conveyance to Waltham, ed. and trans. Leslie Watkiss and Marjorie Chibnall (Oxford, 1994), p.47.

This powerful miracle-story feels as if it was born of the same impulse of historical imagination as prompts re-enactors to retrace Harold's route today. To me one of the most poignant images of 1066 is the thought of that grieving marble figure, and Harold's unanswered, though miraculously acknowledged, prayer. 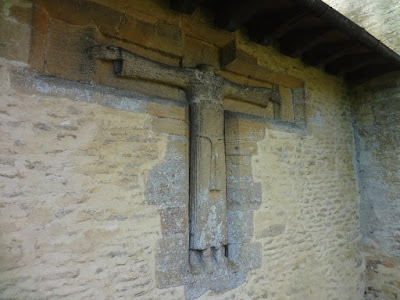 An Anglo-Saxon rood Harold Godwineson might have known (Langford, Oxfordshire)

However, we shouldn't forget this month's other conquest anniversary: 1000 years ago, in 1016, Cnut and Edmund Ironside were nearing the end of their long struggle to rule England. On this blog we have been tracking the route to the Danish Conquest since 2013, though sadly this hasn't involved any marching or voyages to and from Denmark ;) The 1000th anniversary of the final battle at Assandun is rapidly approaching (on 18 October), so here we can take a look at what led up to it, including Edmund Ironside's last victory over the Danes.

(If you're interested, I've just written an article about Cnut's conquest for the October issue of the BBC History Magazine, as well as an ebook on the Danish Conquest out later this month.)

The last post in this series looked at the battle fought between the English and Danish armies at Sherston in Wiltshire, just after Midsummer in 1016. If you were trying to trace Edmund Ironside's route between June and October, you'd be zigzagging all over the south of England - this is what the Anglo-Saxon Chronicle (C) says:


'Then for the third time [Edmund] gathered an army, and travelled to London along the north side of the Thames, and so out through Clayhanger, and he rescued the garrison and forced the raiding-army to flee to their ships. And then two days later the king crossed at Brentford and fought against the army and put them to flight, and there many of the English were drowned because of their own carelessness, because they travelled ahead of the army with the intention to plunder. And after that the king turned back to Wessex and gathered his army. Then the raiding-army straightaway went to London and besieged the town, and attacked it fiercely both by water and land, but Almighty God saved it.

The raiding-army then turned away from London with their ships into the Orwell, and there went up and travelled into Mercia and slew and burned whatever they came across, as is their habit. They provided themselves with supplies and drove their ships and their herds to the Medway. Then King Edmund gathered all his army for the fourth time and went across the Thames at Brentford and travelled into Kent, and the raiding-army fled before him with their horses into Sheppey, and the king killed as many of them as he could overtake. And Eadric the ealdorman then came to join the king again at Aylesford. Never was there a more unwise decision than that was. The raiding-army turned again up into Essex and went into Mercia and destroyed all that they passed over.'

This probably brings us to September or early October, though specific dates are hard to come by. Via London, Wessex, London (again), Mercia and East Anglia we've ended up in Kent. Battles at Brentford and in London, as mentioned in the Chronicle here, are also referenced in one of the Old Norse poems composed for Cnut, Óttarr svarti's Knútsdrápa:

'{Peace-breaker of shields} [WARRIOR], I believe you made the Frisians lifeless; you destroyed Brentford there with its inhabited settlement. {The noble descendant of Eadmund} [= Edmund Ironside] received dangerous wounds; the Danish army then pierced the host with spears when you pursued the fleeing.

Still you went forward, where you fought against metal weapons; the bow cried loudly; swords did not become blunt where you attacked the fortification. {Restrainer {of the leaping steeds of the roller}} [SHIPS > SEAFARER], you fought no less a battle in the shallows of the Thames; the wolf’s gums know that.'

The text and translation are from here (and I refer you to that splendid edition to answer such puzzling questions as 'what do Frisians have to do with anything?'). The fortification referred to in the latter stanza is clearly London; Cnut, 'ruler of ships', may have fed wolves with slaughtered Englishmen there but he did not manage to capture the city, now any more than back in May.

It was after this, when the Danes were heading back from London into Kent, that they met Edmund Ironside again. The place where Edmund 'killed as many of them as he could overtake', presumably as they went towards their base on the Isle of Sheppey, is not named in the Anglo-Saxon Chronicle, but is identified by John of Worcester as Otford near Sevenoaks, a crossing-place over the River Darent.

(By nice coincidence, Harold's band of re-enactors will be passing very close to Otford on 11 October, three days' march from Hastings.)

As Edmund was travelling from Otford further west into Kent he met Eadric Streona, formerly one of his father's closest allies, who had defected to Cnut around a year earlier. Edmund took Eadric back, a decision which the Chronicle (rarely critical of Edmund) condemns as unræd - 'lacking in wisdom'. That's the same 'unready' which gave Edmund's father his famous epithet; Edmund Ironside got a much better deal in the nickname stakes than poor Æthelred the Unready, but here he was perhaps displaying some of his father's skill for bad decision-making. John of Worcester comments 'had not the treacherous ealdorman Eadric Streona, with his wiles and the evil counsel that he should not pursue his enemies, held him back at Aylesford, he would have gained total victory that day'.

But instead the Danes moved from Kent towards Essex, with Edmund pursuing them to a hill called Assandun... 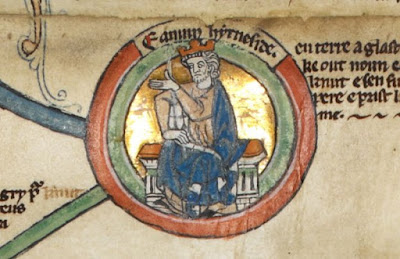 Edmund Ironside in a 14th-century manuscript (BL Royal MS 14 B VI)
Posted by Clerk of Oxford at 10:10 am