A Story of St Thomas Becket 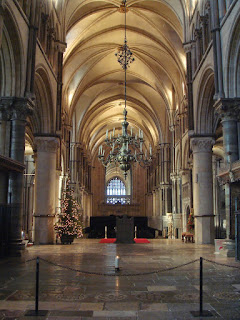 Today is the summer feast of St Thomas Becket - the feast of his translation, which took place on 7 July 1220. On that day (in the fiftieth year after his murder in 1170, a carefully chosen date), his relics were moved into a splendid new shrine in Canterbury Cathedral, where for three centuries they remained the destination of many pilgrims' journeys.

This would be a good day to read some of the medieval English songs and poems in Becket's honour, but here's a more modern Becket-themed story for the day. I found it in a fabulous book, The Lore of the Land, by Jacqueline Simpson and Jennifer Westwood - a magnificently comprehensive guide to English legends and local folklore which has given me many happy hours in the past few months. They say this story comes from a guidebook of 1907, and I suspect it is no older than that, though it's set in medieval Canterbury! Here's the story:


It seems that in the days when Canterbury was a great centre for pilgrimage, its inhabitants grew so rich and sinful that the Devil reckoned he would be justified in carrying the whole town off to Hell. On the other hand, so long as prayers were being said at the shrine of Thomas Becket he did not dare go near the place.

Eventually, one night the cathedral priests were too tired to keep vigil round the shrine, so the Devil swooped down, seized a large number of houses, and dropped them into the sea off the north coast of Kent. He then returned for a second armful, which he treated in the same way. But then St Thomas himself roused the Sacristan in a vision, urging him to ring Great Harry, the largest of the cathedral bells. This he did (the bell miraculously becoming so light that one man alone could move it), and the sound frightened the Devil into dropping his third armful of houses on the coast. Those whose inhabitants were more good than bad formed the town now called Whitstable, but the homes of the wicked fell into the sea just offshore and can still be seen there underwater.


Good work, St Thomas (and congratulations to the virtuous people of Whitstable!). Drowned villages and bells go together in legend - think of all those stories of villages drowned by lakes or the sea where the ghostly church bell can still be heard ringing beneath the waves - and perhaps that was part of the inspiration for this little story. On the topic of bishops and bells, I have to point out that the largest of Canterbury Cathedral's bells is actually not called Great Harry, but Great Dunstan - and since medieval sources tell us that St Dunstan was a bell-maker and a devil-fighter himself, the devil might well falter at the sound of his bell. Here he is on Youtube, even. (Bell Harry is the name of one of the smaller bells and of the tower where it hangs; it's named after the medieval prior Henry of Eastry.)

The other part of the inspiration for this story is probably the fact that the north Kent coast, where Whitstable lies, is prone to erosion, and the remains of drowned villages can indeed be seen out at sea. In 1907, when this story was recorded, the lost village of Hampton-on-Sea, between Whitstable and Herne Bay, was in the process of being rapidly swallowed up by the sea - though what can be seen there are not the wrecked homes of the wicked inhabitants of medieval Canterbury, but an ill-fated attempt to develop the local oyster industry. 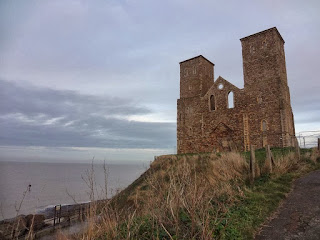 A little further down the coast are the remains of another drowned settlement, in this case one which goes back thousands of years. The towers above are the ruins of the medieval church of Reculver, which was the site of a Roman fort, and then by the seventh century a royal estate belonging to the kings of Kent. An abbey was founded there in 669, where some of the early Christian Kentish kings were buried. By the later Middle Ages it was a thriving town, but already losing a battle with the encroaching sea. The town dwindled to a village, and at the beginning of the nineteenth century the church had to be pulled down - only these towers remain, standing on a shore which is still being eaten away beneath them. Out at sea, somewhere, are the remains of the Roman fort and the medieval town. It's a faintly spooky place, at the end of a long and narrow road which leads here and nowhere else; persistent local legends tell stories of ghostly Roman soldiers on patrol, or the cries of unseen babies heard among the ruins.

The church bell doesn't sound beneath the waves; instead, Reculver's bell now hangs in the sweet little church at Badlesmere. Two columns from the original church - said to date from the 670s - were left for a while in an orchard, but were eventually rescued and translated to the crypt of Canterbury Cathedral. They don't hold anything up, but stand stranded near the place where Thomas Becket's body lay in the years between his death in 1170 and his own translation on this day in 1220. They are a relic of a church five years hundred years older than Becket - and they bring us full circle.
Posted by Clerk of Oxford at 12:39 pm