Barrow Mounds - and a Book! 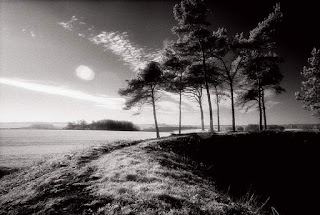 More than two months since I last posted on this blog! I don't think such a thing has ever happened before - but I return with some exciting news, so I hope you can forgive me ;) First, here's my latest column for History Today, about a landscape imbued with power and memory and the Viking army who defied its curse in 1006:

There are some historical events which only come sharply into focus when you stand on the spot where they took place. I was reminded of this recently when I visited an unassuming hillside mentioned in a memorable story in the Anglo-Saxon Chronicle, concerning something which happened during a Viking raid on southern England in the reign of Æthelred II. It is a slightly mysterious story, a glimpse into a long-vanished landscape of power that now only survives half-hidden in the name of a Berkshire barrow mound.

In the winter of 1006 a Danish army was ravaging Wessex, raiding its way through Hampshire and Berkshire without much effective resistance from the English. It sacked and burned the towns of Reading and Wallingford before travelling along the Berkshire Downs, finally reaching a place the Anglo-Saxon Chronicle calls ‘Cwichelmeshlæw’, that is, ‘Cwichelm’s mound’. There, it records, the army ‘waited for what they had been proudly threatened with, because it had often been said that if they reached Cwichelmeshlæw they would never get to the sea’. But the threatened response never materialised and the Danes did make it back to the sea, a ‘proud and undaunted army’ flaunting its spoils as it marched past the gates of Winchester on its way to its ships.

Cwichelmeshlæw (now called Cuckhamsley Barrow or Scutchamer Knob) was a significant local landmark, set in a landscape that by 1006 was already rich in history. It is a mound standing in a prominent position on the ancient track of the Icknield Way, high on the Berkshire Downs. Though probably a prehistoric barrow, it takes its name from Cwichelm, a seventh-century king of Wessex; Cwichelmeshlæw may have been believed to be his burial-mound or the site of one of his battles.


Read the rest here. The really exciting news, though, is that this piece is a sneak peek at my upcoming book: Dragon Lords: The History and Legends of Viking England, which will be published by IB Tauris at the end of April. In the book I examine a range of medieval narratives and legends about the Vikings in England, looking at how medieval audiences from the eleventh century onwards imagined England's history of Viking invasion, settlement and rule. These include the English legends about Ragnar Lothbrok and his sons (quite different from the Norse variety which you might know from Vikings!); Siward of Northumbria, the dragon-fighting earl descended from a bear; Lincolnshire's Danish hero, Havelok, and the founding of Grimsby; and stories about the Vikings in English folklore, from burial-mounds to blood-stained flowers. (Cuckhamsley Barrow is there, of course). Stay tuned for more details in the coming months!
Posted by Clerk of Oxford at 7:41 am

Welcome back! Your posts are much appreciated & have been greatly missed

Thank you. Cuckhamsley is an amazing place. It's a pity it's surrounded by trees, otherwise I think you could just about see the whole of (old) Berkshire, which is appropriate for the site of the Shire Court. I'm told its a Neolithic Long Barrow, but today it looks as if it has been reworked as a kind of amphitheatre and I wonder if that happened when it WAS the Shire Court. (I take it the Cwichelm is the one who sent an assassin the kill Edwin of Northumbria before he saw the light at Dorchester!)

Bob is all right said...

Ms. Parker: Congratulations on the upcoming publication of your book. Based upon your description, as well as the description (and the pre-publication reviews) on the I. B. Tauris website, it looks fascinating. I was delighted to see the laudatory comments by Heather O'Donoghue, whose book English Poetry and Old Norse Myth I greatly enjoyed. Again, congratulations!

Clerk of Oxford; Thank you for this article. Looking forward to the publication of your book.

Good to see you back, and look forward to hearing more about the book!

Glad you are back! Though there still plenty of posts in your blog I have not had a chance to read, I was looking forward to a new one. Congratulations on the book!

Fantastic news about the book! I look forward to buying a copy.

Very glad to see that you've posted again! I've never commented before, but I enjoy your blog very much. Congrats on the book--I look forward to reading it!