The Fates of the Sons of Ragnar 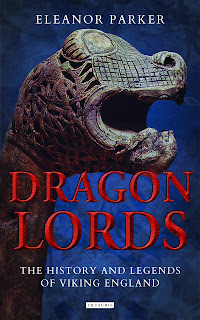 Publication day is fast approaching for my book, Dragon Lords, which explores a range of medieval legends about the Vikings in England. These legends - some well-known, others not at all - offer a kind of alternate history of the Vikings, as they were perceived by medieval English readers and story-tellers long after the end of the Viking Age. How did medieval writers imagine the Vikings intervening in English history, and where, and why? The answers to those questions are sometimes very surprising. I discovered all kinds of wonderful stories in the course of researching this book, and over the coming weeks and months I'll share a few of my favourites here...

Some of these legends were very popular in medieval England, and are widely recorded from across the country - for instance, the story of Havelok, a Danish king of England who (legend said) was brought up in poverty in Grimsby, is attested in a large number of sources and was generally accepted as historical fact. Other stories are recorded in detail, but only from one or two sources - so we know a version of the legend, but can't guess where else, or in what different forms, it might have been known. And then there are some which have to be reconstructed from scattered references and allusions, which attest to widespread interest in and tales told about particular Viking warriors, but don't give us anything like as detailed a story as we would wish to have.

In the last category, the most interesting example is the English legends about the sons of Ragnar Lothbrok, one of the best-known Vikings in Old Norse literature - especially famous today, of course, because of Vikings. That show and most modern tellings of the story are based (roughly) on the detailed legends of Ragnar and his many famous sons - Ivar the Boneless, Ubbe, Bjorn Ironside, and all the rest - recorded in medieval Scandinavian sources, texts which mostly date from the twelfth century and later. The historical origins of Ragnar himself are very uncertain, but Ivar and Ubbe and some of the other sons were certainly real people (not necessarily all brothers, nor 'Ragnarssons' in the earliest sources), who invaded, raided, and ruled in Ireland, England and elsewhere during the second half of the ninth century. They made a huge impact at the time, and in later sources they were among the most celebrated warriors of the Viking Age - famous for their notorious cruelty and wickedness as well as for their successful conquests. 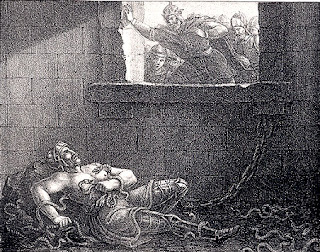 A 19th-century version of Ragnar's death

England, especially Northumbria, features prominently in the Scandinavian legends about Ragnar and his sons, because it was not only part of the Ragnarssons' area of rule but also the site of Ragnar's death. However, most of the stories you may know about Ragnar - how he got the name 'Lothbrok', his fights against serpents, his succession of warrior wives, his defiant last words as he lay dying in a snake-pit - are only recorded in the Scandinavian texts, and are not found at all in English sources. Medieval English writers do, however, record some different variations of the 'Lothbrok legend', and there are also stories attached to individual sons. It's clear from the surviving evidence that there's a connection between the Scandinavian traditions and the English ones, but we can't be sure exactly what that connection may be; since we're dealing with what was in origin almost certainly a collection of oral traditions, not written down until many years after they were first told, the surviving textual record doesn't necessarily help us to reconstruct where and when these stories developed. (Though there have been various theories!)

One key idea the traditions do have in common is that Ragnar - who is never actually called by that name in English sources, where he's only 'Lothbrok' - was killed, cruelly and perhaps unjustly, in England, and that his sons invaded England to avenge his death. In the book I look in detail at the different versions of this story, and explore what it seems to suggest about how medieval writers in eastern England - particularly East Anglia - interpreted Viking invasion rather differently from the standard view of most medieval historians. 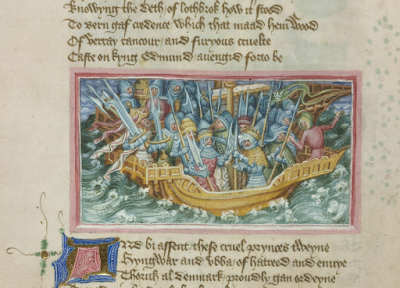 But just as interesting are the scattered references to the fates of Lothbrok's sons, which connect them with particular places in England in some surprising ways. One of my favourites comes from a brief note, written on the blank leaf of a twelfth-century manuscript of Bede's Historia Ecclesiastica - a later writer adding a bit of 'extra history' of which Bede could never have dreamt! The manuscript now belongs to Pembroke College, Cambridge, but it was probably written at Tynemouth Priory, a monastery on the coast of Northumbria which was once a place of great royal connections. Several of the early kings of Northumbria were buried there, and one of the additional notes in the manuscript records information on that subject. 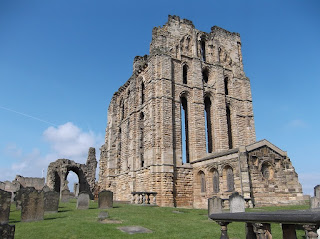 Other notes, however, deal with the sons of Lothbrok, in English and in Latin. In English we get a little bit of verse:

Which means 'Ivar and Ubbe, Beorn was the third, Lothbrok’s sons, hateful to Christ.'

That's all - if there was ever more, it's lost! In Norse legend Lothbrok has at least eight sons, sometimes more, but in English sources, as here, he usually has just two or three: most often Ivar and Ubbe, with or without the addition of Beorn (i.e. the equivalent of Bjorn Ironside). There's some alliterative wordplay in this verse on the name Lothbrok and the Middle English word loþe, which means 'hateful' or 'hostile' (both seem possible translations here). Old Norse sources have an elaborate story about the name Lothbrok which interpret it to mean loðbrók, 'shaggy breeches', and explain that Ragnar got that name because he wore woollen breeches coated with tar to defend himself from venom-breathing serpents. This may, however, be a post-hoc interpretation, and scholars have suggested other possible non-serpent-related etymologies for the name (which is not recorded until the late eleventh century, long after the lifetime of the historical Ragnar and his sons). But to medieval English ears, the loth bit must have seemed very appropriate for a Viking so famously loathsome, and this two-line verse is not the only place where the name is interpreted in that way.

In addition to this verse, the Tynemouth manuscript also offers a note in Latin which gives some information on the supposed fates of Ubbe and Beorn. Some English sources are fairly sympathetic towards the sons of Lothbrok, but not here - they are characterised as very wicked, hostile to Christianity, and richly deserving of the punishments which struck them down. Ubbe, we are told, caused terrible devastation and slew many Christians, and was then punished by being killed by God at a place called 'Ubbelawe' in Yorkshire. Ubbelawe is also mentioned by an earlier source (Gaimar's early twelfth-century Estoire des Engleis) which instead locates it in Devon, and says that Ubbelawe was actually the name of Ubbe's burial-mound - the name means Ubbe's hlæw, an Old English word for a burial-mound which is also preserved in names like Cwichelmeshlæw. Anglo-Saxon sources record that one of the brothers of Ivar was indeed killed in battle in Devon in 878; apparently later sources decided (or knew) that brother was Ubbe, and that Ubbelawe was the site of his burial. There have been attempts to identify Ubbelawe with a landmark near Appledore, on the Devon coast, which has now been lost to the sea, but which in the eighteenth century was known as Ubbaston or Whibblestan.

And meanwhile - the Tynemouth manuscript goes on - Beorn attacked a nunnery on the Isle of Sheppey in Kent, and violated the nuns there. But he too was suddenly struck down by an act of God, swallowed up by the earth – horse and armour and all – as he was riding at Frindsbury, near Rochester. To this day, the note says, there is a deep fissure in the road at Frindsbury, twenty feet wide, where Beorn was engulfed by the earth, and the water at the bottom of it is always tinged red, as if with Viking blood. (Isn't that amazing!) It's not at all clear where this story might have come from, especially since Tynemouth is a long way from Rochester; in the Scandinavian sources, Bjorn Ironside retired from raiding to live happily ever after as a prosperous king of Sweden - but that's not so satisfying a moral...

So, that's what happened to Ubbe and Beorn. What of Ivar? Ivar's name usually appears in medieval English texts as Inguar or Hinguar, and this explains another story not unlike the one of Beorn, though recorded in a different source. This is a late fourteenth or early fifteenth century collection of texts from Hyde Abbey in Winchester, which says that it was Ubbe who was swallowed up by the earth with his horse while he was riding, and Ivar (Hinguar) was drowned while crossing a ford in Berkshire. The place where he died came to be named after him, Hyngarford – modern Hungerford. 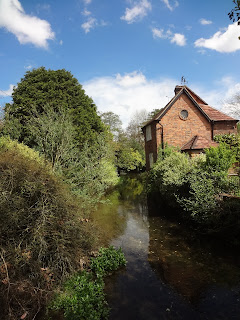 A pretty and peaceful river in Hungerford today...

The name of Hungerford probably, alas, has nothing to do with Ivar; but we might link this supposed etymology to the fact that Hungerford is one of the places known to have celebrated the late-medieval festival of Hocktide, often explained at the time as a commemoration of victory over the Danes. These are both retrospective - and very late - explanations of existing names or customs which account for them by linking them to the Vikings, whom late-medieval writers knew had indeed fought battles in this area of Wessex. Since there were few things medieval writers liked more than speculating about etymology, especially names, it's not surprising that some bright spark spotted a link between Hungerford and Ivar. What's important about these details is not whether they tell us anything about the real Ivar, Ubbe and Beorn - almost certainly not, though you never know! - but what they suggest later medieval writers found interesting about them. Here, it's explaining local names or landscape features by connecting them to famous Vikings, whose names clearly meant something to a contemporary English audience, even without the elaborate legends which were attached to them in Scandinavia.

In recent years, archaeologists have been exploring the possibility that one of the men among the Viking army buried at Repton in Derbyshire may in fact be Ivar the Boneless himself. That's a fascinating idea, and Ivar's death and grave were apparently of as much interest to medieval historians as they are to modern archaeologists, since we have not only this reference to Hungerford but also, more importantly, the Old Norse legend about 'Ivar's howe'. This is the story of Ivar's burial-mound on the coast of Cleveland in Yorkshire, from where the spirit of this fiercest of Vikings posthumously guarded the English coast against invasion. Until, that is, William the Conqueror got wise to this, and went north to burn his bones and break the spell... 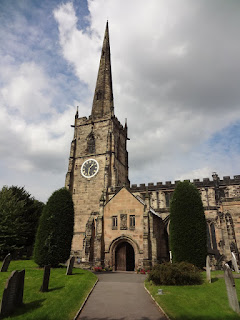 Repton
Posted by Clerk of Oxford at 2:42 pm