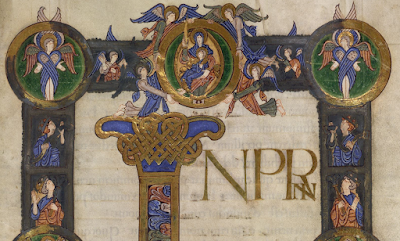 This is the last section of the Anglo-Saxon poem inspired by the Advent O Antiphons. It follows directly on from the section in my last post (comprising lines 416-439 of the poem), and is based on the antiphon 'O admirabile commercium', which has been set to music by a number of composers.

O, that is a wondrous exchange in the life of men!
that mankind's merciful Creator
received from a maiden flesh unmarred,
and she had not known the love of a man,
nor did the Lord of Victory come
by the seed of a human on earth; but that was a more skilful art
than all earth-dwellers could comprehend
in its mystery, how he, glory of the skies,
high lord of the heavens, brought help
to the race of men through his mother's womb.
And coming forth thus, the Saviour of the peoples
deals out his forgiveness every day
to help mankind, Lord of hosts.
And so we, eager for glory, praise him
devotedly in deeds and words. That is high wisdom
in every person who has understanding,
ever to most often and most intently
and most eagerly praise God.
He will grant him the reward of grace,
the holy Saviour himself,
even in that homeland where he never before came,
in the joy of the land of the living,
where he will dwell, blessed, from thenceforth,
live forever without end. Amen. 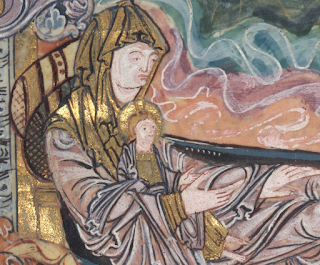 What strikes me about this section of the poem is its ending, which offers something quite different from anything that has come before - in pronouns, if nothing else! (What could be more Christmassy than a bit of poetic grammar?) When human beings appear in Christ I, it's usually in the plural: either as the plural pronouns 'we' and 'us' or as multitudes of humanity, 'speech-bearers' and 'earth-dwellers'. Mary, exalted in her uniqueness, is an important exception; in the whole 439-line poem only Mary and Joseph (and on one occasion an angel) speak in the first person singular. Otherwise this poem is full of groups and collective voices, of human beings and of angels alike. But here, though we don't get a first-person voice, we get a brief closing image of a single person: someone þe gemynd hafað, 'who has gemynd'. I always find gemynd difficult to translate; it refers to the powers of the mind, particularly memory and recollection, but also intellect and wisdom. Any of those (and probably all of them) are possible connotations of gemynd here. I'm sometimes tempted to translate it with the relatively modern word mindfulness: in the sense people use that word today it suggests a collected power of conscious, intentional reflection, and that's rather what this poet is suggesting. This individual with whom the poem closes is anyone who chooses to gather up the powers of their mind, to reflect upon the mysterious 'exchange' of human flesh and holy spirit, and - here at the end of the poem - to hold in memory all that has come before. By doing so this 'he' (who is any of us) comes to an eternal joy which is expressed, oddly but rather beautifully, in a closing muddle of pronouns:

He will grant him the reward of grace,
the holy Saviour himself,

even in that homeland where he never came before,
in the joy of the land of the living,
where he will dwell, blessed, from thenceforth,
live forever without end.

Who is 'he' here? Sometimes clearly Christ, and sometimes the mindful man, but the last, at least, might well be both. Perhaps they become one in that strange place, a final wonder from a poem full of marvels: a land where humans have never yet been, but which is their true home.