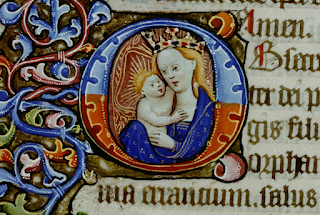 Mary hath borne alone
The Son of God in throne.

That maiden mild her child did keep
As mothers doth echone, [as all mothers do]
But her dear son full sore did weep
For sinful man alone.

She rocked him and sung 'Lullay',
But ever he made great moan.
'Dear son,' she said, 'tell, I thee pray,
Why dost thy weep alone?'

'Mother,' he said, 'I shall be slain,
Who sin did never none,
And suffer death with woeful pain;
Therefore I weep alone.'

'Lullay,' she said, 'sleep and be still,
And let be all thy moan,
For all thing is at thine own will
In heaven and earth alone.'

'Mother,' he said, 'how should I sleep?
How should I leave my moan?
I have more cause to sob and weep,
Since I shall die alone.'

'Dear son,' she said, 'the king of bliss,
That is so high in throne,
Knoweth that thou didst never amiss,
Why shouldest thou die alone?'

'Mother,' he said, 'only of thee
I took both flesh and bone,
To save mankind and make it free
With my heart blood alone.'

'Dear son,' she said, 'thou art equal
To God, that is in throne,
For man therefore, that is so thrall,
Why shouldest thou die alone?'

'Dear son,' she said, 'since thou hast take
Of me both flesh and bone,
If it may be, me not forsake
In care and woe alone.'

'For man I must the ransom pay,
The which to hell is gone,
Mother,' he said, 'on Good Friday,
For he may not alone.' [man cannot do this by himself]

'Dear son,' she said unto him tho [then]
'When thou from me art gone,
Then shall I live in care and woe
Without comfort alone.'

'Mother,' he said, 'take thou no thought,
For me make thou no moan;
When I have bought that I have wrought, [when I have redeemed what I created]
Thou shalt not be alone.'

'On the third day, I thee behight, [promise]
After that I am gone,
I will arise by my great might
And comfort thee alone.' 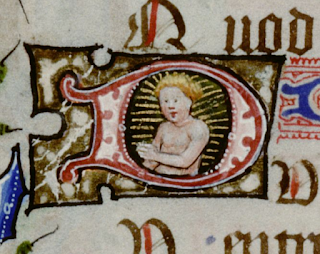 This is a poem from a manuscript of carols which was compiled by the Canterbury friar James Ryman at the end of the fifteenth century. Ryman's manuscript (now CUL MS. Ee 1.12) contains more than 150 carols on a range of topics and in varying moods, from a cheery farewell to Advent fasting to stately songs in praise of the Virgin Mary and sombre songs like this one. In this week's Catholic Herald I've written a short piece about medieval Christmas celebrations, with an emphasis on festivity and fun and all the things people in the Middle Ages did to celebrate the season, and medieval carols give us some lively pictures of that merriment. But amid the jollity there is another strain, which seeks to explore something more serious, sad, and strange. Medieval carols can speak of joy, comfort, liberation - but they can also imagine a tiny baby telling his mother 'I shall die alone.'

At this time of year medieval images of the Nativity are to be found everywhere, and they usually look serene and beautiful - gazing mother, quiet baby, angels adoring. Some medieval Nativity carols are like this too, but others - a surprisingly large number - offer Nativity scenes which are not peaceful but deeply painful and poignant: the baby Jesus shivering in the cold, or crying and screeching, while Mary and Joseph lament their poverty. I wrote about one particularly powerful example in detail here, but I think this one, gentle and dignified and sad, is my favourite example of the theme:

Child, it is a wepyng dale that thou art comen in;
Thy poure cloutes it proven wel, thy bed made in the bynne;
Cold and hunger thou most thoeln, as thou were geten in synne,
And after deyen on the tree for love of all mankynne.
Lullay, lullay, litel child, no wonder thogh thou care,
Thou art comen amonges hem that thy deeth shullen yare.

The central idea in all these poems is that we live in a 'weeping world', a place of many sorrows; this baby faces pain and death in his future because he has come to share that sorrow, to feel the grief that all human beings feel, and to suffer for our sake.

In James Ryman's poem the keyword, repeated again and again, is that poignant alone. The carol plays delicately with the different shades of meaning this word had in Middle English, so it doesn't quite mean the same thing every time it is used here: sometimes it means 'solitary', but it also means 'only', conveying the sense that this child alone, by his death, can save mankind. In response to Mary's confusion about why her child should suffer by his Father's will, alone also emphasises the unity of will between the Father and the Son (they are 'all one'). No wonder poor Mary struggles to understand, and the carol follows several stages of her confusion and her attempts at comfort: if everything in the universe is at her baby's command, she wonders, what can there be to cry about? She knows her child's power, and his nature - that he is God, equal with his Father - but not what that means, or what it will mean for her. His death alone is also his choice alone; her child is God enough to choose his own death, and yet human enough to weep for it.

It's Mary's reaction which makes this poem particularly moving, especially when she begins to comprehend, and asks him not to leave her: 'If it may be, me not forsake / In care and woe alone.' The force of her grief is reminiscent (perhaps deliberately so) of the powerful dialogues between Mary and Christ on the cross, such as 'Stond wel, moder, under rode', where she clings to her son and cannot let him go, though he begs her to let him die. There she learns, her son tells her, a common sorrow: 'What pain they endure who children bear, / What sorrow they have who children lose.' In her grief she gains kinship with all mothers, just as Christ, becoming a crying baby, shares a pain we all have known.

This genre of medieval poem can be painful reading at Christmastime, but it seems more honest and clear-eyed than the sentimentality which often surrounds a modern Christmas; there is no expectation here that everyone is happy and jolly, living the perfect life which really exists only in Christmas adverts and newspaper supplements. In truth many people at Christmas do feel very much alone; this is a season which, precisely because of its expectation of pleasure, draws painful attention to absences in our lives - whether a specific person or place we are missing, or a more general sense of something we wish to have and don't. These poems offer companionship in that sorrow. Their predominant mood is compassion, in its literal sense: Christ has come into this 'weeping world' to suffer with us. This baby grieves for us, and the idea is that we should be moved by these poems to feel compassion for him and for his mother. It's almost impossible not to, just as it's hard to hear a crying baby and not respond to it. These poems seek to provoke a stirring of what Middle English poets called kynd love - the love which is innate to all creatures, a part of our essential nature, which comes ultimately from God and can be trained to lead us back to him. The love between a mother and her baby is the most kynd instinct in the human heart, Julian of Norwich says; and so she explains why God chose to become a child to his mother that he might be a mother to us all:


Our kynd Mother, our gracious Mother, for he would all wholly become our Mother in all things, he took the ground of his work full low and full mildly in the maiden’s womb... Our high God, the sovereign wisdom of all, in this low place he arrayed him and dyte him [prepared himself] full ready in our poor flesh, himself to do the service and the office of motherhood in all things. The mother’s service is nearest, readiest, and surest. Nearest for it is most of kynd, readiest for it is most of love, and surest for it is most of truth. This office might not nor could never be done to the full but by him alone. We know that all our mothers bear us to pain and to dying. And what is that but our very Mother Jesus? He, all love, beareth us to joy and to endless living...

This fair, lovely word mother, it is so sweet and so kynd of itself that it may not verily be said of none nor to none but of him and to him who is very Mother of life and of all... And in this I saw that all our debts that we owe, by God’s bidding, to fatherhood and motherhood is fulfilled in true loving of God, which blessed love Christ worketh in us; and this was shewed in all, and namely in the high plenteous words where he sayeth, I it am that thou lovest. 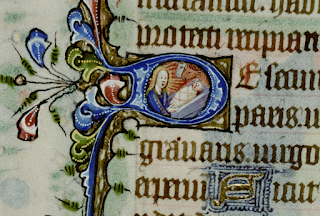