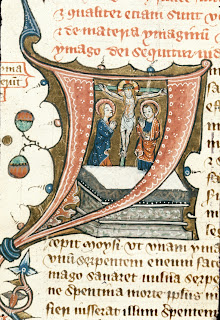 "Moder, if y dar thee tellen,
Yif y ne deye, thu gost to helle;
Hi thole this ded for thine sake."
"Sune, thu best me so minde.
With me nout; it is mi kinde
That y for thee sorye make."

"Moder, merci, let me deyen,
For Adam ut of helle beyn
And al mankin that is forloren."
"Sune, wat sal me to rede?
Thi pine pined me to dede;
Let me deyn thee biforen."

"Moder, reu of moder kare,
Nu thu wost of moder fare,
Thou thu be clene mayden man."
"Sune, help alle at nede,
Alle tho that to me greden —
Mayden, wyf, and fol wyman."

Blisced be thu, quen of hevene,
Bring us ut of helle levene
Thurth thi dere sunes mith.
Moder, for that hithe blode
That he sadde upon the rode
Led us into hevene lith. Amen.

This thirteenth-century poem imagines a dialogue between Mary and Christ as he hangs upon the cross. Meditation on the sorrows of Mary at the foot of the cross, as a way of imaginatively entering into the experience of the Crucifixion, was an increasingly popular devotional theme in this period; you can read other Middle English lyrics on the same subject here, and the most famous example today is probably the 'Stabat Mater Dolorosa', a thirteenth-century Latin hymn written in Italy. The English 'Stond wel, moder', by approaching the scene through dialogue (and only dialogue, until the last two verses), creates a particularly effective impression of immediacy and drama. The interaction between their speeches is vivid and believable: they talk past each other, Christ trying to comfort her and explain the necessity of his death, while his mother is unable to look beyond his immediate suffering. The opening lines ask of her an impossible, paradoxical emotional response: to rejoice as she sees her son dying. Her anguished incredulity - 'how can I be joyful?' - is the reader's entry into this mystery, to see the loving purpose behind this terrible grief.

One of the manuscripts of the poem includes music too, and here it is being sung:

The poem survives in several manuscripts (there's a list here). My translation, preserving some of the beautiful rhymes:

"Stand well, Mother, under the rood,
Behold your child with a glad mood, [mind]
Joyful, Mother, you may be."
"Son, how may I joyful stand?
I see your feet, I see your hands
Nailed to the hard tree."

"Mother, cease your weeping:
I suffer this death for mankind's thing; [sake]
For my guilt I suffer none."
"Son, I feel your death wound;
The sword is at my heart's ground,
As promised to me Simeon."

"Mother, have pity on your bairn, [child]
And wash away those bloody teren, [tears]
They hurt me worse than my death!"
"Son, how may I these tears shun?
I see those bloody floods run
Out of your heart to my feet."

"Mother, now I may you say:
Better that I alone should die
Than all mankind should go to hell."
"Son, I see your body swung,
Your breast, your hand, your foot through-stung; [pierced]
No wonder that I mourn!"

"Mother, if I dare you tell,
If I die not, you will go to hell;
I suffer this death for your sake."
"Son, you are so meek and kind;
Blame me not, it is my kind [nature]
That I for you this sorrow make."

"Mother, have mercy! let me die,
Adam out of hell to buy
And all mankind that is forlorn!"
"Son, what would you have me do?
Your pain pains me to death;
Let me die before you."

"Mother, now you may well learn
What pain they endure who children bear,
What sorrow they have who children lose."
"Son, indeed, I can you tell,
No sorrow but the pain of hell
Is greater than to suffer so!"

"Mother, pity a mother's care,
Now you know how mothers fare,
Though you are a pure virgin."
"Son, help all at need,
All those that to me greede, [cry]
Maiden, wife, and unchaste woman."

"Mother, I may no longer dwell;
The time is come, I go to hell,
The third day I will rise upon."
"Son, I will with you go;
I die, indeed, of your wounds;
Such pitiful death was never none."

When he rose then fell her sorrow:
The bliss sprang up the third morrow.
Joyful, Mother, were you then!
Mother, for that very bliss
Beseech your son, our sins release,
You are our shield against the foe.

Blessed be you, full of bliss,
Let us never heaven miss
Through your dear son's might.
Mother, for that selfsame blood
That he shed upon the rood
Lead us into heaven's light. Amen.

It's interesting to contrast this poem with those which dramatise a conversation between the infant Christ and his mother (this one, for instance), and to see that the specific focus on women here ('Moder, reu of moder kare,/Nu thu wost of moder fare' and Mary's appeal for 'mayden, wyf, and fol wyman') is also echoed by a number of contemporary devotional poems. The most memorable is the brutal 'O all women that ever were born', where Mary compares herself, as she cradles her dead son and traces the wounds on his body, to happy mothers who lovingly dance their children on their laps. It's almost impossibly painful to read, a poignant reminder, in the words of this poem, 'what sorrow they have that children bear". There was a medieval tradition that it was at the Crucifixion that Mary, who suffered no pain in her pregnancy and childbirth, came at last to feel the anguish of motherhood, and so to sympathise with and support all human mothers. 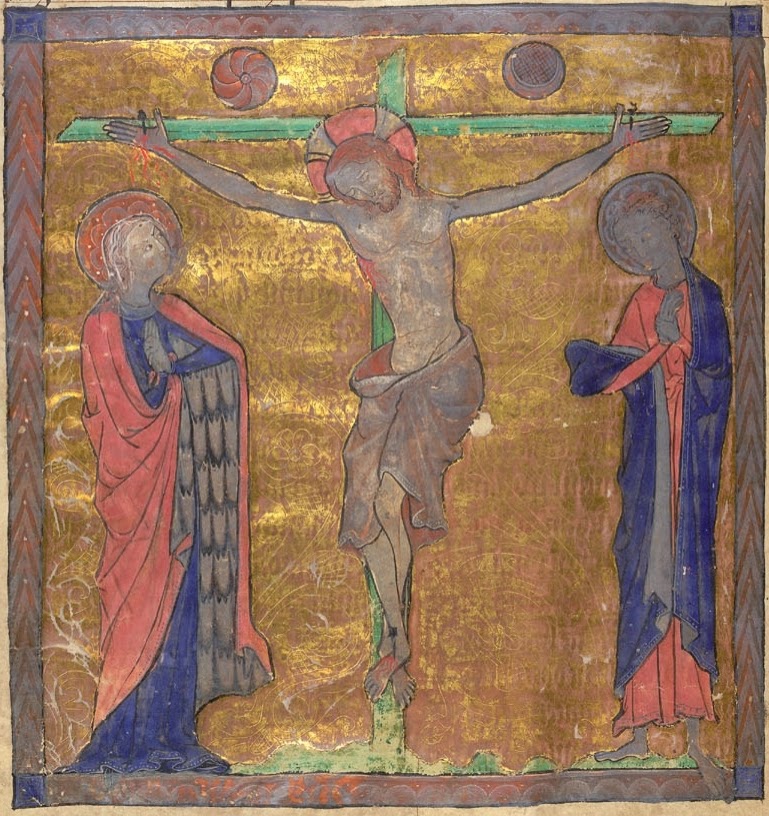 Some of my favourite Middle English poems on the subject of the Passion can be found under this tag. A few more images of Mary at the foot of the cross, from the Anglo-Saxon period to the fourteenth century: 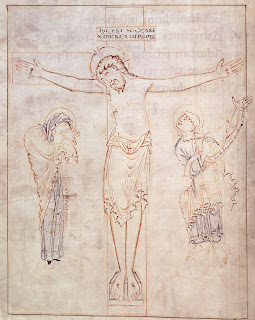 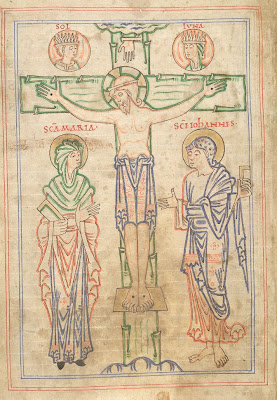 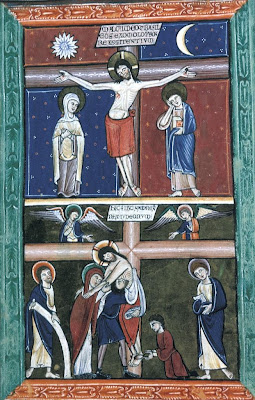 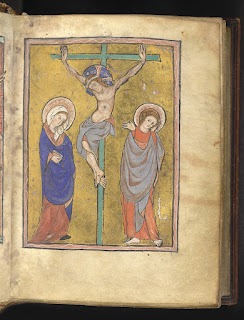 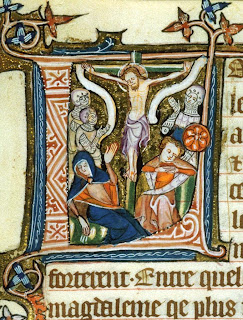 Email ThisBlogThis!Share to TwitterShare to FacebookShare to Pinterest
Labels: Medieval, Poetry, The Passion

Thanks for this. The Hilliard Ensemble does a good job of this one too -

I'll have a look at that - thanks for the link!

Thank you so much for this post. I had a recording of this over 40 years ago (now lost) and have just bought the Hilliard ensemble's rendition, but accompanying notes do not include the words. Now I have both again.

I'm glad the post was helpful - I was actually just listening to this again today, and it's so beautiful.