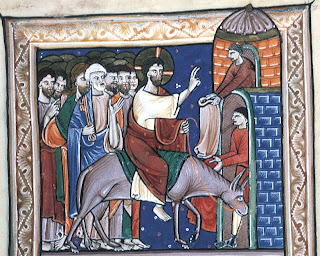 Thou art king of Israel and of Davides kunne,
Blessed king that comest till ous withoute wem of sunne.

All that is in hevene thee herieth under on,
And all thine owne hondewerk and euch dedlich mon.

The folk of Giwes with bowes comen ayeinest thee,
And we with bedes and with song meketh ous to thee.

He kepten thee with worshiping, ayeinst thou shuldest deye,
And we singen to thy worshipe, in trone that sittest heye.

Here wil and here mekinge thou nome tho to thonk;
Queme thee thenne, milsful King, oure offrings of this song.

This is a translation of the Palm Sunday hymn 'Gloria, laus et honor' by the Franciscan friar William Herebert (c.1270-1333). Here's a modernised version:

Glory, praise and honour be to Christ who dear us bought,
To whom cried 'Hosanna' children pure of thought.

You are the king of Israel and of David's kin,
Blessed King who comes to us without the stain of sin.

All that is in heaven praises you as one,
And all your own handiwork and every mortal man.

The Jewish people with boughs came to meet you,
And we with prayers and with songs humble ourselves to you.

They attended you with honour, at the time when you should die,
And we sing to your honour, who in throne sits on high.

Their will and their humility you accepted graciously then;
So may please you, merciful King, our offering of this song.

As always, Herebert produces a creative translation, a fluid and confident reworking of the Latin hymn into an English idiom. The first verse plays effectively on the similarity between the English words king and kin, and the two lines of each verse are neatly linked to each other by alliteration as well as by rhyme: king/kunne/comest, hevene/herieth/hondewerk, bowes/bedes, etc. Since several of the verses are carefully structured as parallels - the first line describes what the people of Jerusalem did, the second what 'we' do on Palm Sunday - linking them through alliteration works to re-enforce the parallels between, for instance, their bowes and our bedes.

R: All glory, laud and honor,
To Thee, Redeemer, King,
To whom the lips of children
Made sweet hosannas ring.

1. Thou art the King of Israel,
Thou David’s royal Son,
Who in the Lord’s Name comest,
The King and blessèd one.

2. The company of angels
Are praising Thee on High,
And mortal men and all things
Created make reply.

3. The people of the Hebrews
With palms before Thee went;
Our prayer and praise and anthems
Before Thee we present.

4. To Thee, before Thy passion,
They sang their hymns of praise;
To Thee, now high exalted,
Our melody we raise.

5. Thou didst accept their praises;
Accept the prayers we bring,
Who in all good delightest,
Thou good and gracious King. 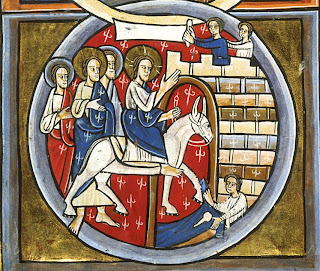 From one Middle English Palm Sunday to another. In the following extract from the fourteenth-century poem Piers Plowman, as this long and intricate poem moves towards its closing stages, the dreamer finds himself suddenly confronted with a vision of the events of Palm Sunday. He sees Christ riding towards Jerusalem like a knight riding to a tournament, fighting - as knights of medieval romance sometimes do - in the arms of someone else: the armour of Piers the Plowman, the humble representative of mankind.

Wolleward and wet-shod went I forth after
As a reckless renk that recketh of no woe,
And yede forth like a lorel all my life time,
Til I wax weary of the world and wilned eft to sleep,
And lened me to a Lenten - and long time I slept;
Rest me there and rutte fast til ramis palmarum.
Of gerlis and of Gloria, laus greatly me dreamed
And how osanna by organye old folk songen,
And of Christ's passion and penance, the people that ofraughte.
One semblable to the Samaritan, and somdeel to Piers the Plowman,
Barefoot on an ass's back bootles came prikye,
Withouten spores other spear; spakliche he looked,
As is the kynde of a knight that cometh to be dubbed,
To geten him gilt spurs on galoches ycouped.
Then was Faith in a fenestre, and cried "A Fili David!'
As doth an herald of arms when aventrous cometh to jousts.
Old Jews of Jerusalem for joy they sungen,
Benedictus qui venit in nomine Domini.

Then I frayned at Faith what all that fare bymente,
And who should joust in Jerusalem. "Jesus,' he said,
"And fetch that the fiend claimeth - Piers fruit the Plowman.'
"Is Piers in this place?' quod I, and he preynte on me.
"This Jesus of his gentries will joust in Piers' arms,
In his helm and in his haubergeon - humana natura.
That Christ be not biknowe here for consummatus Deus,
In Piers paltok the Plowman this prikiere shall ride;
For no dynt shall him dere as in deitate Patris.'
"Who shall joust with Jesus?' quod I, "Jews or scribes?'
"Nay,' quod Faith, "but the fiend, and false doom to die.
Death seith he shall fordo and adoun bring
All that liveth or looketh in land or in water.
Life saith that he lieth, and layeth his life to wedde
That, for all that Death can do, within three days to walk
And fetch from the fend Piers fruit the Plowman,
And lay it where him liketh, and Lucifer bind,
And forbite and adown bring bale death for ever:
O Mors ero mors tua!'

[Shirtless and shoeless I went forth afterwards, like a careless fool who expects no sorrow, and went about like a wastrel all the days of my life, until I grew weary of the world and wanted to sleep again. And I idled until Lent, and a long time I slept, and rested there and snored fast until Palm Sunday. Of children and of Gloria, laus greatly I dreamed, and how the old people sang 'Hosanna' with the organ, and of Christ's passion and penance for the redemption of the people. One resembling the Samaritan, and somewhat like Piers the Plowman, barefoot on an ass's back bootless came riding, without spurs or spear; eager he looked, like a knight who comes to be dubbed, to get golden spurs to wear on his shoes. Then Faith was at a window, and cried A Fili David!, as a herald of arms does when knights come to joust. The old Jews of Jerusalem sang for joy: Benedictus qui venit in nomine Domini.

Then I asked Faith what all these things meant, and who was going to joust in Jerusalem. "Jesus," he said, "to seize what the fiend claims - the fruit of Piers the Plowman." "Is Piers in this place?" I asked, and he winked at me. "This Jesus, in his nobility, will joust in Piers' armour, in his helmet and his mail coat, which is human nature. So that Christ may not be recognised here as fully God, this knight shall ride in the clothes of Piers the Plowman; for no blow shall harm him in his divine nature with the Father." "Who shall joust with Jesus,' I said, "the Jews or the scribes?" "Neither," said Faith, "but the fiend, and a false condemnation to death. Death says he shall destroy and bring down all who live or look on land or water. Life says that he lies, and lays his life as a pledge that, for all Death can do, within three days he shall walk again, and seize back from the fiend the fruit of Piers the Plowman. He will place it where it pleases him, and bind Lucifer, and destroy and bring down death for ever: O death, I will be thy death!"] 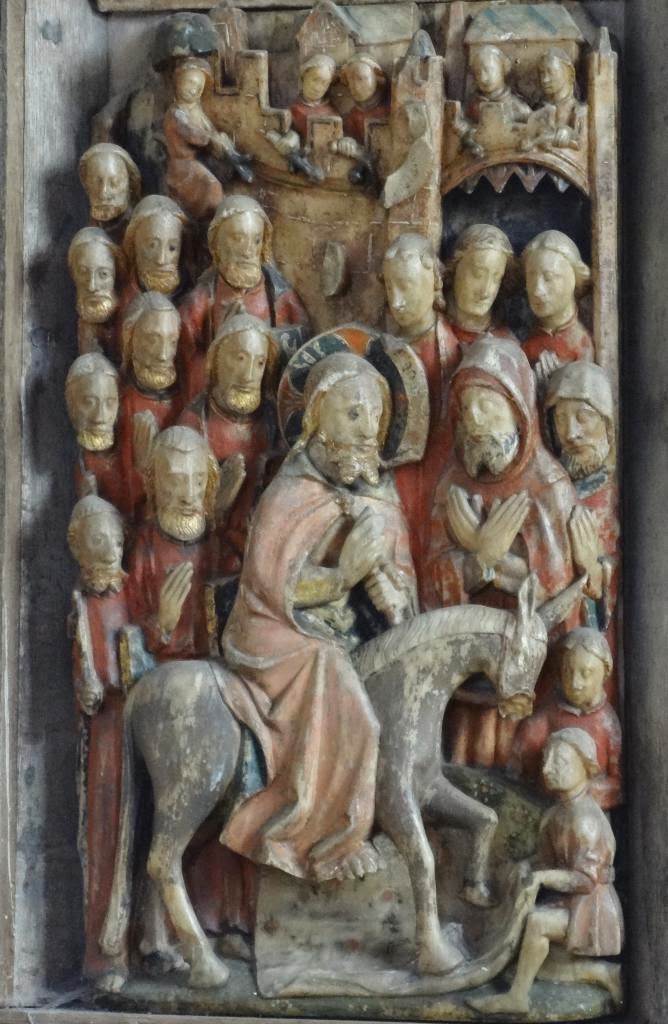 The entry into Jerusalem in medieval alabaster, from Haddon Hall, Derbyshire
Posted by Clerk of Oxford at 8:52 am