St Anselm of Canterbury, one of the greatest medieval theologians, is commemorated today, on the anniversary of his death in 1109. I don't have much to say about him today, but I want to give him credit for being one of the first people (perhaps the first person) after the Norman Conquest to give due honour to St Ælfheah, about whom I wrote the other day. Lanfranc, the first post-Conquest Archbishop of Canterbury, respected his predecessor Ælfheah as a good man and archbishop, but was not convinced he was actually a saint. In fact, Lanfranc wasn't entirely convinced of the sanctity of any the barbarically-named priests and princes whom the Anglo-Saxons had venerated as saints. It probably wasn't anti-English prejudice, though it has been interpreted that way; Lanfranc approached the question like the scholar he was - he wanted proof, or at least a reasonable argument. He stripped Canterbury's calendar of all its pre-Conquest saints, but consulted Anselm (then on his first visit to Canterbury in 1079) about the question of whether Ælfheah was really a martyr, since it was not clear whether he had strictly died in defence of the Christian faith.

You might think that dying by having ox-bones thrown at you by pagan Vikings would be a good qualification - but not in Lanfranc's eyes! The issue was that Ælfheah had been killed for refusing to pay a ransom to his captors, and not necessarily because he was a Christian. So Anselm reasoned that Ælfheah had died because he refused to use other people's money to buy his own freedom - which would be a sin against justice. To refuse to sin against justice was to refuse to sin against God, he said, and so Ælfheah was a martyr for truth, just as John the Baptist was, and therefore a martyr for God. "There is the witness of Holy Scripture, as you, Father, very well know," Anselm said to Lanfranc, "that Christ is both truth and justice; so he who dies for truth and justice dies for Christ. But he who dies for Christ is, as the Church holds, a martyr. Now St Alphege as truly suffered for justice as St John did for truth. So why should anyone have more doubt about the true and holy martyrdom of the one than of the other?" This argument convinced Lanfranc and delighted the Canterbury monks, and occasioned the writing of a wonderful Life of Alphege.

When Anselm later succeeded Lanfranc as Archbishop of Canterbury, he supposedly consulted Bishop Wulfstan of Worcester, "sole survivor of the old Fathers of the English people", to ask him about the customs of the English church which had been so violently eradicated. This story (plus the one about Henry I and Matilda) contributes substantially to making Anselm one of my favourite medieval people. Good man! 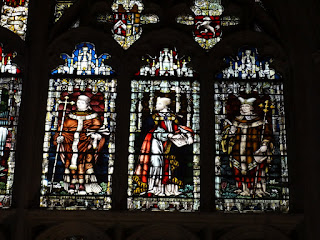 Alphege, Lanfranc and Anselm (l-r) together in stained glass in the Chapter House of Canterbury Cathedral
Posted by Clerk of Oxford at 8:31 am