I went to Canterbury last week, and slipped into the cathedral in search of quiet - and also of medieval people. Canterbury has some of the finest medieval glass in the country (probably in the world) and so it seems a little perverse to come away only talking about the modern examples; but perhaps it can be forgiven in a reception theory kind of way? I promise that I did pay due tribute to the real medieval stuff, and take photos of that too, but I'll only deal with the modern here. If you would like to know more about the medieval glass of Canterbury, and the admirable work being done to conserve it, go here and here.

Anyway. I had just written last week's post about Anselm when I visited the cathedral, and so I went to the chapel dedicated to him, which looks like this: 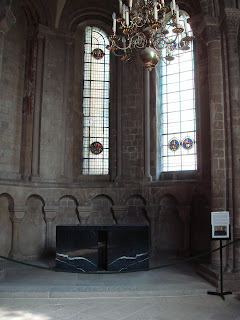 The altar was only installed in 2006. The chapel, which suffered bomb damage in World War II, has a modern window in commemoration of Anselm, which was very bright on that sunny day, and also very red. 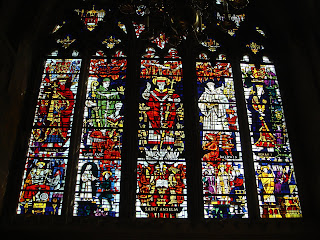 Very red. This window dates from 1959, as I think you can rather tell. 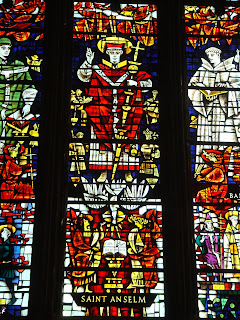 Anselm is flanked by his predecessor Lanfranc (in green) and successor Baldwin (in white), and either side of them are two kings, Henry I (as at Norwich, though depicted as much older here!) and William Rufus. 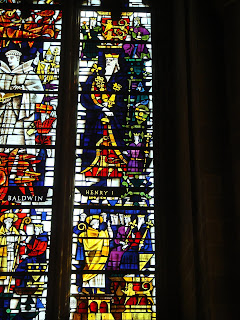 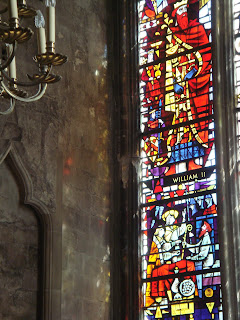 He and Anselm did not get on at all - but this is reconciliation in glass.

In the chapter house, off the cloisters, there are two windows depicting figures from the history of Canterbury down to the days of Queen Victoria. Here are King Ethelbert of Kent and Queen Bertha, with Augustine: 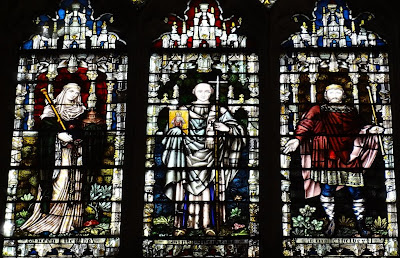 Bertha's drapery is rather pretty; Ethelbert has the cross-gartered legs always attributed to Anglo-Saxons by nineteenth-century artists! 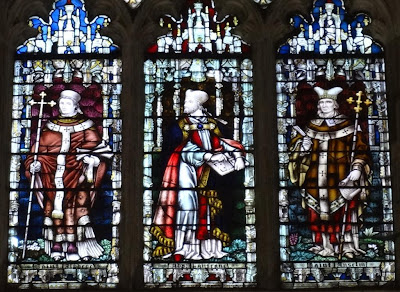 Here are the three archbishops who concerned me last week: Alphege, rather gruesomely holding the bones with which he was pelted by his captors; Lanfranc, planning the building of the new cathedral; and Anselm, looking oddly like a well-fed Protestant divine of the seventeenth century. 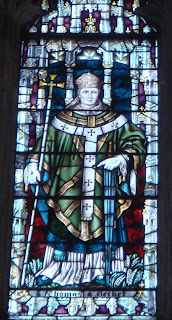 Thomas Becket, even more stout than Anselm, and with a fearsome-looking sword.

I puzzled for a good while about the next few scenes (these are from another window in the chapter house). This is Augustine and the baptism of Ethelbert: 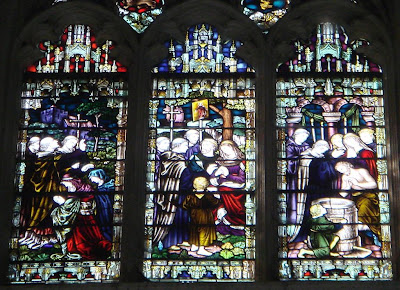 I think the man being martyred in the picture below must be Alphege, since the weapons look like bones. But if so the Danes don't look much like your usual depiction of Vikings; for one thing, they're wearing striking jewel-bright clothes: 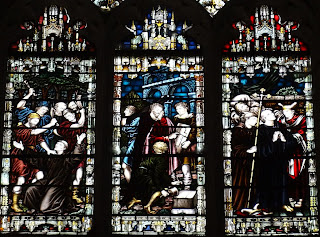 Next, I assume Becket's murder is on the far left here, followed by the king doing penance for his death, and the translation of his body: 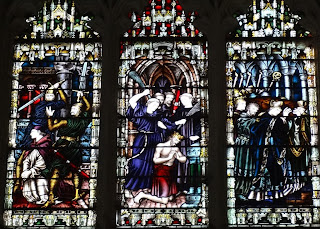 But what's going on in this one? Perhaps the far right depicts the death of Simon Sudbury, yet another Archbishop of Canterbury who met a violent end, this time at the hands of the Peasants' Revolt. That's just a guess, though. 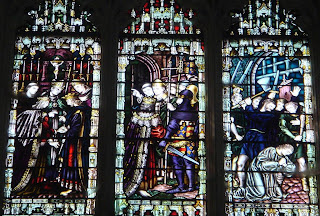 I don't recognise the marriage or the middle scene.

But finally, on the outside of the cathedral, among the statues, Anselm again: 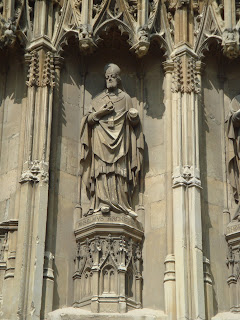 And in place of honour, flanking the door through which the tourists were streaming, Ethelbert and Bertha: 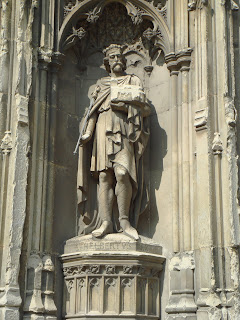 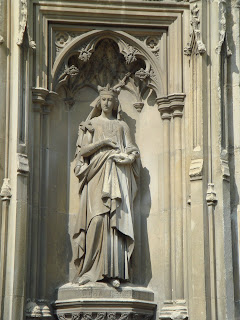 Matronly and fair.
Posted by Clerk of Oxford at 10:09 am