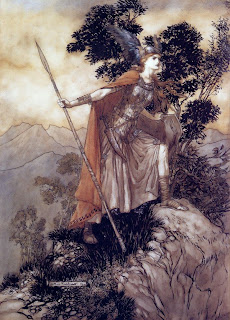 I'm a massive fan of the Victorian novelist Charlotte Yonge, and have been beguiling my Easter holiday with her monumental 1873 novel The Pillars of the House - so very long, but so very lovable! She's hugely under-rated, hardly read today (though once immensely popular) and academics seem only interested in her as far as they can talk about gender stereotyping and religious extremism. I'm only an amateur Victorianist, but in my opinion she's a truly great novelist of a particular stamp: she has her limitations, but she has an extremely subtle and sensitive understanding of character and social relationships, which are worked out in her novels with a complexity surpassing many of her contemporaries. If Jane Austen had been born a Victorian, and thus had a taste which leaned more towards hugely long novels about redemptive suffering than to elegant eighteenth-century pen-portraits, she would have been like Charlotte Yonge.

Anyway, one of Yonge's most endearing features is her enthusiastic interest in history (she wrote a large number of historical novels, though personally I prefer her contemporary fiction) and to me one of the sideline pleasures of her work is a useful insight into a certain kind of Victorian medievalism. She wrote an intelligent novel, aimed at young children, about the Dukes of Normandy; her modern characters read the Old English Boethius attributed to Alfred the Great. She compares the experience of one hero to a famous episode in the conversion of Iceland, and her understanding of Christian knighthood as a pattern for modern life is a theme which runs through all her work. And then there's this, which I read this morning, and find very striking. It's from a sermon given by one of the main characters in The Pillars of the House after he, and several of his brothers, have been involved in a fatal boating accident. One of his brothers has been killed, and the clerical brother, preaching at the funeral, speaks thus:

'"One shall be taken and another left. They say unto Him, Where, Lord?" Yes. Strange, startling, arbitrary, as seem often the calls to the soldiers in Christ's army, each is at its true time, for the choice is made in Love...
[The vicar describes] the picture of the serried ranks, standing fast in one army, warring as one band against darkness, foulness, cruelty, and all other evils, each fighting his own battle in private, yet even thus striking as much for the cause as for himself. So they stood, soldiers in a campaign, aware that any moment might snatch them out of the ranks, yet also aware that not one would be taken save at the right moment when his warfare had come to the crisis. Our forefathers of old believed in glorious maidens who floated over the battle-field as choosers of the slain, and bore hero-spirits away to the Home of Triumph in chariots of light, to dwell among the brave. Like them we believe in the Triumphant Home, where dwell the brave who have stood steadfast in faith, joyful through hope, rooted in charity, bright in purity, dashing down the arrows of temptation that glint against their armour. Like them, we believe in a Chooser of the slain, bearing us, one by one, from our several posts, with longer or shorter warning, exactly when our warfare is accomplished, our individual battle is, or ought to be, won.'


'chooser of the slain' is a literal translation of the Old Norse valkyrja and its Old English cognate, wælcyrie, the female spirits who appeared above the field of battle and claimed the greatest warriors for death and for Odin. The discussion of the Christian life as a battle - particularly a private battle against one's own personal temptations - is very characteristic of Yonge; it finds its fullest expression in her most famous novel, The Heir of Redclyffe. This picture of God-as-valkyrie is, however, an unusual and rather elegant bit of syncretism.


Image: Arthur Rackham's vision of Brynhildr, the most famous valkyrie of them all.
Posted by Clerk of Oxford at 4:16 pm