More modern memorials to medieval saints. These are from two churches I already mentioned in connection with St Edmund of East Anglia. First, a fragment preserved in the porch of Southwold church - an elderly but particularly regal Edward the Confessor: 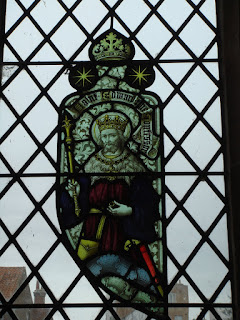 There's something odd about the face, quite apart from the many wrinkles (!) but I like his sceptre and the chain around his neck, presumably both a bit of artistic license. The colours are pleasingly rich, too.

And at lovely little Fritton, in the tiny Anglo-Saxon chancel, the fantastic medieval wall painting is complemented by four windows of medieval saints. The quality is a bit hit-and-miss but the choice of saints is distinctive and unusual. This was my least favourite: 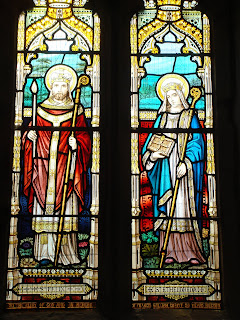 There's something off about the expression on the face of Etheldreda (Æthelthryth, the seventh-century Abbess of Ely) - it's almost supercilious. I do like the representation of what is presumably Ely behind her, though. I have mixed feelings about Æthelthryth because although Bede's account of her is very edifying, the story of her death from a tumour in her neck (which she considered a punishment for wearing necklaces in her vain youth) creeps me out every time I put on a necklace. Yuck. Sorry, Æthelthryth.

Her sister in the next window is a bit more interesting, and a more unusual subject. St Wihtburh, like Æthelthryth, was the daughter of King Anna of East Anglia, and the founder of a nunnery - in her case at Dereham in Norfolk. The deer represent the story that when she was building the monastery and had nothing to feed her workmen with, she prayed to the Virgin Mary and was provided with two wild does who fed the men with their milk. Although you might like to compare the story of another Anglo-Saxon princess-nun (in this case Kentish), Domneva, who also had the aid of deer in the founding of her nunnery, and is also often depicted with them. Suspicious. 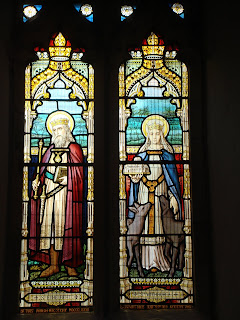 Speaking of Minster-in-Thanet (which is where Domneva's nunnery was founded), I assume that's St Ethelbert of Kent next to Wihtburh; these are my favourite depictions of him.

The other two windows depict even more unusual subjects. St Fursey, on the right here, is not so unusual in East Anglia: 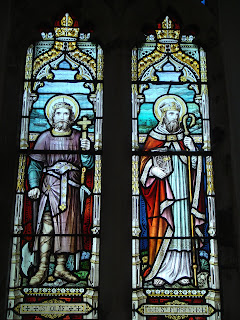 But not even the guidebook could explain correctly who St Olaf was (they thought he lived in Suffolk. Sorry, no...). He is Olaf Haraldsson, king of Norway, aka St Tooley - sometime Viking, then a convert to Christianity who helped Ethelred the Unready defend England against the Vikings (unsuccessfully, of course). Note the Viking ship behind his head, and the multitude of weapons (I count sword and axe - and is that a hammer in his hand?). After he was killed in battle by his own people in 1030, he was venerated as a saint in England as well as in Norway, and there are a number of churches dedicated to him in England. He's an appropriate subject for commemoration at Fritton, for this part of coastal East Anglia looks like it might have been a little hub of his cult - there's a thirteenth-century priory dedicated to him just down the road, and connections with nearby Herringfleet and Gorleston.

The last pair are St Walstan - a very local saint! - and William of Norwich, about whom the less said the better, really. I'd never heard of Walstan, but his legend is an interesting one - especially if he really did die in 1016. He was a farm labourer, and may therefore, I think, be the only saint of Anglo-Saxon England to be neither royal nor a bishop/monk/nun/hermit. His farming implements are nicely done: 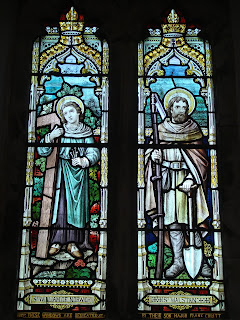