A Virtual Visit to Wye 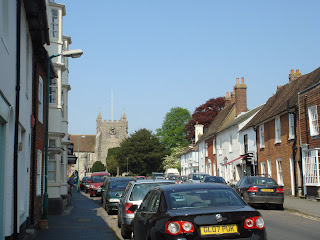 Wye is a pretty village on the road between Ashford and Canterbury, a pleasant and prosperous area where Kent is at its most Garden-of-England-ish. I visited last week on Maundy Thursday, when everything was blossom and sunlight. 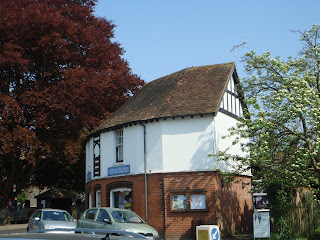 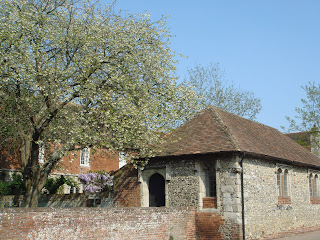 For once the church was not the primary purpose of my visit, but I went there anyway. It had plenty of blossom too: 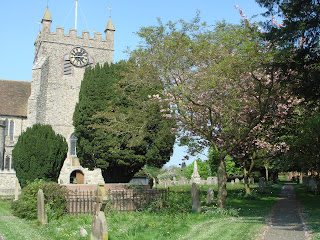 Inside, it's a church of two parts: a spacious, light-filled medieval nave, and a dark panelled chancel (a tower collapsed in the seventeenth century, and this section of the church had to be rebuilt). 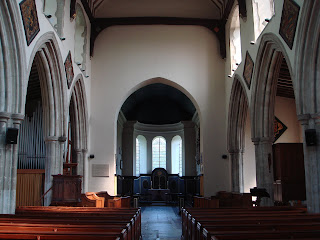 The darkness of this photo is entirely true to life: 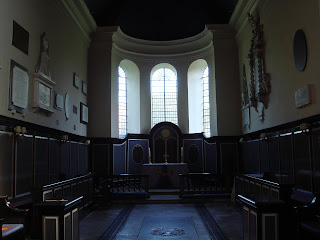 You can see that above the panelling are numerous memorials, of different periods, some very interesting. All church monuments are interesting - but some touch the heart more than others. Here, for instance, is a memorial to female friendship: 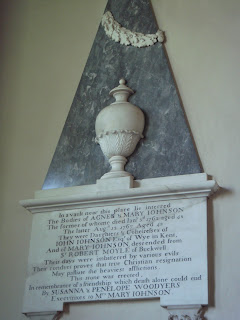 In a vault near this place lie interred
The Bodies of Agnes & Mary Johnson
The former of whome died January 3rd 1763 aged 48
The latter August 12 1767 Aged 48
They were Daughters & Coheiresses of
John Johnson Esq of Wye in Kent
And of Mary Johnson, descended from
Sir Robert Moyle of Buckwell.
Their days were imbittered by various evils
Their conduct proves that true Christian resignation
May palliate the heaviest afflictions.
This stone was erected
In remembrance of a friendship which death alone could end
By Susanna and Penelope Woodyers
Executrixes to Mrs Mary Johnson 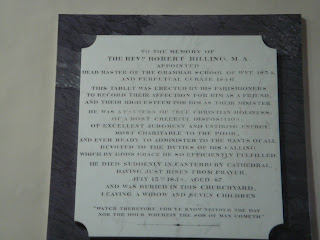 All memorials to clergymen make me think of Charlotte Yonge, and this one to the Rev. Robert Billing would have touched a chord with her. "He died suddenly in Canterbury Cathedral, having just risen from prayer." "Watch therefore, for ye know neither the day nor the hour wherein the Son of Man cometh." 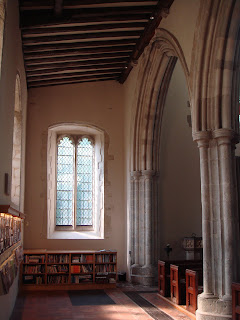 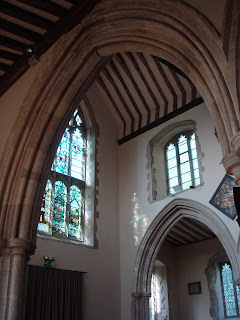 The west window only dates from 1951, and it's imposing yet gracious. It depicts Christ in Majesty, with the church's patrons, St Gregory the Great (holding a book of Gregorian chant) and St Martin of Tours. Above that are instruments of the Passion and a variety of cherub heads: 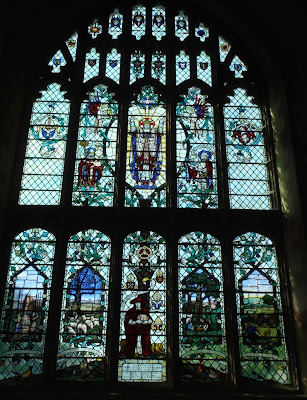 The lower panels are dedicated to one of Wye's most successful native sons, John Kempe, Archbishop of Canterbury. In 1447 he founded a college next to the church, which closed, sadly, just two years ago. If you walk past the beautiful building which used to be the college, you can catch a glimpse of the quad (doubtless such an Oxbridge-like college was a home from home for Kempe, a Merton College man; oh, these modern pretenders!). 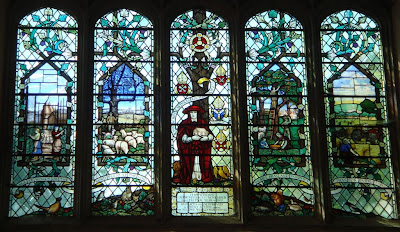 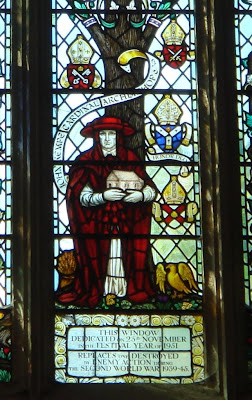 At different times he was bishop or archbishop of Rochester, Chichester, London, York and Canterbury, and a Cardinal, and Lord Chancellor of England.  This seems like more titles than one man could need, but there you are.  The wheat-sheaf behind him alludes to his family arms; the blue crest is that of Canterbury and the one below of Rochester.  My heraldry fails me with the others.

Delightfully, the artist has surrounded Kempe with some typical scenes of Kentish rural life. On one side, hop-picking, some oasthouses, and sheep: 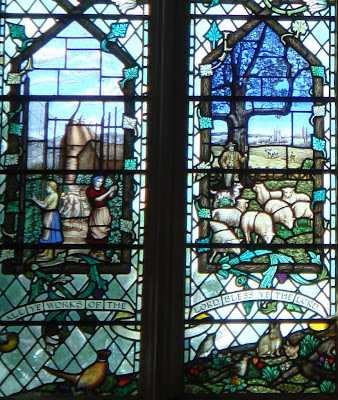 And on the other, an orchard (with a view of Wye itself in the distance) - the Garden of England, remember! - and farming. I wonder if this is the only church window in the country which depicts a tractor. The crown on the hillside is a local landmark, a chalk design carved in 1902 by students of Wye College to commemorate the coronation of Edward VII: 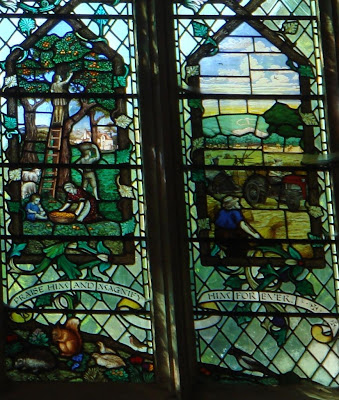 The entwining botanical surround and the pheasant, squirrel, rabbit and other birds are just lovely.

And back out into the churchyard, where Charlotte Yonge again came to mind when I saw this blossom-bedecked tombstone: 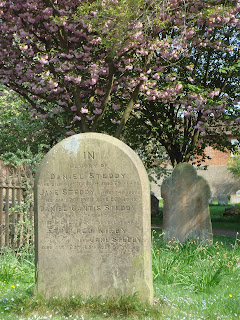 Ethelred is the name of the heroine of The Daisy Chain, and it always struck me as an odd choice for a woman's name, because I associate it with the various Anglo-Saxon kings named Æthelred; I don't think it was an Anglo-Saxon female name. However, clearly Yonge didn't make it up, since Ethelred Kirby, 'sister of the above', was born a good half century before The Daisy Chain. Not sure what happened there.
Posted by Clerk of Oxford at 6:28 pm