... or England, or history, or really anything that's good and true, go and listen to this awesome setting of Kipling's poem 'Puck's Song', from Puck of Pook's Hill. It's just so wonderful, there are no words to describe it. Just go and listen.

See you the ferny ride that steals
Into the oak-woods far?
O that was whence they hewed the keels
That rolled to Trafalgar.

And mark you where the ivy clings
To Bayham's mouldering walls?
O there we cast the stout railings
That stand around St. Paul's.

See you the dimpled track that runs
All hollow through the wheat?
O that was where they hauled the guns
That smote King Philip's fleet.

Out of the Weald, the secret Weald,
Men sent in ancient years,
The horse-shoes red at Flodden Field,
The arrows at Poitiers.

See you our little mill that clacks,
So busy by the brook?
She has ground her corn and paid her tax
Ever since Domesday Book.

See you our stilly woods of oak?
And the dread ditch beside?
O that was where the Saxons broke
On the day that Harold died.

See you the windy levels spread
About the gates of Rye?
O that was where the Northmen fled,
When Alfred's ships came by.

See you our pastures wide and lone,
Where the red oxen browse?
O there was a City thronged and known.
Ere London boasted a house.

And see you, after rain, the trace
Of mound and ditch and wall?
O that was a Legion's camping-place,
When Caesar sailed from Gaul.

And see you marks that show and fade,
Like shadows on the Downs?
O they are the lines the Flint Men made,
To guard their wondrous towns.

Trackway and Camp and City lost,
Salt Marsh where now is corn;
Old Wars, old Peace, old Arts that cease,
And so was England born!

She is not any common Earth,
Water or wood or air,
But Merlin's Isle of Gramarye,
Where you and I will fare. 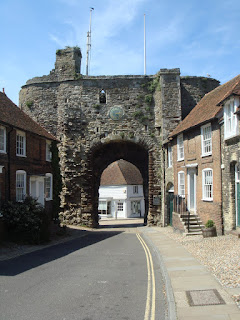