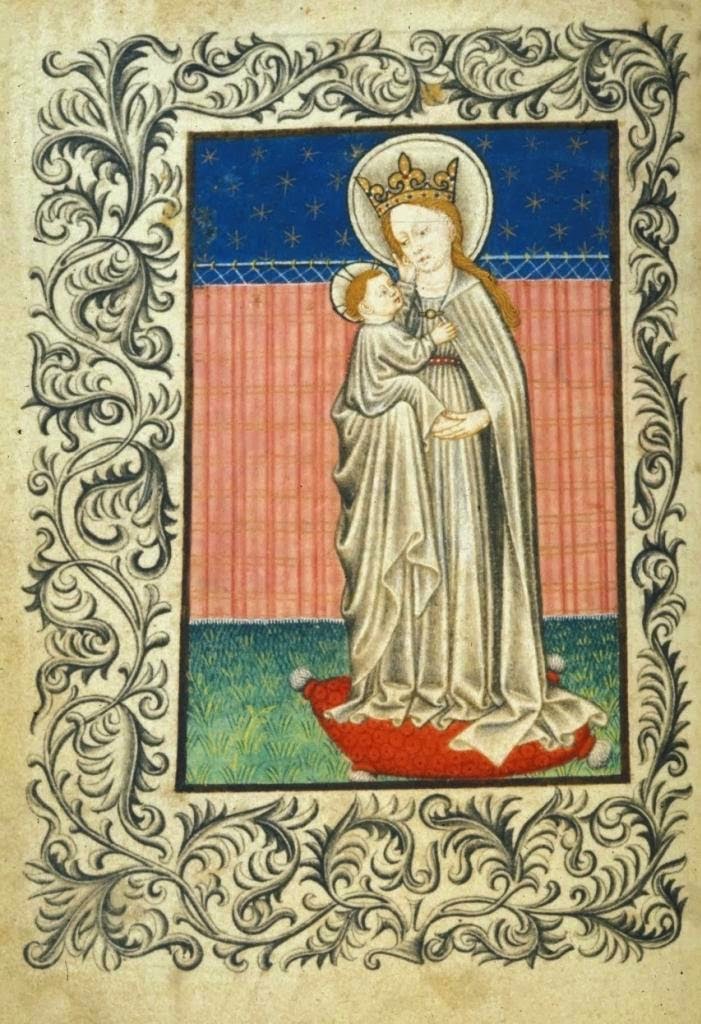 This is an exquisitely sad nativity song, a lullaby addressed to the baby Christ, but full of compassion and pain and regret for the suffering that the child will later undergo. It dates to the fourteenth century and comes from a manuscript compiled by a Franciscan friar, John of Grimestone.

Lullay, lullay, litel grome, kyng of alle thyng,
What I thenke of thy myschief me listeth wel litel synge;
But caren I may for sorwe, if love were in myn herte,
For swiche peynes as thou shalt dreyen were nevere non so smerte.
Lullay, lullay, litel child, wel myghte thou crie,
For-than thy body is bleik and blak, soon after shal ben drye.

Child, it is a wepyng dale that thou art comen in;
Thy poure cloutes it proven wel, thy bed made in the bynne;
Cold and hunger thou most thoeln, as thou were geten in synne,
And after deyen on the tree for love of all mankynne.
Lullay, lullay, litel child, no wonder thogh thou care,
Thou art comen amonges hem that thy deeth shullen yare.

John of Grimestone seems to have had a fondness for lullaby poems of this kind, since his manuscript also includes this lullaby and this on roughly the same subject. 'Lullay, lullay, little child, child, rest thee a throwe' is also close in style and theme to this poem in the same metre, which is not addressed to Christ but to an ordinary baby. In both cases the central image is of a crying child, innocent and uncomprehending, who weeps for no reason - and yet has a reason to weep, though he doesn't know it, because of the world he has been born into.

Here's a lightly modernised version, preserving the rhymes and some of the rhythm:

Lullay, lullay, little boy, king of all things!
When I think of thy sad state, I hardly wish to sing;
But I may lament for sorrow, if love be in my heart,
For such pains as thou shalt suffer were never none so sharp.
Lullay, lullay, little child, well mayst thou cry,
Thy body then will grow pale and white, and then it shall grow dry.

Child, it is a weeping world that thou art comen in;
Thy poor rags prove that well, thy bed made in the bin; [manger]
Cold and hunger thou must endure, as one begot in sin,
And after die upon the tree for love of all mankyn. [mankind]
Lullay, lullay, little child, no wonder that thou cry;
Thou art come among those who shall cause thee to die.

Lullay, lullay, little child, for sorrow thou mayst greet; [you well may cry]
The anguish that thou suffer shalt shall cause thee blood to swete; [sweat]
Naked, bound, shalt thou be, and afterwards sorely beat, [beaten]
No part of thy body free of pain shall be lete. [left]
Lullay, lullay, little child, it is all for thy foe,
The hard bond of love-longing that has bound thee so. 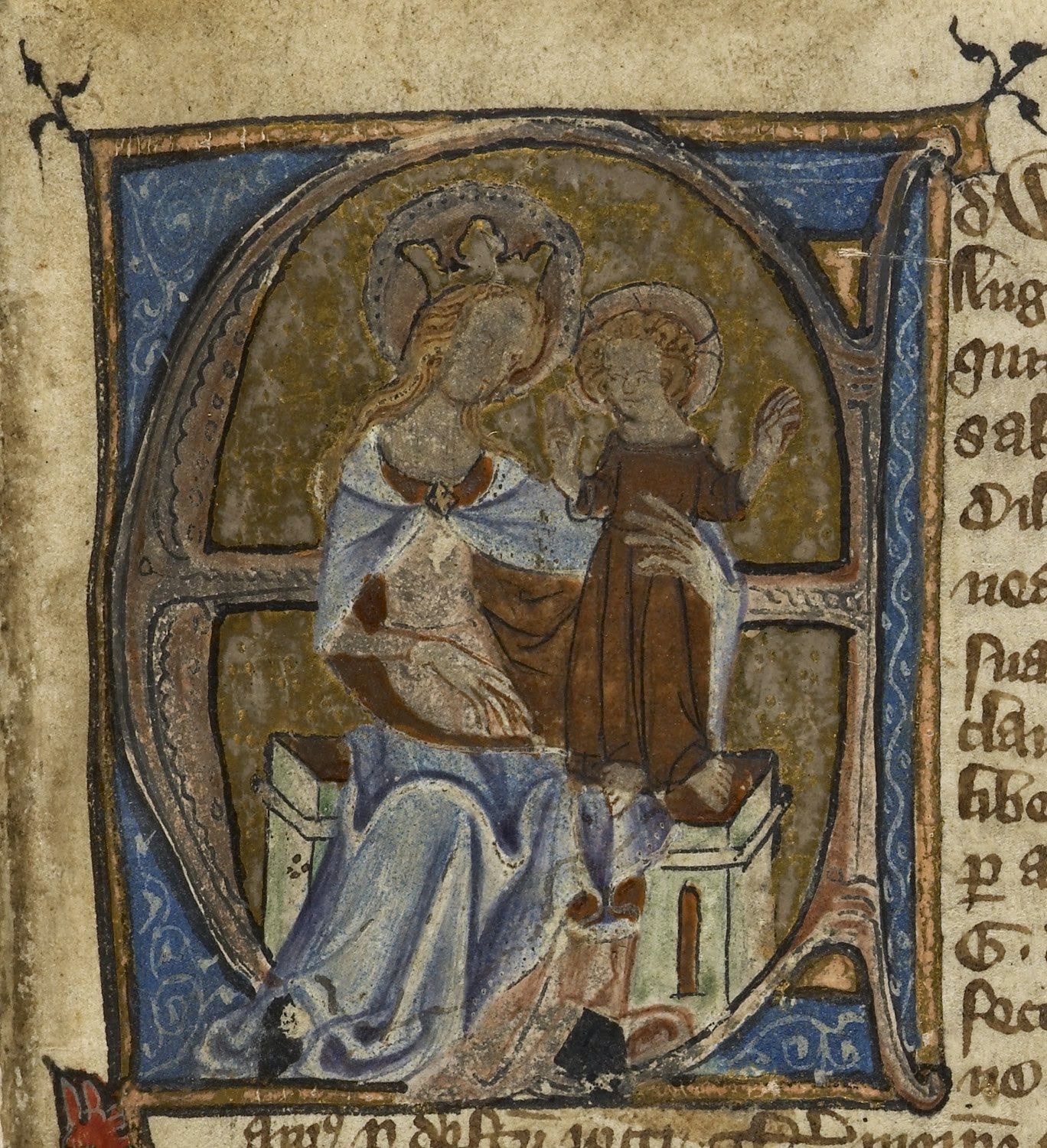 That last couplet is so memorable. I can't help feeling that this lullaby, fine poetry as it is, is almost too sad to post at Christmas, but it seems appropriate for the feast of the Holy Innocents, whose own sad, strange medieval lullaby still exerts a strong power:

O sisters two, how may we do,
For to preserve this day
This poor youngling for whom we do sing,
By, by, lully, lullay.

Herod the king, in his raging,
Charged he hath this day
His men of might, in his own sight,
All young children to slay.

Then woe is me, poor child, for thee,
And ever mourn and may,
For thy parting, neither say nor sing,
By, by, lully, lullay.

Of the many hundreds of surviving medieval carols, the Coventry Carol is one of the very small number which have found their way into the modern Christmas repertoire; it's regularly heard and performed at Christmas, widely known and recognised, both with its original haunting melody and in a diversity of new settings. It's a peculiar journey for a song from a medieval mystery play to take, from the streets of 16th-century Coventry to concert-halls and shopping malls, sung by everyone from Sting to Annie Lennox and the most unlikely performers. I find the popularity of this deeply sad song at Christmastime intriguing, and it makes me wonder what draws people to it. Whatever it is, perhaps it's something akin to what drew John of Grimestone and other medieval readers to lullabies like 'Lullay, little child'. There are in fact a considerable number of medieval lullabies which share the mood of the Coventry Carol: somewhere between lullaby and lament, full of melancholy and pity for the child being comforted, whether it's Herod's victims, the Christ-child, or any baby born into a weeping world. (Here are some more beautiful examples: 'This endris night / about midnight'; 'This maiden hight Mary'; 'As I lay on Yule's night'; 'Learn to love as I love thee'; 'Mary hath borne alone') They use the lullaby form, the genre of song above all others associated with tenderness, vulnerability, comfort and love, to explore deeply poignant and painful ideas of the nature of human sorrow.

I wonder if the popularity of the Coventry Carol today indicates that it expresses something people don't find in the usual run of joyful Christmas carols - this song of grief, of innocence cruelly destroyed. The Feast of the Holy Innocents (Childermas, as it was known in the Middle Ages) is not an easy subject for a modern audience to understand, and the images which often accompany it in medieval manuscripts, of children impaled on spears, are truly horrible. But they are meant to be; they are intended to disgust and horrify, and they're horrible because they're not fantasy violence but all too close to the reality of the world we live in. Children do die; the innocent and vulnerable do suffer at the hands of the powerful; and as this carol says, every single form of human love, one way or another, will ultimately end in parting and grief. Every child born into the world - every tiny, innocent, adorable little baby - however loved, however cared for, will grow up to face some kind of sorrow, and the inevitability of death. Of course no one wants to think about such things, especially when they look at a newborn baby; but pretending otherwise, not wanting to think otherwise, doesn't make it any less true.

Medieval writers were honest and clear-eyed about such uncomfortable truths. The idea that thoughts like these are incongruous with the Christmas season (as you often hear people say about the Holy Innocents) is largely a modern scruple, encouraged by the comparatively recent idea that Christmas is primarily a cheery festival for happy children and families. Our images of Christmas joy, both secular and sacred, are all childlike wonder and picture-perfect families gathered round the tree. And this is nice, of course, for those who have children or happy families, but for those who don't - those who have lost children or parents or others dear to them, those who face loneliness or exclusion, those who want but don't have children, family, or home - it can be intensely painful. Not everyone can choose not to think about grief at Christmas; many people will find it intrudes upon them, whether they wish it to or not. 'In sorrow endeth every love but thine, at the last'. The modern version of Christmas tends to sideline and ignore that pain, asking it to at least keep quiet so as not to spoil the 'magic'. But that's not the case with medieval writing about Christmas and the Christ-child. There are, of course, many merry and joyful medieval carols, and the season was celebrated in the Middle Ages with great enthusiasm; but there are also many carols like this which are serious, melancholy, and sad, which acknowledge the fact that the child whose birth is celebrated came to earth to die. Older writings on Christmas, like this lullaby, do not exclude but encompass human pain - it's that pain, they say, which Christ has come to earth to share. The idea is well expressed by John Donne, writing a little later than the medieval period (though only a few decades after the Coventry mystery plays were abolished), in a sermon he preached on Christmas Day 1626:

The whole life of Christ was a continual passion; others die martyrs, but Christ was born a martyr. He found a Golgotha, where he was crucified, even in Bethlehem, where he was born; for, to his tenderness then, the straws were almost as sharp as the thorns after; and the manger as uneasy at first, as his cross at last. His birth and his death were but one continual act, and his Christmas Day and his Good Friday are but the evening and morning of one and the same day. 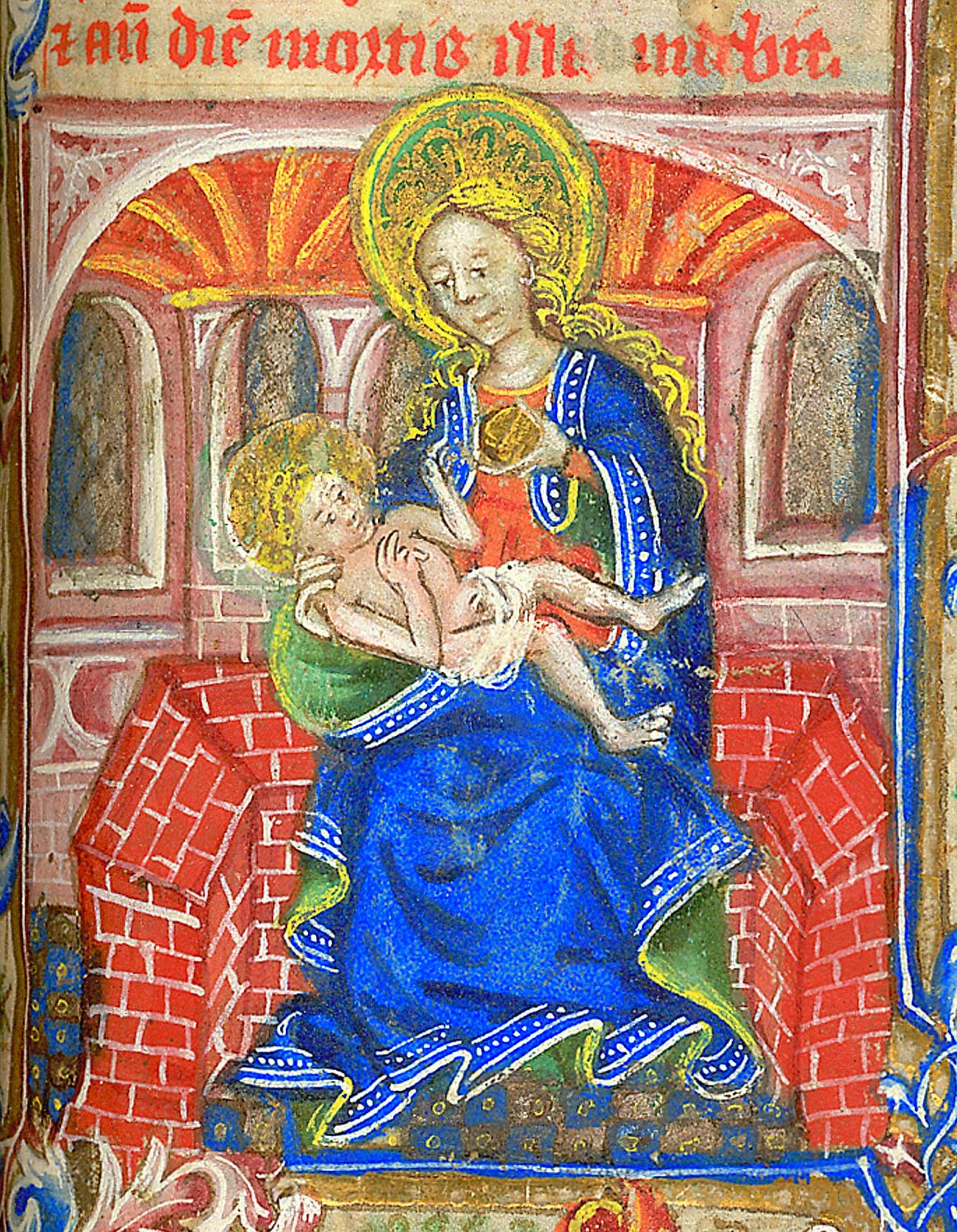 Not only at Christmas, but in many modern hymns and 'praise songs' the aspect of sadness is missing. This is a pity for many reasons: partly that it is not good for Christians to forget that (as I heard in an excellent sermon on Advent Sunday) when the book of our sins is open before God it is not our good deeds that will wipe them out but Christ's blood: but also because inevitably sorrow is part of human life, and it is no good burying that under the carpet or people have nowhere to turn to in time of need. (I know I'm old fashioned but it also helps if the hymns rhyme, scan, have a good tune which FITS THEM, and are therefore memorable). 'And when human hearts are breaking under sorrow's iron rod, then they find the selfsame aching deep within the heart of God' ('God is Love', Timothy Rees).

Such a beautiful post.
This passage "the crying child, innocent and uncomprehending, who weeps for no reason - and yet has a reason to weep, though he doesn't know it, because of the world he has been born into" reminded me of Gerard Manley Hopkins' "Spring and Fall." I hadn't seen it before, but now I sense a dialogue with this tradition. Thank you.
Sórrow’s spríngs áre the same.
Nor mouth had, no nor mind, expressed
What heart heard of, ghost guessed:

Reminds me of songs like Graham Kendrick's "Thorns in the Straw". And "Hush You my Baby", which I think used to be in Youth Praise.