'Mirabilem mysterium': A marvellous thing I have mused in my mind 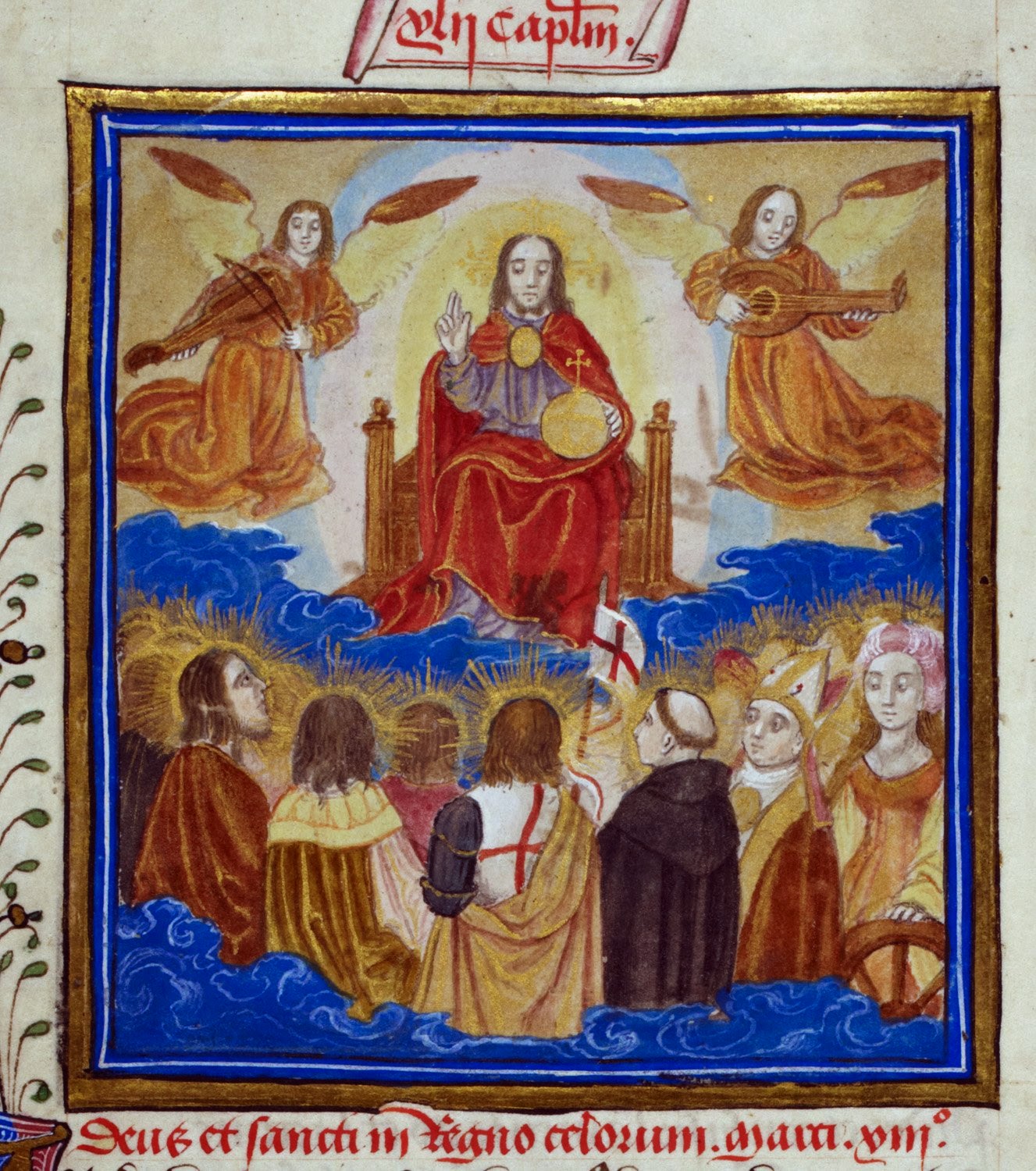 This carol, which dates from c.1500, comes from a manuscript (now BL Lansdowne 379) containing just two carols, amid a diverse range of other texts. According to Richard Greene's list, it includes: "English sermons on the Eucharist, for Easter, and for All Saints. A copy of Bishop William Lyndewode's Constitutiones Provinciales... Prescriptions for the stone, toothache, etc. Notes of the temperaments of the body and the four elements. Notes on chronology. English prayers (imperfect) by a member of the Charterhouse, London" (Greene, pp.304-5). Quite a spread of interests, spiritual and secular! This carol, with its sprinkling of Latin, has rather a learned air, and it's infused with the liturgy of Advent and Christmas: the Latin phrase in the refrain is taken from an antiphon used on the Octave of the Nativity (more properly 'Mirabile mysterium'), and the first verse is based on Psalm 85:11 (or 84:12), veritas de terra orta est et iustitia de caelo prospexit, used as an antiphon at Christmas and as the refrain in another English carol. The second and third verses appear to draw on the description of wisdom in Wisdom 8, which is used in the first of the Advent 'O' Antiphons, 'O Sapientia'; 'hym that ys bothe Alpha and O' seems to echo attingens a fine usque ad finem, and tomorrow I'll post a Middle English translation of the antiphon which renders it in just that way. I think the last verse is my favourite: 'celestial citizens' and 'brought to the bliss he bought us to' are both nice turns of phrase.

Mirabilem mysterium: [A marvellous mystery]
The Son of God is man become.

A marvellous thing I have mused in my mind:
How that Truth sprang out of the ground,
And Justice for all mankind,
From heaven to earth he came down.

Then Maria, that merciful maid,
Seeing man was damned for his trespass,
Hath sent down Wisdom, the truth to say,
Man to redeem and bring to grace.

Celestial citizens, for us may you pray
To him who is both Alpha and O,
That we may be saved on doomsday
And brought to that bliss he bought us to.

(The text of the second verse seems a bit confused, though you could play with it a little to help it make sense - 'He through Maria...', perhaps?) 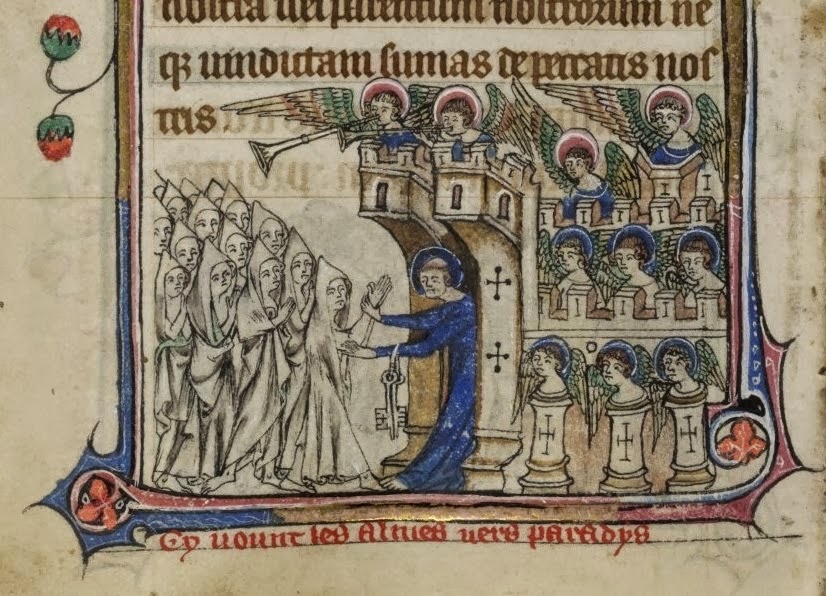 In the spirit of 'musing in my mind', I've been thinking about the positive response to my recent post on a medieval Advent carol, which both here and on Twitter was rather more enthusiastic than I was expecting. (I like the carol very much, but I don't always expect my readers to love what I love!) I wonder if it was in part the reaction of surprise. It seems to me that the medieval carols best known today are those which deal with the Nativity, or perhaps with the Virgin, and I wonder if this perpetuates a slightly inaccurate impression of what medieval carols are like: people often talk knowingly, though wrongly, about medieval carols as simple and charmingly 'naive', sweet little ditties about a baby in a manger and his gentle mother singing lullabies. But in fact there's almost no limit to the complexity of the ideas and images which medieval carols could encompass, informed by scripture, the liturgy and the writings of the Church Fathers; many of them are theologically learned, intelligent poems, no less sophisticated for being composed in short rhyming English verses. This carol, though not especially brilliant or original, belongs in that tradition, along with 'Behold and see', or 'This world wondreth', or the carol translations of 'Conditor alme siderum' and the O Antiphons (and to move away from Christmas, carols about the Trinity and the Eucharist and any number of other intricate concepts). In these texts there's a willingness to address huge, abstract ideas, things which are 'marvellous' and beyond understanding, yet which repay meditation and the exercise of poetic skill. The carols which explore the story of the Nativity, too, often do so in startlingly fresh and imaginative ways; I'm thinking of 'Under a tree', which imagines the pregnant Mary picturing her half-known, half-unknown future with her unborn baby, or 'Marvel not, Joseph', which conjures up a doubting, worried St Joseph, or the darkly beautiful lullabies in which the baby Christ describes his own death. These texts are infinitely thought-provoking, not only about the story of the Incarnation, in which abstract concepts like truth and justice and wisdom become concrete, become flesh, but also about human experience of time, memory, hope, and loss - many 'marvellous things' to muse on.
Posted by Clerk of Oxford at 5:45 pm

I found this quote in SPQR's dictionary. Cognates sometimes cause difficulties.

Many thanks for sharing all these gems.

Thank you for this delightful carol, and for your putting it in a broad context (all the links in which I have not yet followed)!

The first stanza suddenly made vividly clear to me what I assume must be the 'traditional' (Patristic and later) exegesis (or at least a major one among exegeses?) of this Psalm verse: "Veritas" names the full 'Humanitas' of Jesus and "Justicia" God the Son Who enhypostatized 'it' (or, Latin-grammatically, 'her'). And this makes the stanza a variation on the Antiphon cited in the refrain (and partly translated in its English, with "Deus" specified as "The Son of God"). And surely the 'Advent Prose',Isaiah 45:8, is resonating here, too (together with the preceding Psalm verse as well, come to that).

My 'take' on the second stanza is that we have something which would not have been possible with the grammar of an earlier stage of English. I would read 'Sapiencia [subject], seying man was dampnde for hys tre[s]pas, hathe sent down Maria [direct object], that marcyfull maye, the sothe to saye [with, I would venture, "Quomodo fiet istud, quoniam virum non cognosco?"and "Ecce ancilla Domini: fiat mihi secundum verbum tuum" (St. Luke 1: 34, 38) in mind with "the sothe"], man to redeme and bryng to grase.' 'Hathe sent down Maria' would here seem bold (perhaps even odd?) as imagery, but not impossible as theological anthropology.

(Or should, or could, we read an implied subject, Deus, from the Antiphon, with "Sapiencia" as direct object, indicating God the Son in particular, with "Maria" as indirect object: '[God] hathe sent down Sapiencia [to] Maria'? Or could it be deliberately ambiguous to allow either reading or both?)

I feel sure there must be an evocation of Mary as 'Sedes Sapientiae', here, in any case.

The "Celestyall cytezens", together with the dating of this carol to c. 1500, made me think of another work of around that date, the panel attributed to Ludovico Brea in the Church of St. Martial in La Brigue, usually described as the Assumption or Coronation of the Virgin but labelled "Paradise" as the frontispiece of Charles Williams's The Descent of the Dove (1939).