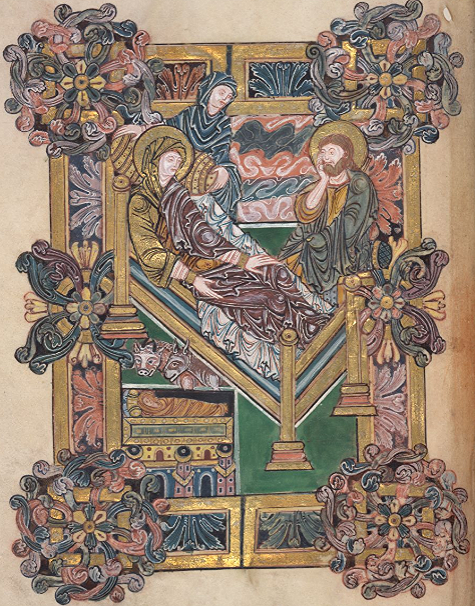 Here are a few short extracts from one of Ælfric's sermons for Christmas Day, written at the end of the tenth century. The full sermon can be found here; this is one of two sermons he wrote for Christmas Day, and you can read the other here. He begins by translating the story according to Luke's Gospel:


Do you even need a translation of this?

Then it happened, while they were lodging in the town of Bethlehem, that her time came to give birth; and she gave birth to her first-born son and wrapped him in baby-clothes and laid the child in the asses’ manger, because there was no room in the inn.


He goes on to translate the rest of the Gospel story before interpreting it, but for that you might prefer to read (and listen to) the translations in the West Saxon Gospels, here. Note that Christ is born in a gesthus and laid in a binn - you don't need me to tell you what those words mean! 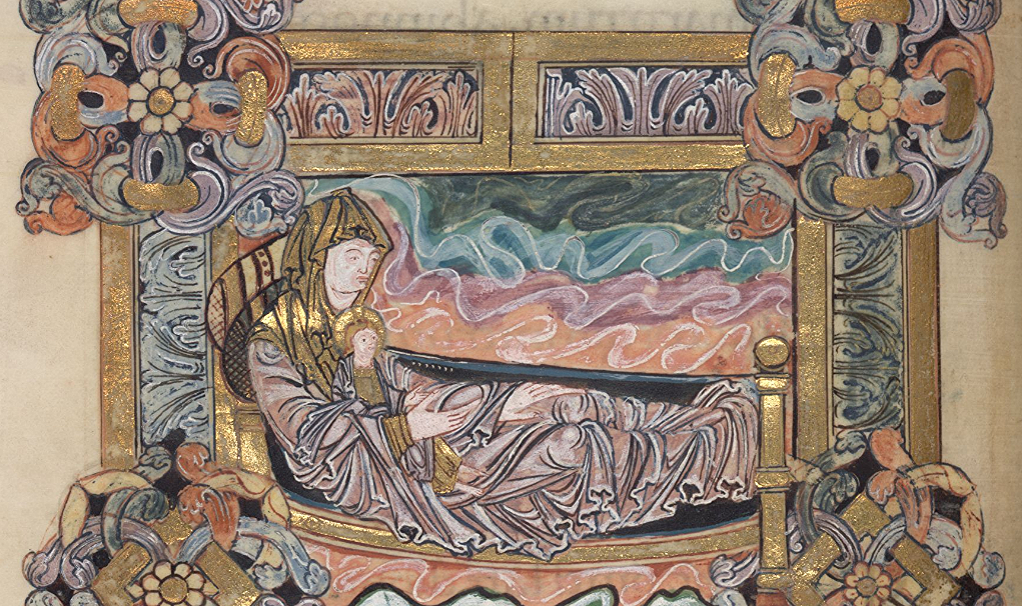 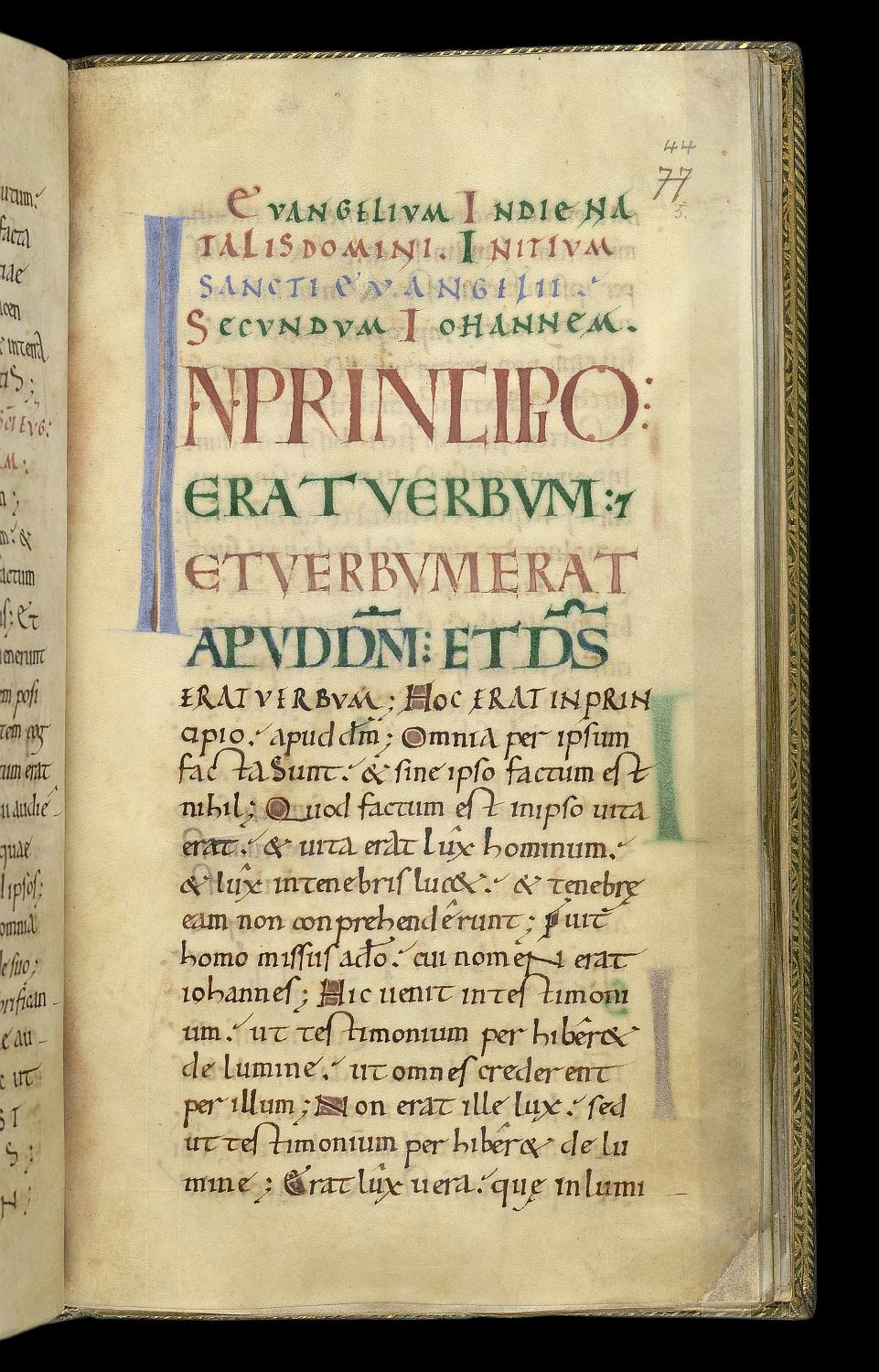 Mary gave birth to her first-born son on this present day and wrapped him in baby-clothes, and because of lack of room she laid him in a manger. That child was not called her first-born because she afterwards had other children, but because Christ is the first-born of many spiritual brothers. All Christians are his spiritual brothers, and he is the first-born in grace and in divinity, born of the Almighty Father. He was wrapped in poor baby-clothes so that he could give us the immortal garment which we lost at the beginning of the world through man’s transgression. The Son of Almighty God, whom the heavens could not encompass, was laid in a narrow manger so that he could save us from the narrow confines of hell. Mary was a stranger there, as the Gospel tells us, and the crowd of people meant the inn was very full [the Old English word is genyrwed, 'narrowed, made crowded']. The Son of God was crowded in his lodging-place, so that he could give us spacious room in the heavenly kingdom, if we obey his will. He asks for nothing from us as reward for his labour, except the salvation of our souls, that we prepare ourselves for him, pure and unstained, for bliss and everlasting joy...

The shepherds then spoke amongst themselves, after the departure of the angels: "Let us go to Bethlehem, and see þæt word þe geworden is, which God has made known to us." O, how rightly they confessed the holy faith with these words! "In the beginning was the Word, and the Word was with God, and the Word was God." A word is the revealing of wisdom, and the Word, which is the Wisdom, is brought forth from the Almighty Father, without beginning; for he was ever God of God, Wisdom of the Wise Father. He is not created, because he is God, and no created thing; the Almighty God created all created things through that Wisdom, and gave them life through the Holy Ghost.


This last paragraph is just glorious, as Ælfric ties himself up in a joyous knot of language over the phrase þæt word þe geworden is. In Old English word can mean 'message, tidings', and geworden can just mean 'happened', so what the shepherds say to each other is 'let us go to Bethlehem, and see these tidings which have happened'. But because word also means 'word', and geweorþan also means 'to come to be', the shepherds' speech - 'with these words' (mid þisum wordum) - can be interpreted in another way. þe word is geworden: the Word has come to be. There's something similar in the Vulgate, where the shepherds say videamus hoc verbum quod factum est (and the linking of this to the opening of John's Gospel was traditional), but the English is even more intimately linked because word is embedded within geworden. And since words can be mined for meaning in this beautifully complex way, 'a word is the revealing of wisdom' (there's a motto for all students of literature to take to heart!); and this Word is the revealing of Wisdom, God from God, Wisdom from the Wise Father. The Word is not geworht, he is geworden - not 'created', but 'come to be'. This is difficult to convey in translation, but it's a beautiful felicity of language and you can almost feel Ælfric delighting in it, grammarian and translator and lover of language as he was. The things words can do! 'A word is the revealing of wisdom'; and "On frymðe wæs word, and þæt word wæs mid Gode, and þæt word wæs God".

What a joy to read and listen to this today! Merry Christmas!

Merry Christmas, and thanks for sharing this. The images are stunning, the recording from John is much appreciated.

I was a little sad to be told in our Christmas Day sermon that we were not to take 'Word' in its literal meaning: for anyone who thinks about language at all the idea that Christ is the Word part of God and that it was only through a Word that anything was made that was made by God is profoundly moving and exciting......

Thanks for all the knowledge you pass along to us. Your unpacking of <> is particularly fun.