As promised, let's go on a virtual visit to Barfreston and its extraordinary Norman carvings. Barfreston is a tiny place - as far as I could see, the entire village consisted of the church, a (friendly and welcoming) pub, and sheep.

The church is a funny little shape, as you can see: 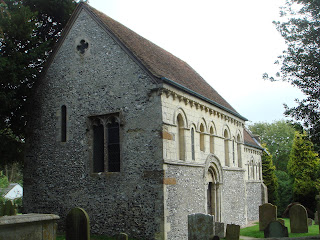 It doesn't have a tower - the bell is in a handy nearby yew tree. Essentially the church is made up of two box-like sheds, but the external decoration is stunning. The south door is my favourite. I included the majestic tympanum of Christ enthroned in my post about Patrixbourne, but it's really the surrounding carvings which are so special. 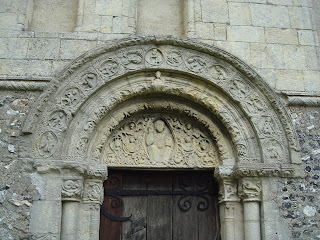 A detail from the central panel - angels and gryphons: 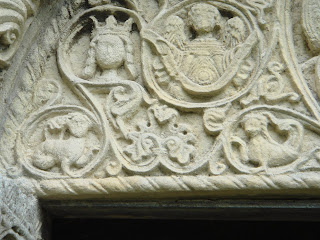 The arch has three bands - the innermost carved with foliage, then one of beasts, and the outermost shows figures from 12th-century rural life. It's such a characteristically medieval style of decoration, reminiscent of the illustrations you find in manuscripts and churches throughout the period. This ploughman reminds me of nothing so much as Piers Plowman: 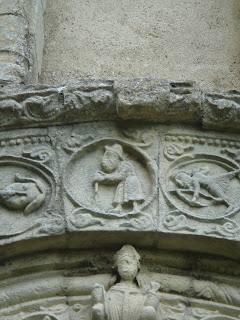 And this Norman knight is exquisite: 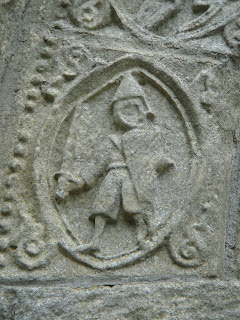 Now for the animals. Often in medieval illustrations, there's a tendency to show animals engaging in human activities, or reversing the natural hierarchy of predator and prey - like the famous image from the Macclesfield Psalter of a little man being chased by a giant flatfish (!) or the postcard they sell in the Bodleian showing a manuscript illustration of rabbits hunting humans (who are hiding in a tree to escape). Along the same lines, this carving shows a monkey, riding a goat, with a captured rabbit slung over its shoulder: 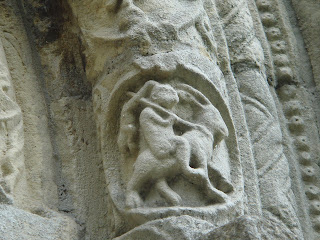 We have these drinking animals, who look positively diabolical: 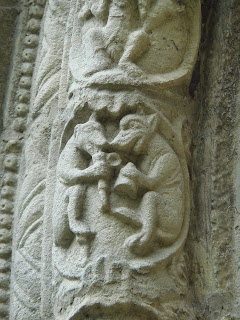 An animal playing a harp, and one doing gymnastics (well, dancing, I suppose): 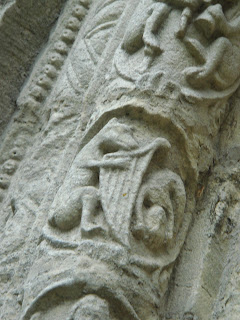 And some musicians. I can't identify the instruments myself, but you can see the one in the middle is playing some kind of stringed instrument, while the monkey or whatever next to him is playing some version of the pan pipes: 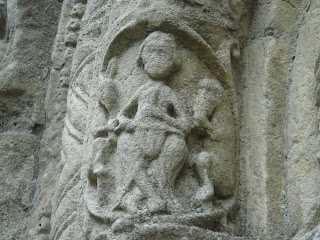 We also have some representational animals, of the kind familiar from bestiaries, where the characteristics of the animal traditionally symbolise a certain concept or figure - such as the pelican or the phoenix as Christ. This is a porcupine, which was believed to steal grapes by carrying them away on its spines; it thus represents the devil, who steals souls away from Christ. It's the cutest devil ever, don't you think? 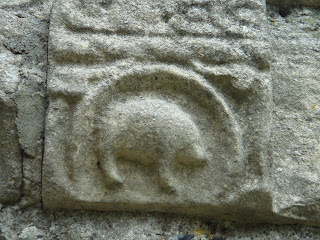 That's just the south door. More from Barfreston another day.
Posted by Clerk of Oxford at 12:23 pm