Mrs Cecil Frances Alexander is sometimes treated as a bit of a joke as a hymnwriter. People who want to make fun of Victorian hymns use her compositions as an example of all that they think is sentimental and cliched about Victorian religion, ignoring or ignorant of the fact that the hymns they're making fun of - especially 'There is a green hill far away' and 'All things bright and beautiful' - were written for children, not sophisticated adults like themselves. Sadly, I have even heard the odd college chaplain say this.

(The clue, if you were wondering, is in the title of the book in which those works were first published - Hymns for Little Children. Not much of a riddle, is it?)

Anyway, whatever you may think of those hymns, she wrote some which are certainly good. I like this one, and since it's still the Easter season, I feel able to post it.

There's even an Oxford connection, since her husband William Alexander, Archbishop of Armagh, was educated at Brasenose - one of the better colleges... 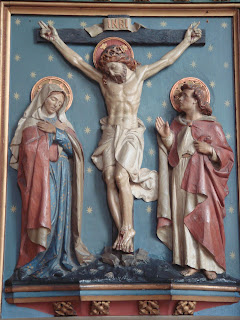 He is risen, he is risen!
Tell it out with joyful voice:
he has burst his three days' prison;
let the whole wide earth rejoice:
death is conquered, man is free,
Christ has won the victory.

Come, ye sad and fearful-hearted,
with glad smile and radiant brow!
Lent's long shadows have departed;
Jesus' woes are over now,
and the passion that he bore--
sin and pain can vex no more.

He is risen, he is risen!
He hath opened heaven's gate:
we are free from sin's dark prison,
risen to a holier state;
and a brighter Easter beam
on our longing eyes shall stream.

The Crucifixion scene is from Canterbury Cathedral. Technically I suppose it's not appropriate for a Resurrection hymn, but it is so very colourful...
Posted by Clerk of Oxford at 8:53 pm