On this day in 1040, King Harold Harefoot died in Oxford. Harold was England's third Danish king, the son of Cnut (his enemies said he was in fact the son of a cobbler, but that was surely just slander). Cnut had children by two different women: shortly after his arrival in England in 1013 he married Ælfgifu of Northampton, a member of a powerful Mercian family, and they had two sons, Svein and Harold (named for Cnut's father and grandfather). After becoming king of England in 1016, Cnut married the widow of his predecessor, the formidable Emma of Normandy, and they also had two children, Harthacnut and Gunnhild. Here's a family tree from a later medieval manuscript (BL Royal 14 B VI): 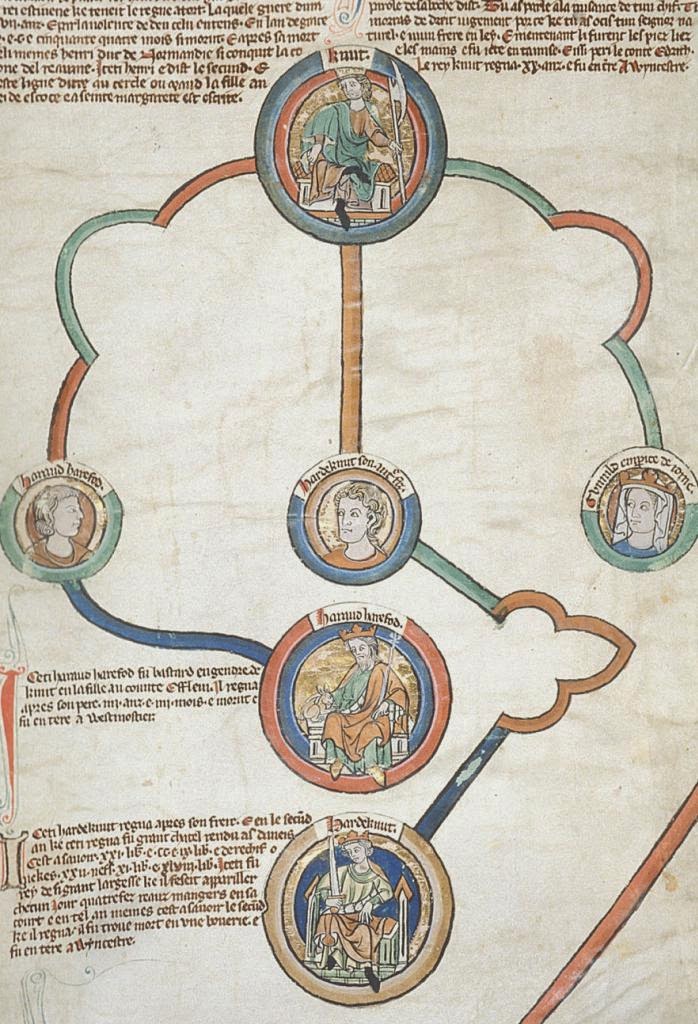 This omits Harold's brother Svein, because he never played any part in English history: he was sent to Norway with his mother in c.1030 and ruled there as Cnut's regent, with little success.

After Cnut's death in 1035, both Harold and Harthacnut seem to have been considered viable candidates for the throne. The Anglo-Saxon Chronicle tells us that a council was held in Oxford to discuss the matter, at which Harold was supported by Mercia and the north of England, as well as by the Danish fleet (the liðsmen), who were based in London. Wessex preferred his younger half-brother, but Harthacnut was away in Denmark at the time and thus missed his chance; before he could return to England, Wessex gave in and Harold became sole king. (Although the Archbishop of Canterbury supposedly refused to crown him.) Loyalty to the brothers split down traditional lines of allegiance in Anglo-Saxon England: Mercia and the north on one side, Wessex (by this period, the whole of England south of the Thames) on the other. Although there's a tendency to see Harold as the 'Danish' candidate, it's worth remembering that he was English on his mother's side, while Harthacnut was the son of a Danish father and a Norman mother, and both had spent more of their lives in Scandinavia than in England. Also, although Harold is sometimes called Cnut's 'illegitimate' son, pre-Conquest England (and Denmark) didn't have quite the same ideas of legitimacy as we do; Queen Emma certainly promoted the idea that her husband's other children should give place to her son Harthacnut, and Cnut may have agreed to this - but he made Svein regent of Norway, so only to a certain extent. 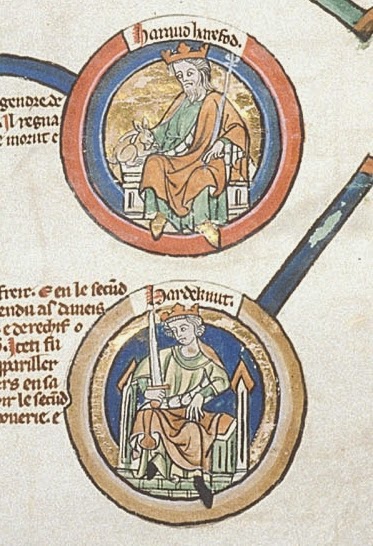 Harold's reign lasted only three years (1037-1040) and we don't have much to tell us what he did as king. Perhaps more interesting than what he did is what his early death prevented him from doing; it's intriguing to speculate about what might have happened if he had lived longer. He was only in his early twenties when he died - for some reason, not one of Cnut's four children lived to see the age of thirty. If Harold had lived and held his kingdom firmly, Harthacnut might never have returned to England; in that case Emma's other son, Edward the Confessor, would never have returned from Normandy either. No King Edward means no Norman Conquest, probably. Our view of this crucial period is shaped to a very great extent by the fact that history is written by the winners, and in this case Emma and her sons were the 'winners', literally writing the history of this time in the way which pleased them best; Harold and his supporters never got a chance to tell their version of the story. It's useful to try and push against the appearance of inevitability which history, particularly familiar history, tends to acquire; by the late eleventh century it might already have seemed inevitable that Edward should return to the throne and the Danish kings became a blip in Anglo-Saxon history - but it really wasn't. If Harold had lived, 'everything would have been different. For it would have been another world'...

Anyway, he didn't. He died in 1040, and was initially buried at Westminster. He may have had at least one son, who eventually became a monk in Aquitaine, but there was no one else to succeed him, and Harthacnut returned to England and was accepted as king. Harold's death, like his life, was not peaceful (even on his deathbed he was embroiled in a dispute between the two Canterbury monasteries about ownership of the port of Sandwich.) The Anglo-Saxon Chronicle, no fan of Harold or Harthacnut, describes what happened next in 1040 with unconcealed contempt (from MS. C):

'Here King Harold died. Then people sent to Bruges for Harthacnut, thinking they did well (ha!), and he came here with 60 ships before midsummer. He established a tax so harsh that it could hardly be borne... and those who had previously been so eager for him then became disloyal to him. And he never did anything kingly as long as he ruled. He had the dead Harold dragged up and thrown into the marsh.'

John of Worcester adds more detail, saying that Harthacnut, with the assistance of Earl Godwine, Ælfric Archbishop of York, Styr the master of the king's household, Eadric his steward, Thrond his executioner and 'other men of great rank', had Harold's body exhumed and beheaded, and the body thrown into the Thames. A fisherman dragged it up again and gave it to 'the Danes', who buried it at their church in London (probably St Clement Danes).

Poor Harold! If this story is true, it helps to explain why Harthacnut was so 'unkingly'. But Cnut's sons were not destined to rest in peace, it seems: Harthacnut himself was buried beside his father at Winchester, but in 1642, during the Civil War, his bones (together with those of Cnut himself, and Emma, William Rufus, and a number of other early kings) were dug up by Parliamentarian soldiers and scattered on the floor of the cathedral. Mixed up together, they were collected and preserved in six mortuary chests, where they now remain, unidentified - the greatest men and women of late Anglo-Saxon England, a jumble of bones. A kind of poetic justice for Harthacnut, at least, if he really did treat his half-brother's body with such disrespect.
Posted by Clerk of Oxford at 10:56 am

Great post! My memory is a little shaky on the subject, but is the story of Harold's rude exhumation an invention by William of Poitiers, or does he merely repeat an old story?

It's in ASC C and D, and in John of Worcester (the fullest account, with the names of those who took part) - I don't remember that it's in William of Poitiers. William doesn't usually like to make Harthacnut look as bad as this, as I recall ;)

Thanks for the correction! I really need to get back to these accounts and peruse those sections not pertaining to the Confessor also. Fortunately William's Gesta Guillelmi is mercifully short, so that should be a good place to start.