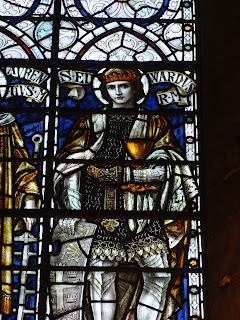 18th March is the feast of St Edward the Martyr, a teenage king whose death - in the view of various later medieval writers - was the beginning of the end of Anglo-Saxon England. Edward was the son of King Edgar, who when he died in 975 left two young sons by two different women. The elder, Edward, was in his early teens, Æthelred (later 'the Unready') a little younger. They both had claims to the throne, and they both had factions supporting them: Edward was supported by St Dunstan and Oswald of Worcester, while Æthelred's faction was headed by his mother, Ælfthryth. In 978 Edward was murdered, after less than three years as king, and Ælfthryth came to be blamed for his death. The extent of her involvement can't be known for sure, but the most lurid stories circulated about her guilt in later centuries (has legend ever been able to resist a wicked stepmother?). This is how William of Malmesbury tells the story, writing in the twelfth century (I'm particularly fond of the bit about the immovable horses!):

King Edward treated his brother [Æthelred], who was still a boy, and his stepmother with proper warmth of feeling, keeping the royal title for himself alone, but allowing them all other privileges. He followed in the footsteps of his father's religious activity; he listened to good advice and took it to heart. The woman however, with a stepmother's hatred and a viper's guile, in her anxiety that her son should also enjoy the title of king, laid plots against her stepson's life, which she carried out as follows. He was coming back tired from hunting, breathless and thirsty from his exertions; his companions were following the hounds where chance had led each one; and hearing that they were quartered in a neighbouring village, the young man spurred his horse and hastened to join them, all by himself, too innocent to have fears and no doubt judging other people by himself. 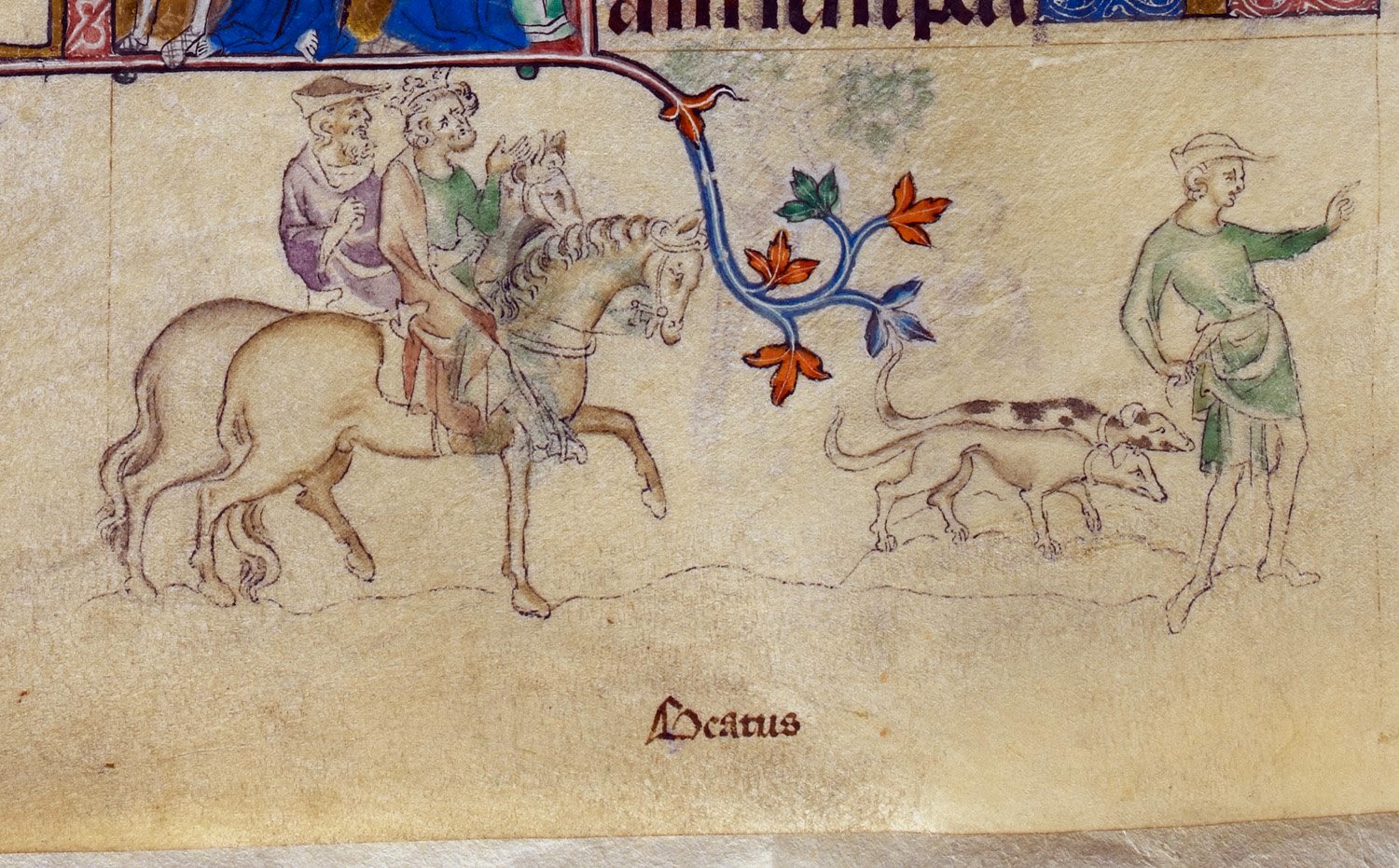 On his arrival, his stepmother, with a woman's wiles, distracted his attention, and with a kiss of welcome offered him a drink. As he greedily drank it, she had him pierced with a dagger by one of her servants. Wounded mortally by the blow, he summoned up what breath he had left, and spurred his horse to join the rest of the party; but one foot slipped, and he was dragged through byways by the other, leaving streams of blood as a clear indication of his death to those who looked for him. At the time they ordered him to be buried without honour at Wareham, grudging him consecrated ground when he was dead, as they had grudged him the royal title while he was alive. So they enjoyed a public festival of rejoicing, as though they had buried his memory along with his corpse. 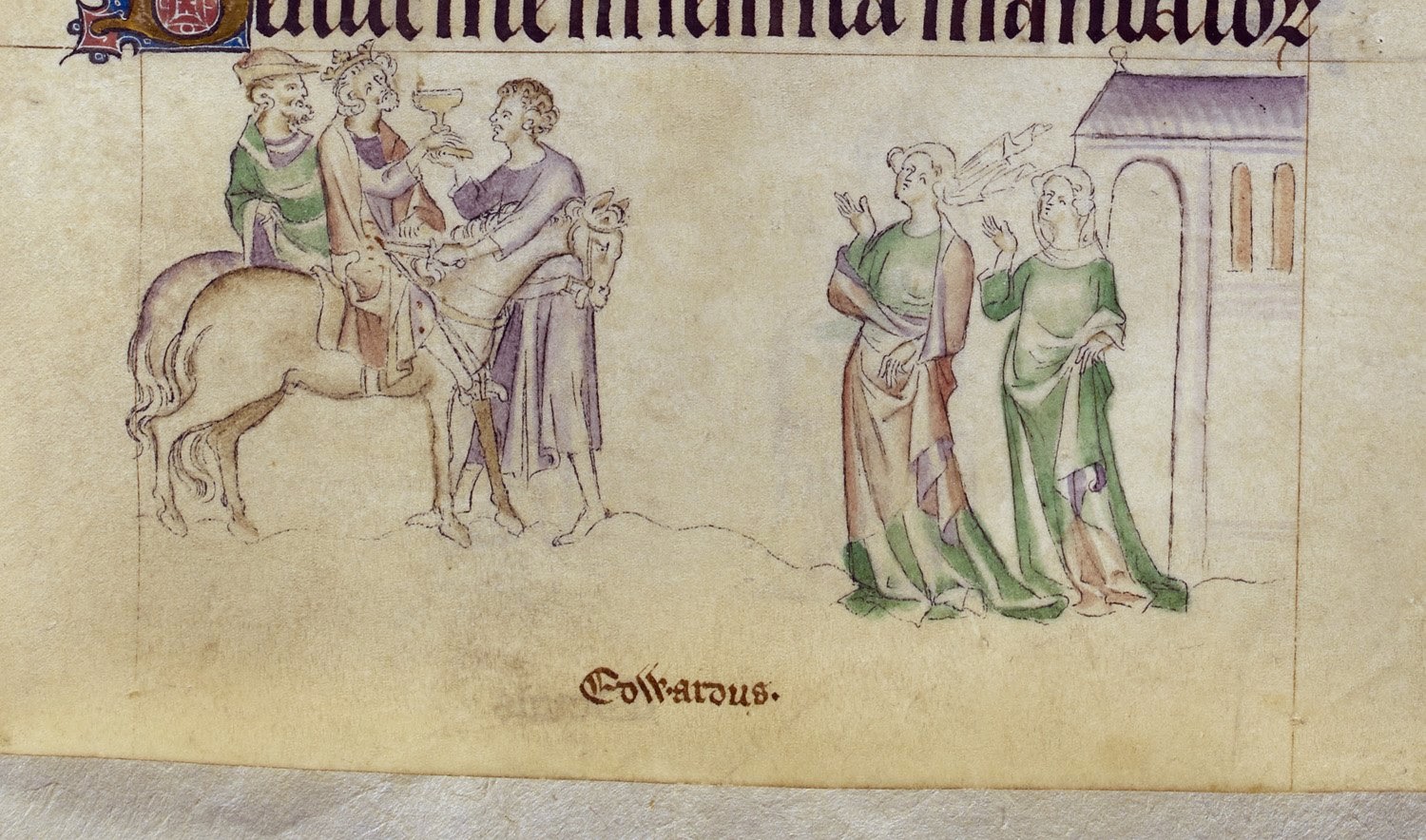 But the divine Serenity acknowledged him, and did honour to the innocent victim with the glory of miracles: so far do Heaven's judgements outweigh those of men. There [at his grave] lights shone in the sky, there a lame man walked, there a dumb man regained the use of his tongue, there every kind of sickness gave way to health. The story spread through all England, and made the martyr's merits well known.

Aroused by this, the murderess planned a journey to the place; she had already mounted her horse and was spurring him on, when she felt the manifest anger of God. Her familiar palfrey on which she had been used to ride, and which had before been swift as air and could outstrip the very winds, then by the will of God stood motionless. The grooms set about it with whips and shouting, to make it carry its powerful mistress with its wonted eagerness; their labour was spent in vain. She changed her mount, but with the same result. At length, though slowly, her unfeeling heart understood the purport of the portent, and what she did not deserve to do herself she agreed to get done by another hand.


After its first burial at Wareham, Edward's body was taken to Shaftesbury Abbey, and there pilgrims continued to seek out the tomb of the young martyred king. Ælfthryth retired to a nunnery at Wherwell, which she had founded (supposedly) in penance for the murder of Edward. William of Malmesbury goes on:

And since an unruly spirit is its own torment, and an anxious mind suffers its own evil genius even in this present world, Ælfthryth fell from her pride of royalty into a dire repentance, such that for many years at Wherwell she clad her delicately-nurtured limbs in haircloth and at night slept stretched on the ground without her pillow, besides inventing all the tortures she could for her body, a beautiful woman and finely faithful to her husband but worthy of punishment for the great crime she committed. It is believed, and is a widely popular view, that it was through her cruelty to Edward that the whole country, for a long time after, groaned under the barbarian yoke. 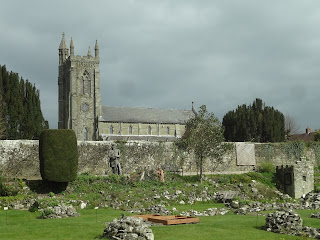 The ruins of Shaftesbury Abbey

The murder of Edward cast a long shadow over Æthelred's reign. Although Æthelred was too young to have had any part in it himself, it was seen - in hindsight - as a bad omen, the first disaster of a long but troubled reign which was to be beset by factional fighting at court and the renewed pressure of Viking raids. It culminated in the Danes conquering England and driving Æthelred and his family into exile - the ultimate punishment for the murder of his brother, if you believe the medieval historians. St Dunstan, who was Archbishop of Canterbury at the time of Edward's death and Æthelred's accession, was later supposed to have prophesied to Æthelred that "because he had obtained the throne by his brother’s blood, he would live in blood, and his descendants would be destroyed by a cruel invasion of barbarians; and, moreover, the whole country would be depopulated for many centuries by the fierce dominion of these men". In recording this, Dunstan's hagiographer (in this case Eadmer), writing on the other side of the Norman Conquest, adds that "though Dunstan said these things would not happen while he was alive, nevertheless, he asserted in a very accurate prophecy that these things would eventually come to pass in every detail - just as we read in chronicles and see today". 'Today' is the early twelfth century; the suggestion is that St Edward's murder brought about not only the Danish Conquest of England, but the Norman Conquest too. 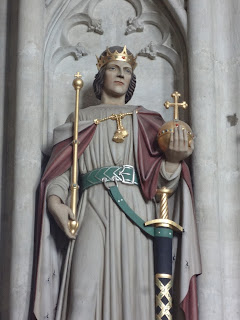 Edward the Martyr (Salisbury Cathedral)
Posted by Clerk of Oxford at 3:06 pm