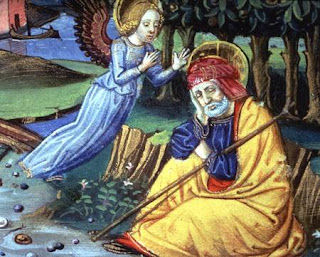 1. When righteous Joseph wedded was
To Israel's Hebrew maid,
The Angel Gabriel came from Heav'n,
And to the Virgin said:
'Hail, blessed Mary, full of grace,
The Lord remain on thee;
Thou shalt conceive and bear a Son,
Our Saviour for to be.'

Chorus:
Then sing you all, both great and small,
Nowell, nowell, nowell;
We may rejoice to hear the voice
Of the Angel Gabriel.

2. 'Tis wondrous strange,' said Mary then,
'I should conceive and breed,
Being never touched by mortal man,
But pure in word and deed.'
The Angel Gabriel thus replied,
'Tis not the work of man,
But as the Lord in Heav'n decreed,
Before the world began.'

3. This heavenly message she believ'd,
And did to Jewry go;
There three months with her friends to stay,
God's blessed will to show;
And then return'd to Joseph back,
Her husband meek and mild,
Who thought it strange his wife should be
Untouch'd and yet with child.

4. Then Joseph he to shun the shame,
Thought her for to forsake,
But then God's angel in a dream
His mind did undertake.
'Fear not, just Joseph, this thy wife
Is still a spotless maid;
And not consent of sin,' said he,
'Against her can be laid.

5. For she is pure, both maid and wife,
And mother of God's own heir;
The babe of Heav'n and blessed lamb
Of Israel's flock so fair.
To save lost man from Satan's fold,
Which Adam lost by thrall,
When first in Eden Paradise
Did forfeit by the fall.'

6. Thus Mary and her husband kind
Together did remain,
Until the time of Jesus' birth,
As Scripture doth make plain.
As mother, wife, and virtuous maid,
Our Saviour sweet conceiv'd;
And in due time to bring us him,
Of whom we were bereav'd.

7. Sing praises all, both young and old,
To him that wrought such things;
And all without the means of man,
Sent us the King of Kings;
Who is of such a spirit bless'd,
That with his might did quell,
The world, the flesh, and by his death,
Did conquer death and hell.


A carol collected in 1920 by Rev. G. H. Doble, from a woman named Elizabeth Hocking who lived in Redruth, Cornwall. Mrs Hocking, who was 84 at the time, had learnt this carol from her mother as a child in the 1840s. You can find the tune here; it's a nice one. Happy St Joseph's Day!
Posted by Clerk of Oxford at 10:30 am

Do you know anything of the painting's origins? The artist, the date, the country? Anything?

Yes, sorry for the slow reply - it's from a 15th-century Italian manuscript illustrated by Cristoforo de Predis (the 'Predis Codex', Codice Varia 124 in the Biblioteca Reale, Turin).