Yesterday I decided to go to Christ Church Cathedral for Evensong; on St Frideswide's day it seemed the place to be.  It was dark, the grey end of a drizzling kind of day, and I couldn't help thinking of John Donne: 'Churches are best for prayer that have least light'.  Before the service, I went to pay a visit to St Frideswide: 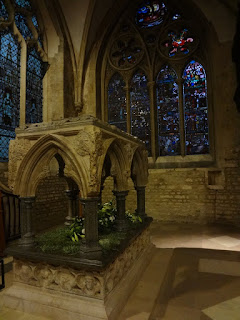 Someone had decorated the lower part of the shrine with lilies, carnations, and a bed of aromatic rosemary stalks, all green and white.  I was just about able to take photographs of the lower part of the Burne-Jones window before it got too dark, including the ones I posted yesterday and also this, which was too frivolous for the other post: 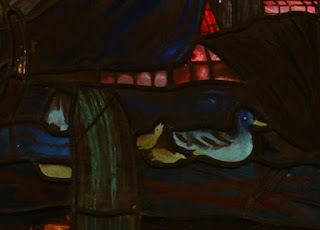 These ducks appear in the scene of Frideswide fleeing to Binsey.  Above them, Frideswide is desperately clinging to a tree (or something; it was a bit too dark to tell), but the ducks pursue their merry way down the Thames.

I had gone hoping to hear a hymn called 'Frideswide, our patron', which is sung to the tune 'Thine be the glory', and which the internet had told me was quite something to experience; however, for some reason we did not sing that.  Instead we sang this hymn, to this stirring tune:

In our day of thanksgiving one psalm let us offer
For the saints who before us have found their reward;
When the shadow of death fell upon them, we sorrowed,
But now we rejoice that they rest in the Lord.

In the morning of life, and at noon, and at even,
He called them away from our worship below;
But not till His love, at the font and the altar,
Had girt them with grace for the way they should go.

These stones that have echoed their praises are holy,
And dear is the ground where their feet have once trod;
Yet here they confessed they were strangers and pilgrims,
And still they were seeking the city of God.

Sing praise, then, for all who here sought and here found Him,
Whose journey is ended, whose perils are past;
They believed in the Light; and its glory is round them,
Where the clouds of earth’s sorrows are lifted at last.


The words are by William Henry Draper (1855-1933), who also wrote this Lenten hymn.  I wasn't entirely sure about it when I first saw the words, but they grew on me as I sang; verse 3 is particularly nice, and could not have been more appropriate within those walls.  Of course the stones of today's Christ Church, though they have echoed Frideswide's praises for centuries, were never beheld by the eyes of the saint herself; but the ground she walked on can't be far away from the cathedral.  I liked the last two lines of verse 2, as well; 'girt with grace' is a felicitious phrase, which had me pondering the verb to gird - the suggestion is of the ceremony by which a knight receives his sword before the altar, but also something more nebulous (literally) because to be girded is to be 'surrounded' by grace as if by a cloud of witnesses.  And I thought about a garth, etymologically related to the verb, a word which came from Old Norse into northern English: enclosed ground, 'a garden walled around', and the green space within a cloister which in Oxford we now call a quad, of which Christ Church has such a splendid example.  A girded garth can be a little garden or all the space of the known world, the Miðgarð in which we all live; that's the 'dear ground' St Frideswide trod.

Then the choir sang this anthem by Orlando Gibbons:

Almighty and everlasting God,
mercifully look upon our infirmities,
and in all our dangers and necessities
stretch forth thy right hand to help and defend us,
through Christ our Lord. Amen.


I've heard this anthem many times, and sung it not a few, but it moved me last night in a way it never has before. The choirboys were tremulous on their high notes, and sounded more than usually childish as they came in with 'and in all our dangers and necessities'; somehow this makes it all the more plaintive, as on our behalf they put forth a prayer they are too young to understand.  The words (a collect from the Book of Common Prayer) are very simple; they ask for everything and nothing, for all one could wish a merciful God would do for people he loved, and all one ought not perhaps really to hope for.

I can't decide how to finish this post or remember what the point of starting it was, but I hope you enjoyed the music, anyway.
Posted by Clerk of Oxford at 11:02 pm