The Feast of St Frideswide 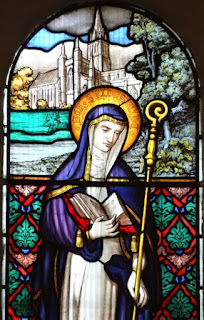 St Frideswide in the church of St Thomas the Martyr, Oxford
(with Christ Church cathedral behind her)

Today is the feast of another in the long line of Anglo-Saxon royal nun-saints: St Frideswide, who died on 19 October in the year 727.  Frideswide is the patron of Oxford, both city and university, and her shrine is here in Christ Church Cathedral, which stands on the site of the medieval priory which bore her name.  In outline her story is a familiar one: as legend has it, she was the daughter of a Mercian king, who chose the religious life but was sought in marriage by a wicked king named Algar; she fled his advances to a forest near Binsey, where she discovered the treacle-well, and was hidden there until Algar was killed by falling off his horse just outside the city gates and breaking his neck.

There was a superstition in the Middle Ages which said that because of Algar's fate, no king had entered the city of Oxford from the time of Frideswide until Henry III defied the ban in 1263; this is not literally true, at least of the pre-Conquest kings, but I suppose it might be true of the post-Conquest ones (the royal palace of Beaumont, near where the Ashmolean now stands, was outside the city walls).  This part of the legend is an interesting counterpart to the stories of Norman barons fleeing St Etheldreda, and Cnut being so afraid of St Edith; why, you might ask yourself, were such noblemen supposed to be at risk from the supernatural powers of these dead saintly women?

Anyway, in honour of St Frideswide I thought I would post a Middle English verse account of her life.  It comes from the same stable as the jolly little Middle English life of St Benedict which I posted in July; they're both from the 14th-century collection of vernacular saints' lives known as the South English Legendary.  There are actually two versions of St Frideswide's life in that collection, and this is the shorter one (you can find the shorter one here and the longer one here).  I must warn you in starting: from an artistic point of view, this poem really isn't very good.  You won't hear me say that about most of the medieval texts I post here, because a) I only post things I think are good and b) I like to encourage people to see the best in medieval poems which are not generally thought to be worth much artistically; most of the short lyric poems I post here, for instance, are not considered the best of the genre, but I think they have a lot of merit and are sadly underrated by scholars.  That is not the case with this Life of St Frideswide!  It's not meant to be high art: it's a pacy, memorable tale, recounting the most important moments in Frideswide's life and not attempting to be particularly clever about it.  But it is quite fun.  To preserve that quality, I've put it into a modernised doggerel form below the ME text; the uneven metre and even some of the dodgy word order are also found in the original.  Enjoy! 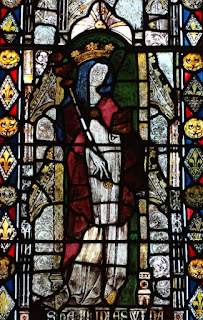 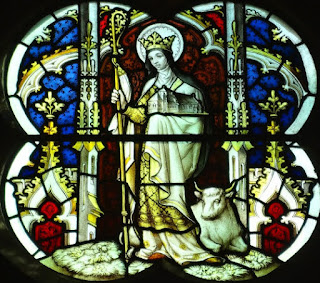 And now the translation (the interspersed images are from the Burne-Jones window in Christ Church Cathedral depicting the life of Frideswide):


Saint Frideswide, that holy maid, came from England;
At Oxford she was born, as I understand.
Her father was King Dydan, and Safrida was his queen -
These were her parents, who begot her them between.
Frideswide, their young daughter, they set to learning in her youth:
So well she sped that in six months she knew the Psalter through.
Most dearly was she loved, by high and by low;
All took great joy in her who ever did her know.
Of a rough hairshirt was her inmost clothing made;
The best food that she ate was herbs and barley-bread,
And the cold well water was her only drink;
These days a knight's daughter would scorn of such things think!

The maid asked her father to make her a nun
In the church of Saint Mary, which he had himself begun.
Her father was the first man who did that church begin
Which bears the name now of the maid, who lies enshrined within.
The king was glad of this child, who wanted a pure life:
At once he sent for the bishop, as fast as he could write,
Who was bishop of Lincoln then - Edgar was his name -
To make his daughter a nun; to him it was no shame!
The bishop at the king's request came then at once himself
And sheared her in the nunnery, with her companions twelve.

[sheared, i.e. had her hair ceremonially cut short - the female equivalent of the tonsure]


Then one night, when this maid was by herself alone,
In her bed, beside her sisters, sleeping every one,
The Devil took to hating her for her holy life,
And planned he would deceive her, by some trick he would devise.
He then appeared, to tempt her, in likeness of a man,
In precious clothes of beaten gold, and to speak he then began:
"My dearest girl," he said to her, "don't worry here too long:
It's time you were rewarded for the labour you have done.
I am the one you worship; pay heed to me now,
Honour me, and for your service your reward will be a crown."
The Fiend had there upon his head a crown of red gold;
Another he held out to that maid, if she him honour would.
"Away from me, you wicked fiend, with your promises!"
She signed the cross, and away he flew with noise and much distress. 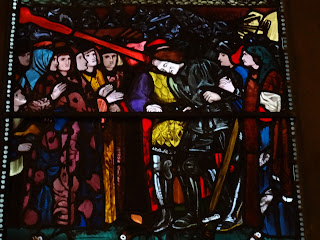 In this holy nunnery so long she lived there
That at last her father and mother both dead were.
Algar was the king who succeeded king Dydan;
He was chosen king at Oxford - a cruel and wicked man.
He sent at once for Frideswide, to have her as his wife.
She said she was betrothed to God, and would be all her life.
The promise she had made, she swore she'd never break;
If she did, she knew full well God would his vengeance take.
She said, "I would be a fool the King of Heaven to forsake,
And you would be another, if you did his handmaid take."
The messengers with their great strength would have seized her as one
And forced the maid against her will before the king to come;
But then all of them were suddenly struck blind,
And all at once they lost the power this holy maid to find!
The citizens of Oxford were sorely aghast,
And for these men to the holy maid they prayed at last,
That she through the grace of God might give them back their sight,
So that from there back to the king travel again they might.
At once they had their sight back, through her beseeching,
And from there they went, and told all this to the king.
The king became angry when he heard all this,
And in wrath he swore an oath he would seek her, iwis,
And he would have her.  Furiously he began to rave
And swore that her witchcraft would no more her save!

An angel to the holy maid appeared on that same night
And bid her flee as best she could the furious king's might.
The lady fled by night from her sisters all;
Only a few she took with her - two of them, no more.
To the Thames she went and found a boat waiting, by God's plan,
And therein she found an angel who took them to the land.
For dread of the king she fled that place, as God it did provide,
But dared not go to any town, nor in any house hide.
As best she might she hid herself in a wood called Binsey
Three winters in a cave she lived, where no one could her see.

A maiden who for seven years nothing could see
Came to her within the wood, and fell down upon her knee:
Her eyes the holy maiden washed with water in her hands
And as whole as any fish the maid again did stand.

[apparently 'as healthy as a fish' was a genuine Middle English saying.  That seems impossibly ridiculous, but it is true, and google suggests it exists in other languages today...] 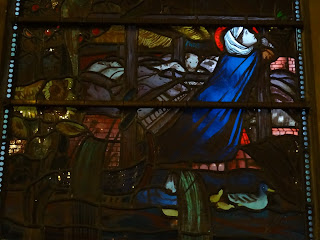 The king then came to Oxford, furious, almost mad,
And planned to do to the maiden something very bad.
As soon as he came to the city, he thought that he would fight
And seize this maiden Frideswide by strength, against the right.
He asked where she had gone, and was told that she had fled:
That she in the wood of Binsey had in secret hid.
The king rode towards the wood with hawks and hunting-hounds,
To seek the holy maid and get her in his hands.
When the maiden heard this, she soon began to flee
To Oxford very secretly, where no one could her see;
But as she fled they spotted her, and pursued her very fast;
After her they all galloped, the king was not the last.
The maiden escaped into the town, by God's grace.
The king's horse stumbled outside the gate in a level place
And fell, and broke the king's neck; and that was all he won!
Then none of his men dared within the city come.
The maiden remained within in peace, protected from her foe;
Glad was anyone who could speak with her or to her go.
Of her holy life they all spoke, far and near,
Throughout all England was no one thought her peer.

A very great wonder happened another day,
To a fisherman who, with his friends, in a boat sleeping lay.
He began to rave when he awoke from sleep,
And there among his companions he madly began to leap,
So that he seized one of his friends and suddenly him slew,
And when he had killed him, with his teeth he began to chew.
All those who could reach him, on him they set their hands,
And barely, with much labour, they got him tied and bound.
All their thought was to take the man to that holy maid
That she might cure the man possessed, if she for him prayed.
The maid marked the cross on the top of his head;
The bound body fell down, as if it were dead.
The maid had him unbound at once, in every wise,
And bid him, in God's name, whole and sound to rise.
Whole and sound the man arose and praised God in heaven
And the maid who released him from that wicked devil.

As she walked one day in the town, a leper she did meet;
At her feet the leper fell, and humbly did her greet.
He prayed to the lady, that her kiss might him heal;
She kissed him, and he was cured, just as God willed.
During her life it was well-known, the miracles she did,
And also after her death; they ought not to be hid!
She left this world on the morn that followed St Luke's day,
May God bring us to the bliss he prepared for that maid!  Amen. 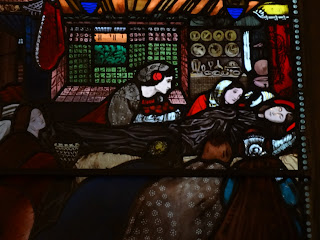