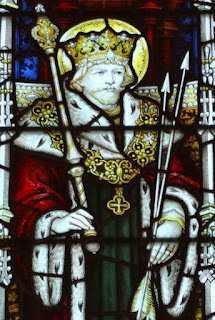 This part of November is just one good saint's day after another, and today belongs to Edmund, King of East Anglia, killed by a Viking army on this day in 869.  The earliest account of Edmund was written just over a hundred years after his death, based on a chain of oral transmission which went like this:

Abbo's Passio was soon translated into English by Ælfric, and you can read a modern translation of that version here. Ælfric's Life tells how a Viking fleet led by Ivar (Hinguar) attacks Edmund's kingdom and demands that Edmund submit to him. Edmund will not submit but does not have the forces to resist, so he decides to face death alongside his people rather than renounce Christ. The Vikings capture and kill him, shooting him full of arrows and cutting off his head. The most memorable detail is that after Edmund's head has been cut off and hidden it is protected by a kindly wolf; it's eventually discovered by his friends when it cries out 'Here! Here!' as the search-party goes by. The head is restored to the body, and he is buried.

From the beginning St Edmund was a very popular saint in England, especially in East Anglia, and he continues to be so; on visits to the area I've gleefully collected depictions of him ranging from the medieval to the extremely modern, and have posted about them here and here. The early stories of Edmund are fairly sober - although Ælfric acknowledges that he has heard much 'popular talk' about Edmund's miracles - but from the eleventh century onwards legends about him started to take on a fabulous life of their own, aided by the monks of Bury St Edmunds, of course. Stories developed about his parentage (such as that he was born at Nuremberg as the son of a German king), about his virtuous youth (supposedly he spent a year memorising psalms in a tower in Hunstanton), about various clever tricks he used to defeat the Vikings in battles before his death, and about how his ghost was responsible for the violent death of Svein Forkbeard, plus various other local superstitions (here for instance is a very late one from Suffolk).  This is all legend, with very little basis in fact, but the number and variety of stories suggests just how popular Edmund was - people were talking about him.

One interesting thing about St Edmund is that although he had been killed trying to resist a Viking invasion, the successful invaders enthusiastically embraced him as a saint.  The invasion in question wasn't a smash-and-grab Viking raid; many of the pagan Danes involved in the conquest of East Anglia settled in England, quickly accepted Christianity, married and had children.  They became landowners, farmers and churchmen - tradition said that the saintly bishop Oswald of Worcester, for one, had a Viking grandfather who was in the army which killed Edmund.  So how did the descendants of the Danes deal with their ancestors' actions?  Partly by choosing to honour the memory of St Edmund as a martyr for the Christian faith (most notably by issuing coins bearing his name), and partly by telling their own stories about why the Vikings came to England.  A number of complex and inventive legends survive in East Anglian histories which seem to tell the story from the Danish point of view.  One claims, for instance, that the leaders of the army, Ivar and Ubba, originally came to England to avenge their father Ragnar Lothbrok, who had been unjustly murdered by one of Edmund's huntsmen.  Another story says that Ivar and Ubba came because their father taunted them that King Edmund was braver and more successful than they were, so they decided to prove him wrong by invading Edmund's kingdom!  These stories don't exactly justify Edmund's death, but they find a way to explain it that doesn't cast the Danes in such a bad light.  You can imagine Danish settlers telling each other these stories, explaining how and why their ancestors came to England, as an alternative to legends about how wicked pagan Vikings indiscriminately raided and killed.  It's a fascinating glimpse into a group of settlers making sense of their own history.

These legends, first recorded in the twelfth century, found their way into later versions of Edmund's story, and by the fifteenth century some formed part of the 'official' version of the tale being told at Bury St Edmunds.  By this time the Viking army had been converted into the standard pagan enemies of romance, but the core of the story, especially of Edmund's martyrdom, is unchanged.  Let's explore this story through some images which show you what Edmund's legend looked like to fifteenth-century eyes; these are taken from two manuscripts of John Lydgate's Life of Edmund (British Library Yates Thompson 47 and Harley 2278).

So, according to this version of the story, after Edmund has been crowned king, an innocent Danish stranger named Lothbrok is shipwrecked on the East Anglian coast and turns up at Edmund's court: 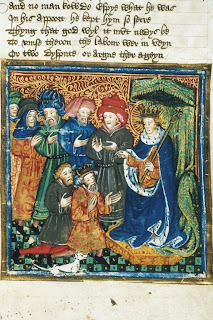 (Note the little dog.  The dog is important.) 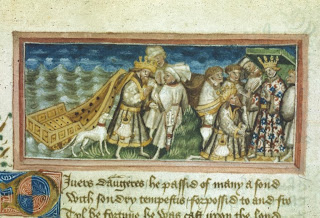 Enamoured of the elegant lifestyle he observes at Edmund's court, Lothbrok asks to stay and learn courtly manners.  He goes around minding his own business, learning hunting and hawking, until Edmund's huntsman Bern, who is supposed to be teaching him courtly behaviour, grows jealous of him.  Bern secretly murders him while they're out hunting one day, and hides the body: 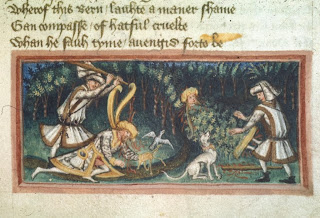 But Lothbrok's faithful dog guards the body and leads someone to find where it's hidden.  (Note that this duplicates the motif of the wolf guarding Edmund's body in the earlier form of the legend.) 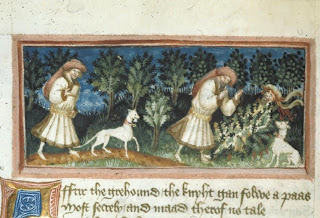 Clever little dog!  Thus Bern's crime is discovered, and he is put on trial and then set out adrift at sea as a punishment: 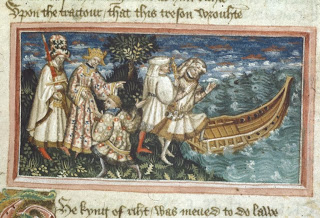 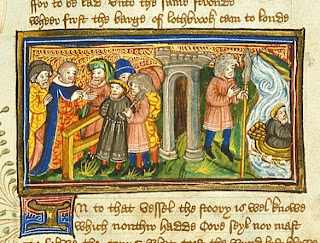 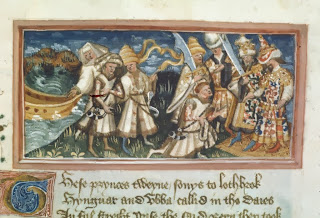 (Denmark as you've never seen it before!  It's no Borgen...)

The odd thing about this whole story of 'Bern the huntsman' is that Bern (Björn) is actually the name of one of Ragnar Lothbrok's sons in early English and in Scandinavian tradition, so something has got interestingly conflated here.  But in any case: Inguar and Ubbe recognise the boat in which Bern arrives as the one in which their father Lothbrok set out.  When they ask what's happened to their father, Bern lies and tells them that King Edmund has had Lothbrok put to death.  They decide to avenge Lothbrok by invading East Anglia, so they sail to England: 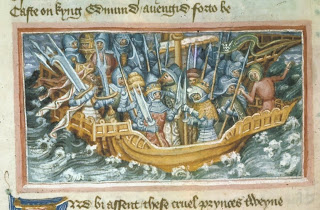 They pillage and burn: 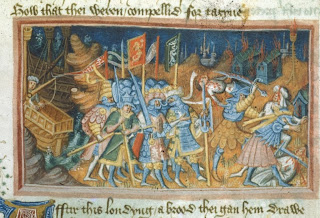 Word comes to King Edmund, and he takes on the Danes in battle: 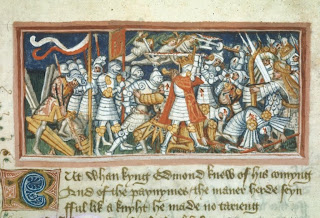 He triumphs (there are angels on his side) but the Danes send him a message offering peace if he will agree to renounce Christ and worship their gods.  Edmund discusses this with his counsellors: 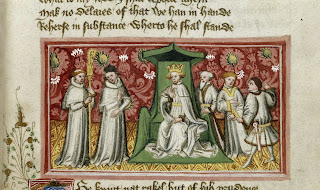 But of course he will not renounce his faith, and chooses instead to give up his life for his people.  The Danes besiege and capture him, and he suffers martyrdom in the famous way: 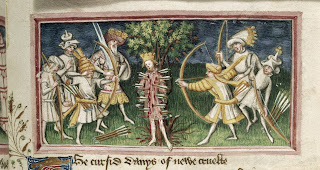 Here are some more depictions of the martyrdom, to show just how popular this scene was: 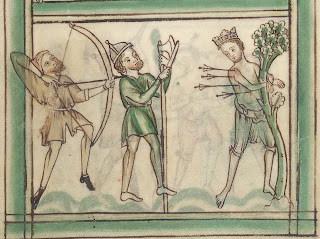 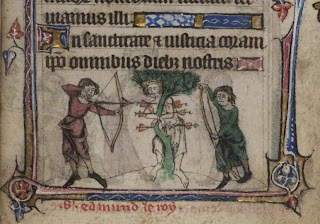 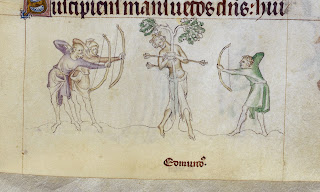 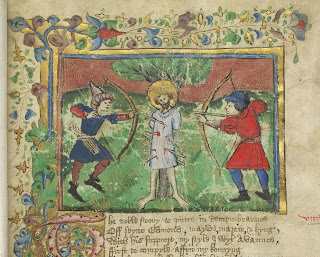 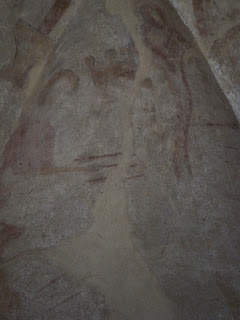 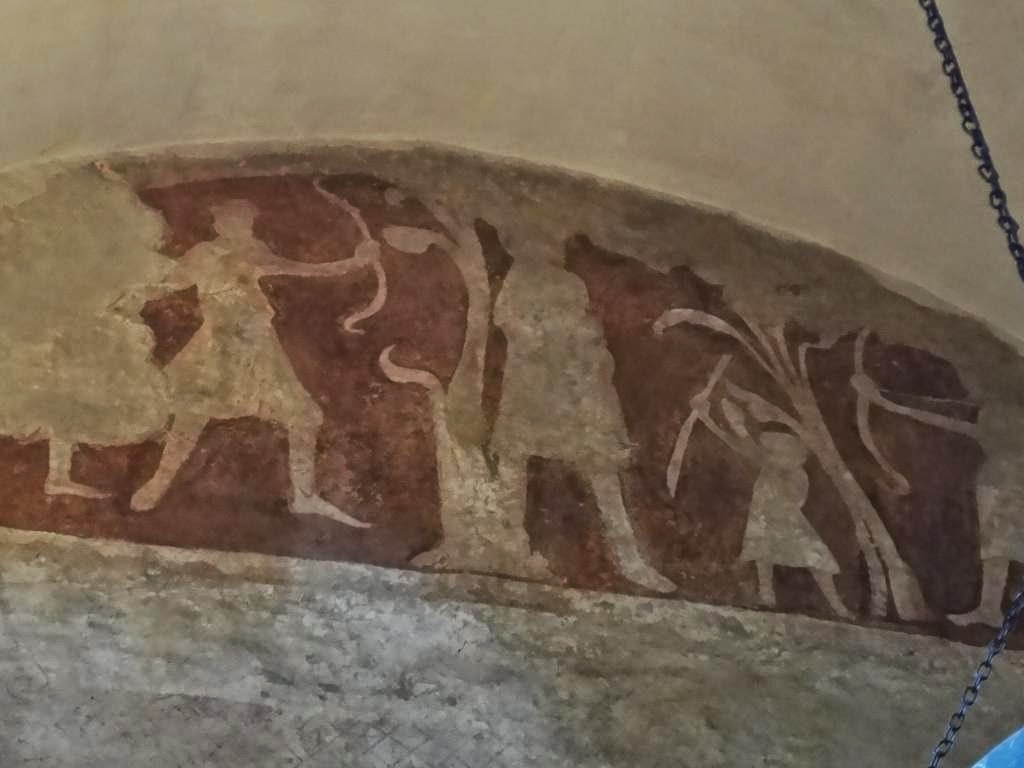 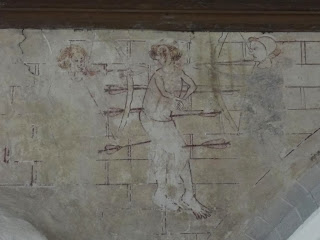 After death Edmund's head is cut off and hidden (as in the earliest form of the legend), and guarded by a wolf: 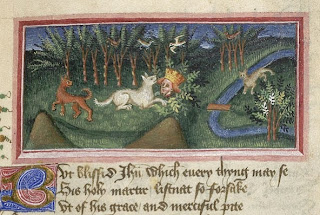 Eventually it is discovered: 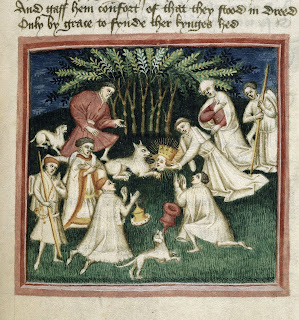 In the other manuscript the head is shown shouting 'heer! heer!': 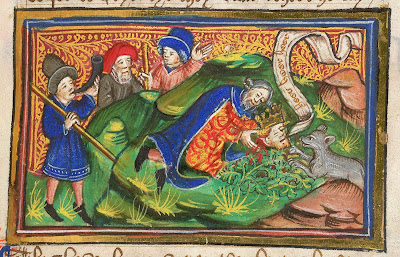 The head was then returned to the body, and miraculously reattached itself: 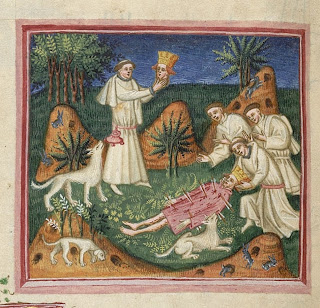 And here Edmund is buried: 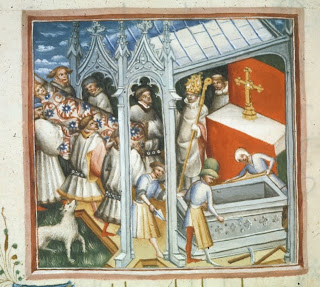 These expensive and lavishly illustrated manuscripts show how highly the monks of Bury St Edmunds valued their patron's legend in the fifteenth century.  But he was widely venerated beyond Bury, and so to conclude here's a fifteenth-century English carol in honour of Edmund. This comes from the manuscript Sloane 2593, along with some other now-famous Christmas carols.  I wasn't really aware until this year how many saints were the subject of their own medieval vernacular songs, but between St Francis, Thomas Becket, St George, St Nicholas, and now St Edmund, there's no shortage!  This is the only extant carol in honour of St Edmund, but there's some surviving liturgical music about him which has received some scholarly attention (for instance here.)  The Latin phrase in the refrain of this carol is the first line of the antiphon for St Edmund’s day.

Synge we now, all and sum,
'Ave rex gentis Anglorum.'

A newe song I wil begynne
Of Kyng Edmund, that was so fre,
How he deyid withoute synne,
And bowndyn his body was to a tre.

With arwys scharpe they gunne hym prykke;
For non rewthe wold they lete;
As dropys of reyn they comyn thikke,
And every arwe with other gan mete.

And his hed also thei of smette;
Among the breres thei it kest;
A wolf it kepte withouten lette;
A blynd man fond it at the last.

Prey we to that worthi kyng,
That sufferid ded this same day,
He saf us, bothe eld and yyng,
And scheld us fro the fendes fray.

A new song I will begin of King Edmund, who was so noble: how he died without sin, and his body was bound to a tree.

With arrows sharp they began to prick him; they would not cease for any pity. The darts came thick as drops of rain, so close that each arrow touched another.

And his head they cut off, among the thorns they cast it; a wolf guarded it, truly, and a blind man found it in the end.

Let us pray to that worthy king, who suffered death this very day; may he guard us, both old and young, and shield us from the fiend's affray.]
Posted by Clerk of Oxford at 2:48 pm

That was really interesting, thank you,

Yes -- fascinating about the early colonial story-telling! Thanks!

It's actually part of my thesis, so I agree, it's very interesting! :D

Hi there
Fascinating entry on St Edmund- the patron saint of my home town!
I wonder if you could tell me the source of the illustrations on Edmund- particularly the ones with his head and the wolf? We are a non profit group creating a walks booklet for Bury st Edmunds- part of which goes past the Wolf legend statue and wanted to illustrate this. I would love to be able to use one of these illustrations but want to be sure we are not infringing any copyright issues. I appreciate your help in this. Sarah

The iconography is very similar to S. Sebastian (although rather more arrows!).

Is this an example of putting a native Saint against an imported one?

Yes, St Sebastian was certainly an influence! The Anglo-Saxon hagiographers actually compare Edmund to St Sebastian - perhaps because they didn't really know how Edmund had died, but thought Sebastian was a worthy model to imitate.