In Search of St Margaret

St Margaret of Scotland - princess, exile, reluctant wife, mother of kings - is one of my favourite medieval saints, and I wrote about the early sources for her life here. 16 November is the anniversary of her death in 1093, which came just days after she learned her husband and eldest son had been killed in battle. Dunfermline, where she was buried, is a bit far for me to go in her honour, but if you were looking for a pilgrimage destination for Margaret in England you could do worse than Romsey Abbey, in Hampshire. Although she was born abroad Margaret did spend a decade of her youth living in England, from 1057-1068, between the ages of about ten and twenty. We don't know exactly where she was in that time - whether she was at the royal court or being educated at a nunnery, somewhere like Wilton Abbey or Romsey, where royal women were often brought up.  (I discussed this in relation to Wilton recently). The latter possibility seems most likely, especially given her devout habits in later life, her high regard for learning, and the story that she wanted to be a nun before her marriage to Malcolm.

Her sister Christina did become a nun, and probably abbess, at Romsey, in c.1086. Nunneries were the safest places for English women in the aftermath of the Norman Conquest: anti-Norman rebellions from the English lasted well into the 1070s, and Margaret and Christina's brother Edgar was in the thick of them. Romsey had been founded in 907 by the granddaughter of Alfred the Great, and always had strong links with the West Saxon royal house, partly as a royal foundation and partly because it's close to what was then England's de facto capital city, Winchester. In c.960 King Edgar refounded it as a Benedictine house with his stepdaughter Ethelflaeda as abbess, and she became one of its patron saints. So it's not a great surprise to find Christina, granddaughter of Edmund Ironside, ending up there after the Norman Conquest, nor to find her educating Margaret of Scotland's two daughters there. 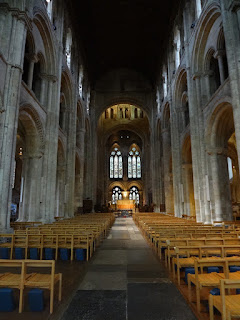 We can't be completely certain, but it seems a reasonable possibility that Margaret and Malcolm visited their daughters while they were at Romsey. (The town museum was completely certain, and I'd like to be convinced, but should probably exercise some scholarly caution!) We do know that Malcolm at least saw his daughter Matilda after she had been living at the nunnery, because he violently objected to her wearing a nun's veil. The present building, a splendid church, was built in the twelfth century, so was not there when they visited, but Romsey has some unusual and precious survivals of its Saxon history. This is the most extraordinary: 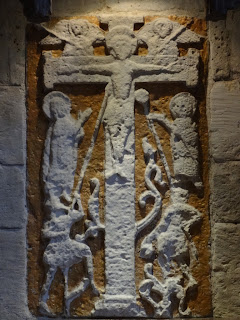 It's a Saxon crucifixion scene, dating to the mid-tenth-century, and so perhaps a gift from King Edgar at the time of the refoundation. It's incredibly well-preserved. The cross is sprouting tendrils of fresh growth, as medieval rood-trees often do; the way the four straight lines above and below (the angels' staves, Longinus' spear, and the sponge of vinegar) converge on Christ, like radiating sunbeams, is just wonderful. It was originally adorned with gold and jewels, and must always have been one of the abbey's greatest treasures. If St Margaret came here, she would certainly have seen it.

The other Saxon survival is a life-size crucifix: 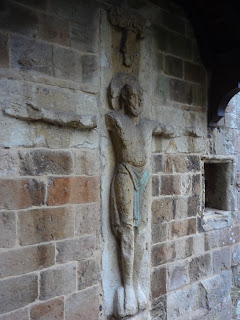 This is on the outside of the church, next to the door by which the nuns would have entered from the cloisters. Anglo-Saxon crucifixes were often life-size and almost miraculously life-like, as I've written about before; this one probably would have been crowned and perhaps decorated. Pious Anglo-Saxons interacted with these figures as if with human beings: Cnut was supposed to have humbly presented his own golden crown to a life-size Christ figure at nearby Winchester, Harold Godwinson gained the sympathy of one at Waltham Abbey before the Battle of Hastings, and there are various stories of these figures speaking or coming to life to intervene in human affairs. It's easy to see why, when you stand below the Romsey figure and look up into its face. The 'hand of God' descending from above is utterly characteristic of an Anglo-Saxon Crucifixion scene; it's very touching to recognise something so familiar from tiny manuscript illustrations and then to see it here, huge and impressive certainly, but weatherbeaten and eroding - somehow more impressive because more frail. This dates to c.1025, the reign of Cnut; this, too, would have been here when Abbess Christina was - and perhaps St Margaret saw it. 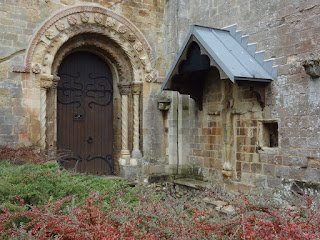 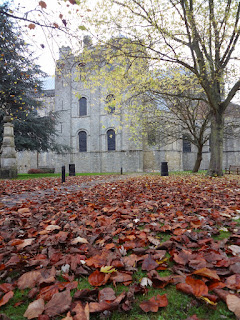 The dreary November day I went to Romsey didn't have particularly good weather for photography, so I don't have any more photographs to share. But I couldn't resist taking a picture of this memorial, because it so wonderfully illustrates the ironies of history: 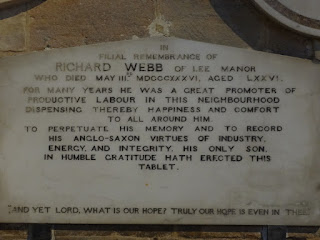 With its associations with Christina and St Margaret, Romsey recalls more than anywhere else the nadir of 'Anglo-Saxon' fortunes in England; that the word ever could have come to be used as a positive virtue is in part thanks to Margaret, and to Romsey itself. By the marriage of Margaret's Romsey-educated daughter Matilda (or Edith, as she was christened, in honour of her English ancestors) to Henry I, the wounds of the Norman Conquest slowly began to be healed.
Posted by Clerk of Oxford at 1:38 pm

How have I missed seeing this blog for so long? I found it while searching for medieval Christmas texts. The breadth and depth of your intellectual musings is just stunning. I spent three years ('83-'86) in the Midlands courtesy of the US Air Force and never had enough time to appreciate my historical surrounds. Your blog is a precious gem amidst the rubble that is the internet. I can't thank you for your offerings. I will be your loyal reader (if not a Loyalist...)

What an incredibly nice thing to say! Thank you so much.

... and you thought you had little to offer ... on the contrary, we read each word and value them immensely