At this time of year I get lots of hits from people looking for translations of the words of medieval Christmas carols. For some reason, such information is not easy to come by on the internet (and that which is available is not always accurate), so I like to think of it as a public service to post accurate translations here. It makes me very happy that medieval carols form a regular part of the Christmas repertoire, but it's nicer still if people understand what they're singing!

And thus, today's post. Someone was searching here yesterday for the words of 'Illuminare Jerusalem', which I've never posted about, so today I'll correct that; it also happens to be appropriate for the Feast of Christ the King, because as well as being a Nativity (and Epiphany) poem it's also about Christ's kingship of earth and heaven. Christ the King is emphatically not a medieval feast - it's less than a century old - but of course the imagery of Christ as King was very popular in the Middle Ages, as 'Illuminare Jerusalem' perfectly exemplifies.

'Illuminare Jerusalem' is the modern name given to a poem written in the sixteenth century, which was set to music by Judith Weir for the choir of King's College, Cambridge, in 1985:

2. With angellis licht in legionis
Thow art illumynit all about.
Thre kingis of strenge regionis
To the ar cumin with lusty rout,
All drest with dyamantis but dout,
Reverst with gold in every hem,
Sounding attonis with a schout,
Illuminare, Jerusalem. 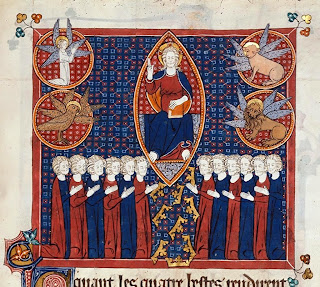 1. Jerusalem, rejoice for joy:
Jesus, the star of greatest beauty
Is risen in thee as righteous king
From darkness to illumine thee.
With glorious sound of angels' glee [rejoicing, or possibly music]
Thy prince is born in Bethlehem
Who shall make thee from slavery free.
Illuminare, Jerusalem.

2. With the light of angels' legions
Thou art illumined all about;
Three kings from far regions
Have come to thee in a lusty rout; [splendid company]
All adorned with diamonds, without a doubt,
And trimmed with gold on every hem,
Crying together with one shout,
Illuminare, Jerusalem.

3. The raging tyrant who reigned over thee
Herod, is exiled with his offspring;
He possessed the land of Judah unjustly,
And risen is now thy rightful king.
Because he is so mighty and worthy,
When his glorious name is spoken
Heaven, earth and hell bow;
Illuminare, Jerusalem.

4. All elements knew his coming:
The air perceived him by a star;
The water when he walked dry-shod upon it;
The earth which trembled and was split open;
The sun when it gave no light;
The cross when it was treated with contempt;
The stones when they were reft in pieces;
Illuminare, Jerusalem.

5. The dead knew him, who were raised upright,
Who for a long time had lain under the earth;
The crippled and blind declared the might
Of him who healed so many hundreds of them.
Nature knew him, and greatly marvelled
When he was born of a virgin without blemish;
Hell [knew him] when their gates were broken asunder.
Illuminare, Jerusalem. 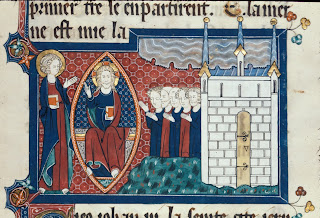 There's something about this poem I really love - it glitters with light and sings with thunderous joy. The phrase 'illuminare, Jerusalem' is from Isaiah 60:1: 'Surge, illuminare, Jerusalem, quia venit lumen tuum, et gloria Domini super te orta est', 'Arise, shine, Jerusalem, for thy light is come, and the glory of the Lord is risen upon thee.' The phrase is also used in the refrain of an English carol in BL MS. Egerton 3307, which goes:

(Isn't it strange that to call Christ a 'duke' sounds a little odd, but 'king' and 'lord' are just fine?)  The first two verses of 'Illuminare Jerusalem' are influenced by that Isaiah passage, which also prophesies that 'the Gentiles shall come to thy light, and kings to the brightness of thy rising': these verses focus on Epiphany imagery, the coming of Christ as the rising of a star, illuminating the darkness of his people, and the homage paid to him by the three kings, 'a lusty rout' adorned with diamonds and gold on every hem!  The third verse contrasts Christ the rightful king with Herod, a type of the tyrant and usurper, and then the poem goes on to describe how all elements in the universe acknowledged (or recognised - knew can be both) Christ's coming: the air knew him by the appearance of the star, the water knew him when he walked upon it, the sun knew him when it was darkened at the Crucifixion, Hell when he broke it open, Nature when he was born in defiance of natural generation... etc.

The poem is anonymous, and is preserved in one manuscript source: the Bannatyne Manuscript (National Library of Scotland, Advocates MS. 1.1.6), a collection of hundreds of poems which was compiled by a young Edinburgh merchant, George Bannatyne (1545-1608). He copied it all out, he tells us in the manuscript, in the last three months of 1568, when Edinburgh was afflicted by plague and no one could go about their usual work ('in tyme of pest/Quhen we fra labor was compeld to rest'). Endearingly, he describes the book on the first page as 'Ane most Godlie, mirrie and lustie Rapsodie, maide be sundrie learned Scots poets and written be George Bannatyne in the tyme of hys youth' - at that time he was 23 years old. Unlike many medieval miscellanies, Bannatyne's manuscript organises the poems by subject-matter - religious subjects like the Nativity, moral counsel (of the 'don't trust to riches' variety, or 'preserve your health by eating in moderation' - that kind of thing), social satire, love poems, and fables. That might sound obvious to us, accustomed to modern anthologies, but it's unusual for the time - it suggests young Bannatyne had put quite a bit of thought into organising his collection.

In the manuscript 'Illuminare Jerusalem' follows on directly from William Dunbar's 'Rorate coeli', another Nativity poem which is somewhat along the same lines, but even better - Dunbar is a wonderful poet, and 'Rorate coeli' (which is also not entirely unfit for Advent!) is very much worth reading.  This poem by Dunbar on the Resurrection also appears in the Bannatyne MS., along with many others by him. 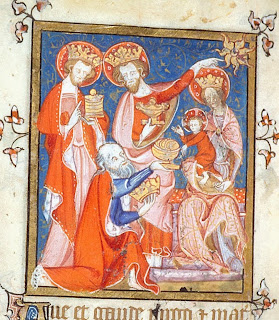