I have a special fondness for St Ælfheah, Archbishop of Canterbury, who was murdered by Vikings on this day in 1012.  Celebrating the millennial anniversary of his death last year, I posted this account of his death, written by Osbern, a monk at Canterbury, in the late eleventh century, and in the past I've also provided sources which tell the story from the English perspective, the Viking perspective, and the perspective of St Anselm and the Canterbury monks looking back after an interval of sixty years.  I only recently learned that there's also a Middle English life of Ælfheah in the South English Legendary, which adds nothing to our knowledge of Ælfheah (it's too late and derivative for that) but is an interesting addition to the picture of his later veneration at Canterbury and beyond.

I think my favourite thing about this text - as with much Middle English hagiography - is that it gives a slightly elided form of the saint's name, so that Ælfheah becomes 'Alphe'.  This makes me want to think of him as St Alfie, and forms an addition to my list of familiar saint's names...

It begins by describing his early life, and we pick it up when he becomes Archbishop of Canterbury in 1006.  (A translation of the Middle English follows after the picture below.) 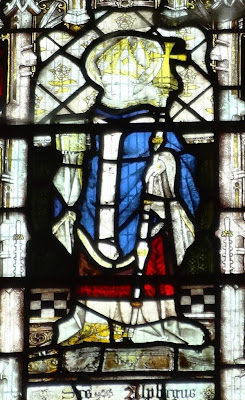 St Alphege in 15th-century glass from All Souls, Oxford

This extract draws on my favourite part of Osbern's story about Ælfheah's death - the moment when he's lost in the marsh, and cries out: "The prison is behind me, the river is in front of me, shadows are all about me and their creator is at hand".  This is all most likely Osbern's fertile imagination (for how would anyone know what Ælfheah did and said while alone?) but this is one of Osbern's attractive qualities as a writer - he's not the most accurate or scrupulous historian, but he is fully and personally engaged with the story he tells.  (The Middle English poet, I think we can assume, is not).  Osbern deeply loved St Dunstan, and his work on Dunstan is enlivened and made real by the strength of that personal love - even though William of Malmesbury complained that he'd got the square footage of Dunstan's monastic cell wrong.  With St Ælfheah, this tale about the elderly archbishop being led out of prison by the devil, and wandering alone in the dark and shadowy marshes around enemy-occupied Greenwich, gives a remarkably dramatic, almost spine-tingling quality to the story - if being pelted with ox-bones by Vikings wasn't quite dramatic enough for you.


Here's a rough translation of this really rather dreadful poetry (I've corrected the name Kirkel to Þirkel since it's meant for Thorkell the Tall):

Archbishop he was made a thousand years, aright,
And six after our Lord within his mother did alight,
And archbishop of Canterbury six years he was and more;
No tongue may tell all his wisdom or his lore.
Then in the seventh year after he there came
The wicked prince of Denmark with great power he came
And they arrived here in England as they had often done -
For the Danes and men of England have seldom been at one.
When this wicked prince and his men to England came
They burned and robbed all to the ground and noblemen they seized.
The king Atheldred was then king of England;
So simple he was and mild that he would not against them stand.
He was brother to Saint Edward, who his mother with outrage
Had martyred for [Atheldred's] love to win him the heritage.
And he was Saint Edward's father who king was later made,
Who at Westminster was buried and in a shrine was laid.
The king Atheldred was so mild, and had hard troubles in his life
(Because his brother for his kingdom lost his life)
That he took but little thought for the world's affairs:
When he was told of any wars, he gave it little care.
With battle he would have nothing to do, but always kept still
And so the Danes in England had all their will.
Þyrkel was the prince's name who then led the Danes
Hither he came most fiercely and brought but little peace:
Everywhere he went around he brought them all to shame.
His brother was leader of his host - Edrik was his name.
He let his brother Edrik to Canterbury fare
And slay and rob all those they met and the streets make bare,
But the men of Canterbury had been made aware
So that upon the attacker's head they brought the greatest care.
They showed that they were strong of heart and slew him anon
And to the ground slew all his men that they could overcome.
Then to Þirkel the prince the tidings soon were told;
That his brother was slain caused him the greatest dole.
To Canterbury he went at once and besieged the town so fast.
The townsmen, though they hardy were, were somewhat aghast,
So that Þirkil the wicked prince defeated them at last.
Their strategies and their strength all down below he cast.
To nothing he burned up all the town and to ground the people slew.
The archbishop St Alphe was sorry when this he knew;
He went out forth most boldly in our Lord's name
And sought peace for the poor men who had been brought to shame
And offered them his own life to be given in their stead.
When these wicked men had seized him, they were joyful indeed;
They first took this holy man and then they slew to ground
His monks and his other men, all that they found.
The church of Canterbury also they robbed at the last,
And after they took this holy man and bound him fast,
And led him to Greenwich and there they held him long
Half a year and a little more in prison very strong.
Three miles to the east of London the town of Greenwich stands;
So long he lay in prison there, he was no more like a man.

As this holy man in prison lay, as he long had done,
On the Friday night in Easter week the devil to him came.
"Alphe," he said, "be thou well! I am come to thee,
An angel I am of heaven, sent by our Lord to thee.
He is not pleased, he sends thee word, that thou in prison should be
And now to save England he wishes you to flee.
For holier than St Peter to be, you should wish it not,
Who came out of prison when the angel him brought;
And St Paul in a basket escaped, too,
Over a wall when the Jews his death wanted to do;
And our Lord went out of the temple in secrecy alone
To flee death, when the Jews said they would him stone.
Holier than our Lord himself it seems you wish to be!
And so, as he has sent you word, from here you now must flee."
This holy man believed him, that our Lord him thither sent,
And with him out of prison at dead of night he went,
So that the devil led him forth through many a foul marsh...

He led far away this blessed man and with sorrow dragged him around,
At last he left him standing in a horrible watery ground.
He went forth on his wicked way, none knows where he might go;
Shame to any guide who treats a good man so!
When the good man realised that it had been the fiend
He made grief and sorrow indeed, without any end.
He went deep into the water; "Lord," he said, "alas!
That I should now, in my old age, fall in a sinful case!
Lord, why hast thou me forsaken, more now than before,
That I should be here all alone, in my old age forlorn!
This strong river is before me, and the gaolhouse behind,
And darkness is all about me, that I no way can find;
And he who is master of darkness has me here brought;
Have mercy on me, my sweet Lord, for help myself I cannot!"
The sorrow that St Alphe made no tongue tell can or may
But our Lord thought yet upon him, before that it was day:
For an angel came to him, in our Lord's name.
"Thou fool," he said, "Why didst thou go with him who dost thou shame?
Who has had envy to thee, ever since that thou wast born
And now has done such shame to thee, as he planned long before...
To prison go at once again and do not from there flee,
For thou shalt, for the love of God, tomorrow martyred be."

[He goes back to the prison, where he is further tortured.]

The next day in the morning, on the Saturday
As it fell in Easter week, St Dunstan came there
From heaven to this holy man and greeted him so fair:
"Alphe," he said, "our sweet Lord sends thee greeting by me,
And says that a noble crown he has prepared for thee.
Be steadfast, for this one day shall be thy day of pain
And then the next day of joy shall last without end."
As these two holy men together thus spoke
The fetters he was bound with, all at once they broke,
And his wounds were healed so that not one remained.

[His captors decide to kill him, afraid he is arousing public sympathy.]

They led him forth outside the town and did to him much shame
And struck him with hard stones, as St Stephen was slain;
And when he was near his death and almost martyred so
One who was his godson more shame would to him do:
He smote him with an axe in the head to the ground.
Thus he left at once this life, and died in a stound [a short while];
And in this manner martyred was in our Lord's name
For the love of England which had been brought to shame.

Some time later his body is recovered and his sanctity proved by miracles, and the Danes are punished for their misdeeds. Except for 'punished for their misdeeds' read 'they won lots of battles, conquered the country, and ruled England successfully for twenty years'. Oops, sorry - that's my love of Cnut coming through... ;) The Life tells of the removal of Alphege's remains to Canterbury (though it doesn't mention Cnut's involvement; compare Osbern's version here), and concludes:

Now pray we to our Lord St Alphe, who thus brought his life to end,
That we may through his prayers to the joy of heaven wend.
Posted by Clerk of Oxford at 2:02 pm