A visit to Greyfriars, Canterbury (and a Regina Caeli) 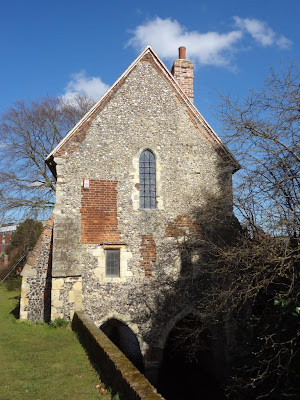 Every Easter I seem to find a new corner of medieval Canterbury which had previously escaped my eye, despite the fact that I've known the city all my life; last year it was St Martin's and the ruins of St Augustine's Abbey, and this week I visited the remains of Greyfriars, hidden away in the heart of the city. Greyfriars was the home of the Franciscans in Canterbury, and in fact it was the first Franciscan house in England, founded in 1224 (two years before St Francis' death). 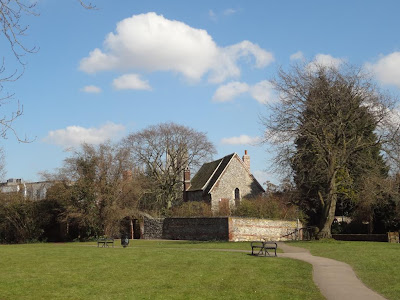 Only one building of Greyfriars survives, surrounded by a garden, and another part of the site is now a public park. The building is a little tricky to find; I knew exactly where it was, but not how to get to it! I was able to see it from a distance, across the sleepy, weed-filled River Stour: 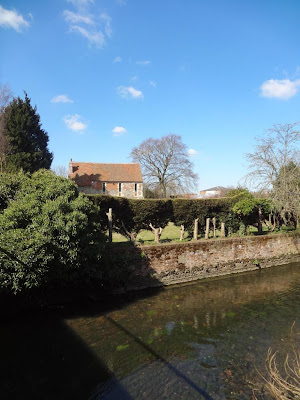 But when I got closer I found myself in the park, and on the other side of an unbroken wall from the place I was seeking: 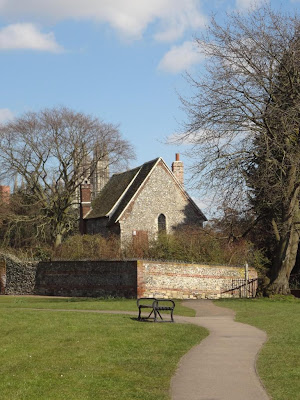 That wall baffled me, and I couldn't see how to get around it; climbing it seemed a bad idea! I proceeded to take the very longest way round you possibly could, but eventually I wandered down what looked like a possible lane (there was a sign, but it was politely unassuming) and found myself on the other side of the mysterious wall. It was worth the circuitous route - and Canterbury is the place for pilgrimages, after all. 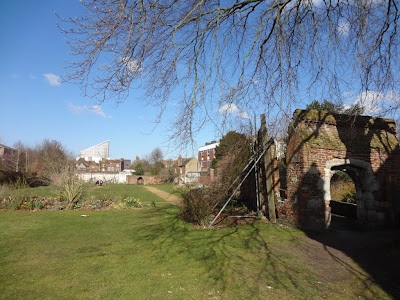 This bare space of ground was once a great religious house, and a complex of sizeable buildings. The first Franciscans who arrived in England, landing at Dover on September 10, 1224, were a party of nine led by Agnellus of Pisa. They begged their way to Canterbury, where they were put up by the monks of the cathedral priory, and they were eventually given a small piece of land near this site, behind the Poor Priests' Hospital in the centre of the city. An account of their coming was written by the friar Thomas of Eccleston a few decades later, and you can read a translation of it here. It's an interesting text, partly because Thomas talks about each individual member of the group, giving their name, origin and a little detail about each one. So, for instance, he says of William of Esseby, a young man of English birth, that he was notably humble and obedient in nature, and when asked if he would wanted to join the party travelling to England, replied that "he did not know". His superior was puzzled at this answer, until William explained: "his will was not his own but the Minister's, and so whatever the Minister willed, he willed." 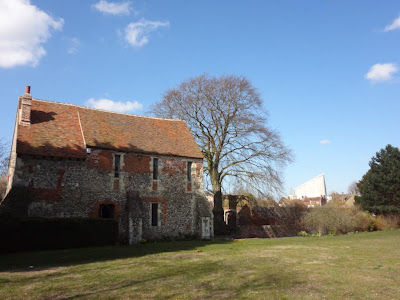 Such details bring this quiet place alive. This piece of land, between two branches of the river, is known as Binnewith Island (the name means 'in-between bit', at my best guess), and the one surviving building - which was probably the guesthouse - stands right on top of the river. 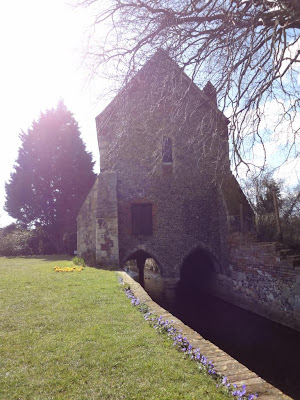 It's thoroughly enchanting - there's nothing like a medieval ruin on a bright spring day! We've not had much more than a rumour of spring here yet, but the crocuses and daffodils were out along the riverbank, and ducks were dabbling around underneath the arches ('As if the Magician / Sent ducks on a mission / With news from beyond...') 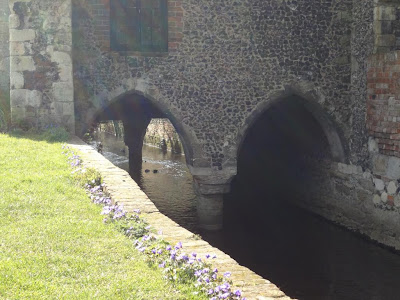 Against an ancient brick wall, the blossom was beginning to 'spring and spray': 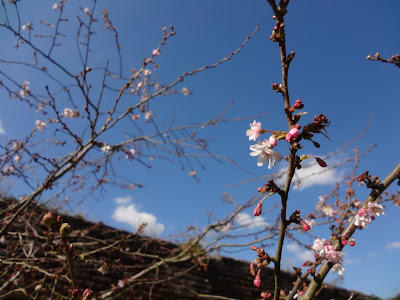 The walls are in a rather tumbledown state, but they're all the more picturesque for that. 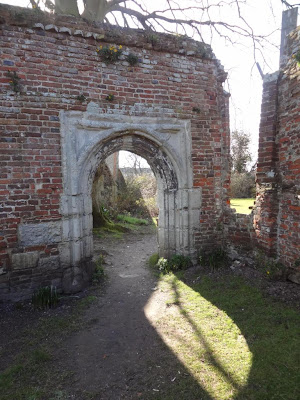 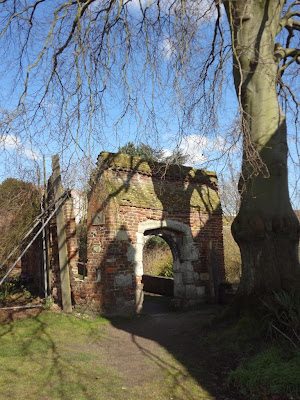 To return to the story: four friars of the first party continued on to London, and five remained behind to establish a house in Canterbury; they soon had houses in London, Oxford and Northampton as well as here in Kent. One piece of evidence for the early influence of the Franciscans in Kent is the mid-thirteenth-century wall-painting of St Francis in the church at Doddington, some fifteen miles west of Canterbury. I find that wall-painting fascinating - the idea of the friars telling the story of Francis in this little village, and suggesting, or encouraging, or executing the painting of this brand-new saint, dressed in the habit which was still new and unfamiliar to English eyes, gives a vivid glimpse into what it was like to be present at a particular moment in history. 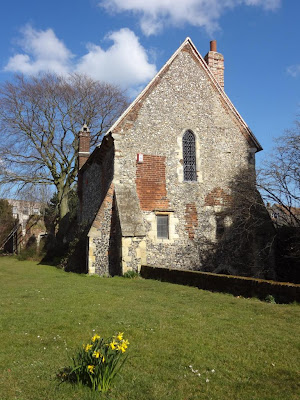 Over the next few centuries the Franciscans in England included such great scholars ('clerks of Oxford', in fact) as William of Ockham, Roger Bacon, and Duns Scotus. In Oxford the Franciscans were based in the area around St Ebbe's, but beyond the odd street-name there's little evidence of their presence there today. The Greyfriars guidebook observed that few Franciscan buildings in England have survived, because they tended to be simple and in the centre of towns - and thus prime building land, once no longer in use. The Canterbury house was surrendered on 13 December 1538, and over time all but the guesthouse disappeared, used at various times as prison and tea-room. 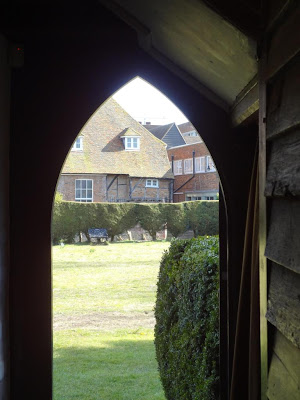 It's only within the past decade that the guesthouse has been restored to use, and it now contains a small exhibition room and a chapel (Greyfriars originally had a large church of its own, but that was destroyed). The chapel, on the upper floor, is tiny and charming. 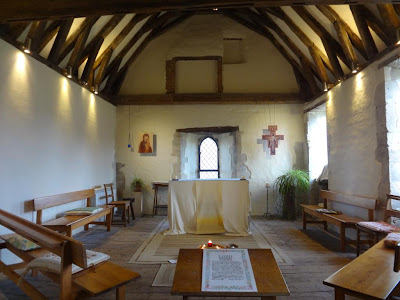 The number of lit candles burning away before the altar indicated that a healthy number of pilgrims had found their way here before me. 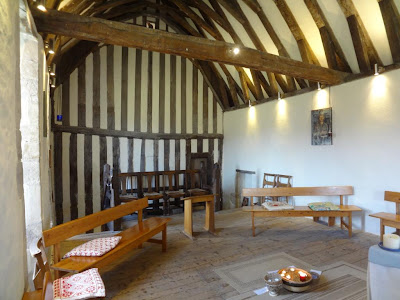 Through the windows I watched children playing with their father in the garden below, no doubt enjoying their Easter holiday. 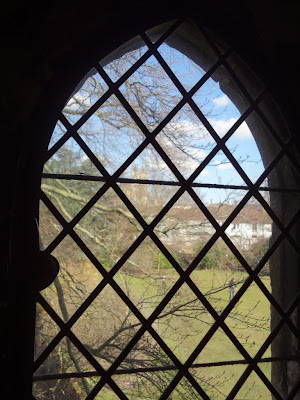 The towers of Canterbury Cathedral are not far away: 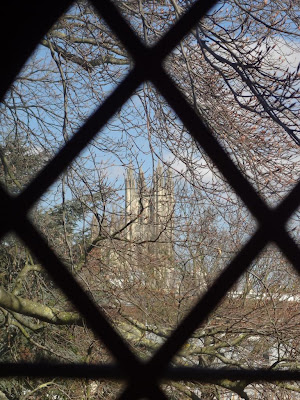 Greyfriars now belongs to Eastbridge Hospital under the care of the Society of St Francis - the love with which it is looked after is obvious in every aspect, including the excellent guidebook (from which I got most of the information in this post). It's open to visitors from Easter until the end of September, Monday-Saturday, 2-4pm, and I recommend a visit. 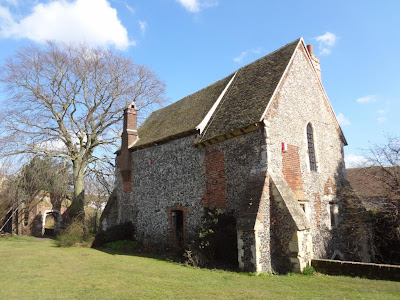 For a student of medieval literature, one of the best-known Franciscans of Canterbury is James Ryman, carol collector extraordinaire. Ryman is credited as the author or compiler of a manuscript of English carols and songs (now Cambridge University Library MS. Ee 1.12) which contains more than 170 individual texts, of which a list can be found here. The manuscript was written in 1492, and preserves something like a quarter of all surviving fifteenth-century English carols. I post his carols here quite regularly, under this tag, but it would take a long time to get through them all! The carols in the manuscript were all printed in 1892, in a volume accessible in full online here. Whether he wrote or collected them, Ryman produced a valuable set of poems for posterity to enjoy, and I couldn't help hearing his carols in my head as I wandered round Greyfriars. In the spirit of their founder, the English Franciscans included a good few poets and carollers - apart from Ryman, there's Oxford's William Herebert (often quoted on this blog) and John of Grimestone, whose carol collection includes some exquisite lullaby lyrics (here, here and here).

And so let's close with one of Ryman's carols, a really lovely macaronic version of the Marian antiphon for the Easter season, 'Regina caeli'. Because this is late and straightforward Middle English, I've given it in modern spelling, but the original text is here.

O virgin pure, as he behight, [promised]
Quem meruisti portare,
He rose, full sure, by his great might:
Regina celi, letare.

O empress, that emperor,
Quem meruisti portare,
In our distress he is succour:
Regina celi, letare.

For us pray thou to Emmanuel,
Quem meruisti portare,
So that we may in heaven dwell:
Regina celi, letare.
Posted by Clerk of Oxford at 9:14 am

Thanks for this. I'll be heading there on this excellent recommendation!

As a professor of British literature who teaches at the University of Saint Francis, I really appreciated this blog entry. The commentary is informative and the pictures lovely. Thanks!

Thank you both for commenting!

This really is an architectural gem! I love the almost reluctant Gothic of the arches and its sequestered place in the geography. I'm very tempted to go to Canterbury myself and have a closer look.