A Medieval Love Poem: 'Yet would I not the causer fared amiss' 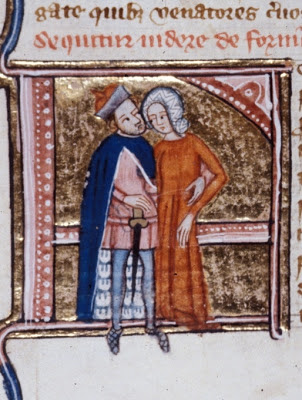 Yet would I not the causer fared amiss,
For all the good that ever I had or shall;
Therefore I take mine aventure, iwiss,
As she that hath forsaken joys all,
And to all pain is both subject and thrall.
Lo, thus I stand without words mo, [more]
All void of joy and full of pain and woe.

Now ye that are in mirth and plesaunce [joy]
Have mind on me who was sometime in ease
And had the world at mine own ordynaunce, [at my control]
Which now is turned into all dis-ease.
Now glad were she who Fortune so could please,
That she might stand in very sycurnesse, [true security]
Never to feel the stroke of unkindness!

Departing is the ground of displesaunce,
Most in my heart of any thing earthly.
I you ensure wholly in remembrance
Within myself, I think it verily,
Which shall continue with me daily,
Since that ye must needs depart me fro; [from]
It is to me a very deadly woe.


[A paraphrase: Yet I would not wish that the causer of my sorrow fared amiss, for all the good that ever I had or shall have; therefore I take my fortune, truly, like one who has forsaken all joys, and who to all pain is both subject and thrall. Lo, thus I stand without any further words, all void of joy and full of pain and woe.
Now you who live in mirth and joy, think on me who was sometime in ease, and had the world at my disposal, which now is turned into all trouble. Now glad would she be who could so please Fortune that she might stand in true security, never to feel the blow of unkindness!
Parting is the greatest cause of sorrow in my heart of any earthly thing. I keep you wholly in remembrance within myself, I think truly, and it shall stay with me daily, since you must depart from  me; it is to me a very deadly woe.]


This is a poem from the Findern manuscript (Cambridge University Library Ff.1.6), a fifteenth-century anthology which belonged to a family in southern Derbyshire (named, and living in, Findern), and which contains a variety of verses by many different authors. There's some chunks of Chaucer and texts attributed to Hoccleve and Lydgate, but the more interesting poems are the anonymous ones, several of which (like this one) seem to be spoken by female voices. There are women's names written in the manuscript, and women certainly read and probably composed a number of these poems. Thus, this group of poems has got quite a bit of attention in recent years, and I've posted two of them here and here.

Their style appeals to me: the syntax is intricate but the vocabulary is simple, and there are few poetic flourishes - or rather, they are subordinated to the sense of the text. The stylistic ornament, such as it is, lies in the repeating and negating of certain key words - ease and disease, plesaunce and displesaunce - and the play of pronouns, from me to ye (plural) and the imagined other she, until in the last verse you, 'the causer', the object of love, is finally addressed. Long sentences wind around short phrases which stab with a startling directness: 'all void of joy and full of pain'; 'departing is the ground of displesaunce'; 'it is to me a very deadly woe.' The opening in particular is strikingly abrupt, so much so that we might wonder if a previous verse has been lost - but most of the poems surrounding this one deal with similar themes and situations of parted lovers, and they almost flow into one another (only the verse form and the genders of the speakers change). Such abrupt beginnings are not unknown in fifteenth-century verse; English poets had just discovered how effective they can be! This one works because it leads into a poem whose power lies in its confronting frankness, especially in that bold first stanza, and in the proud declaration 'Therefore I take mine aventure' ('I accept my fortune', or 'I take my chance'). Brave woman!


When I first encountered a handful of the Findern poems in a modern anthology, I remember being irked because the editor insisted on repeatedly describing them as 'felt' - 'and what kind of critical vocabulary is that?' I asked myself crossly, with all the arrogance of a first-year graduate student. But now I sympathise with that editor. It's difficult to talk about these poems without pronouncing on the veracity of their 'feeling', and the experiences they purport to describe - they seem to have more truth about them than most medieval lyrics, which are such a highly conventional form. But these poems are conventional too, and of course their degree of 'truth' doesn't have anything to do with their literary quality. The best one might say is that they strongly convey an idea of heartfelt and sincere love; if it's a poetic illusion, it's a good one. In a previous post, I compared them to the sonnets of Elizabeth Barrett Browning, but I think Christina Rossetti would understand them too (read them alongside Monna Innominata...).

On another note, it's a source of satisfaction to me that if you google 'medieval love poem', among the top results is a post from this blog about the Findern poem 'Where I have chosen, steadfast will I be'. This fact pleases me for two reasons: firstly because it seems right that an actual medieval text should be presented to people looking for medieval love poems, alongside the rather odd pastiches which Google's vagaries throw up; and secondly, because the Findern poems are so untypical as medieval love poems go. In their air of simplicity and honesty, their absence of physical description, and their focus on memory, interiority and what Jane Austen would call 'retentive feelings', they have little in common with the mainstream literature of their age. Personally, I have limited patience with the majority of medieval love-literature, which set the pattern for much that is most unpleasant about educated men's behaviour towards women, even today; elaborate courtly games of flirtation are not to my taste, and Anglo-Saxon literature is all the better for having so little to say about romantic love - they had so many other things to be interested in! So if the casual Googler seeks a medieval love poem, why should he or she not encounter the plain-speaking fidelity of a Derbyshire gentlewoman, as well as the high-flown nonsense of courtly love, where men profess their adoration for women they have only glimpsed, and protest they'll die if these women don't obey their passing whims? I consider this high Google rating my own little triumph for gender parity in medieval studies ;) So go and read 'Where I have chosen, steadfast will I be', and do your bit...

And then reflect on whether the women who liked these poems would have agreed with Anne Elliot (from Persuasion, ch.23):

'We certainly do not forget you as soon as you forget us. It is, perhaps, our fate rather than our merit. We cannot help ourselves. We live at home, quiet, confined, and our feelings prey upon us. You are forced on exertion. You have always a profession, pursuits, business of some sort or other, to take you back into the world immediately, and continual occupation and change soon weaken impressions... Your feelings may be the strongest... but ours are the most tender. Man is more robust than woman, but he is not longer lived; which exactly explains my view of the nature of their attachments. Nay, it would be too hard upon you, if it were otherwise. You have difficulties, and privations, and dangers enough to struggle with. You are always labouring and toiling, exposed to every risk and hardship. Your home, country, friends, all quitted. Neither time, nor health, nor life, to be called your own. It would be hard, indeed' (with a faltering voice), 'if woman's feelings were to be added to all this.'

Or with this, one of the few points on which Anne and Chaucer's Wife of Bath (688-696) find common ground:

'Well, Miss Elliot,' (lowering his voice,) 'as I was saying we shall never agree, I suppose, upon this point. No man and woman, would, probably. But let me observe that all histories are against you - all stories, prose and verse. If I had such a memory as Benwick, I could bring you fifty quotations in a moment on my side the argument, and I do not think I ever opened a book in my life which had not something to say upon woman's inconstancy. Songs and proverbs, all talk of woman's fickleness. But perhaps you will say, these were all written by men.'

'Perhaps I shall. Yes, yes, if you please, no reference to examples in books. Men have had every advantage of us in telling their own story. Education has been theirs in so much higher a degree; the pen has been in their hands. I will not allow books to prove anything.' 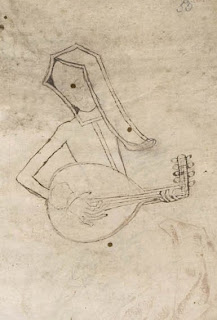 Sketch of a woman playing a lute, on the last leaf of BL Sloane 554

yit wulde I nat the causer faryd a-mysse,
ffor all the good that euer y had or schall;
Ther-for y take myn auenture, I-wisse,
As sche that hath for-saken Ioyus all,
And to all payne is bothe soiet and thralle.
Lo, thus I stonde with-owten wordes moo,
All voyde of Ioy an full of payne and woo.

Now ye that bathe in myrthe and plesaunce
Haue mynde on me that was sum-tyme in ease
And had the world at myn ovne ordynaunce,
Whiche now is turned in-to al disease;
Now glad wher sche that fortune so cowde please,
That sche myght stonde in verry sycurnesse,
Neuer to fele the stroke of vnkyndnesse.

Departyng ys the grownde of dysplesaunce,
Most in my hert of eny thing erthly,
I you ensure holy in remembraunce
With-in my-self y thenke hit verryly,
Wiche schall contynu with me dayly;
Syns that 3e moste nedys departe me fro,
It ys to me a verry dedly woo.
Posted by Clerk of Oxford at 9:46 pm

Thank you so much for publishing this! I remembered the first verse but couldn't find the rest on Google and began to think I had made up the verse myself - not that I have the talent!
I was at Oxford a hundred years ago and read many of these beautiful poems when I was 'crossed in lurve' :-(
Your blog is beautiful and much appreciated!