'And all was Deo gracias' 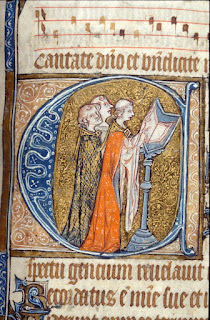 A late fourteenth-century poem on the theme 'Deo Gracias' (in modernised form):

In a church where I did kneel
The other day, in the morning,
The service pleased me very well,
And so the longer would I lyng. [stay]
I saw a clerk a book forth bring,
Which pointed was in many a place;
Fast he sought what he should sing,
And all was 'Deo Gracias'.

All the choristers in the choir
At that word fast did cry:
The noise was good, and I drew near
And called a priest full privily,
And said: 'Sir, by your courtesy,
Tell me, if you have a space,
What it means, and for why
You sing this Deo Gracias.'

In silk that comely clerk was clad,
And o'er a lectern leaned he;
And with his words he made me glad,
And said: 'Son, I shall tell thee.
Father and Son in Trinity,
The Holy Ghost, ground of our grace,
Also, many times thank we
As we say Deo Gracias.

'To thank and bless him we are bound
With all the mirth that man may minne: [make]
For all the world in woe was wound
Until he crept into our kin, -
A lovely girl he lit within,
The worthiest that ever was,
And shed his blood for our sin:
And therefore, Deo Gracias.'

Then said the priest, 'Son, by thy leave
I must go on with my service,
I pray thee, do not be aggrieved,
For thou hast heard all my device,
The cause why it is the clerks' wise, [custom]
And Holy Church memory of it has,
Unto the prince so great of price,
For to sing Deo Gracias.'

Out of that church I went my way,
And on that word was all my thought,
And twenty times I did say,
'God grant that I forget it not!
Though I were from good fortune brought,
What help were me to say 'alas'?
In the name of God, whate'er be wrought,
I shall say 'Deo gracias.'

In mischief and in bonchief both, [trouble and good fortune]
That word is good to say and sing,
And not to wail nor to be wroth,
Though all be not to your liking.
For sorrow shall not ever lyng,
And some time pleasure will o'er-pass,
But ay in hope of amending,
I shall say 'Deo Gracias.'

Amend what thou hast done amiss,
And do well then, and have no dread,
Whether thou be in bale or bliss;
Thy good endurance shall bring thee reward.
If thou thy life in pleasure lead,
Look thou be kind in every case,
Thank thy God, if thou well speed,
With this word, Deo Gracias.

If God hath given thee talents mo [more]
Than he hath others, two or three,
Then I advise thou rule thee so
That men may say good things of thee.
Beware of pride, and boasting flee;
Thy virtues let no sin deface,
But keep thee clean, courteous and free,
And think on Deo Gracias.

If thou be made an officer,
And art a man of great might,
What cause thou judge, look that it be clear, [just]
And take from no man his proper right.
If thou be strong and fierce in fight,
With ill will no man ever chase,
But fear thy God both day and night,
And think on Deo Gracias.

If we this word in heart will have,
And ay in love and loyalty lende, [live]
From Christ by covenant we may crave
That joy that shall never have end,
Out of this world when we shall wend,
Into his palace for to pass,
And sit among his saints hende,
And there sing Deo Gracias.


This poem survives in the Vernon Manuscript (as well as two other poetry compilations).  The Vernon MS contains a wide range of texts, but its set of what might be called 'poems on moral themes' form a group with distinctive shared features: most notably, the repetition of a single phrase in the last line of every verse, around which the theme of the poem builds itself. These poems tend to be long, wordy and somewhat rambling, as you might think this one is; there's not much sense of a logical progression of ideas, or a plan for where the poem is going! This can make some poems of this kind inaccessible or even tiresome, but at its best the loose structure creates a kind of meditative effect, where interconnecting thoughts circle around the one fixed point of the repeated phrase (my favourite example is 'This world fareth as a fantasy', one of the best of all the Middle English lyrics).

'Deo Gracias', with its chatty opening, is a particularly interesting specimen. Its narrator shares the endearing habit of his contemporaries, Chaucer and (especially) Langland, of witnessing something interesting and then going up to the nearest person and basically asking, 'hey, what's going on?' The person explains it to him until they run out of time, or get frustrated with the narrator's denseness, and they go off again, leaving the narrator to ponder what they've learned and then explain it to us, the readers.  I don't know that this narrative setting with the choir and the clerks particularly contributes to the moral theme of the poem, but it's a nice touch!  I suppose the idea is to model the practice of absorbing a phrase from the liturgy into private devotion; 'In summer before the Ascension' does a similar thing.  The Catholic Encyclopedia has some useful references for the liturgical and non-liturgical uses of the phrase 'Deo gracias', which gives context to this poem's focus on the words as a multi-purpose reminder of gratitude to God in all situations.

The Langland-esque beginning is one thing I like about this poem; another is that it's so positive and upbeat. It says that if you cultivate what self-help books like to call an 'attitude of gratitude', everything will basically be fine: if you're happy and successful, be grateful; if you have power, use it wisely; 'amend what you have done amiss', and don't worry about it.  If only all moral poems could make the life of virtue sound so pleasant and easy!  There are some lovely touches in the language, too - in the middle of a poem about something completely different, it's easy to overlook just how beautiful those four lines about the Incarnation are: 'all the world in woe was wound/Until he crept into our kin, - / A lovely girl he lit within,/The worthiest that ever was'.  Those verbs ('crept' and 'alighted') are quite commonly used in Middle English writing to describe the conception of Christ; carol-writers, particularly, opt for 'alight' (it rhymes with a lot of other words...).  Besides the rhyme potential of both verbs, they suggest an attempt to find language for the Incarnation which indicates a kind of unearthly movement, sudden, gentle, almost imperceptible.

Those four lines also reminded me that the most famous use of the phrase 'Deo gracias' in a medieval lyric is the last line of 'Adam lay ibounden', which similarly draws attention to the fact that it's using a line from the Latin liturgy in a vernacular song ('therefore we may sing, Deo gracias').  And in the preceding verse, 'the Holy Ghost, ground of our grace' might make you think of Julian of Norwich (or of T.S.Eliot): 'our Lord... shewed these words, and said: I am ground of thy beseeching: first it is my will that thou have it; and after, I make thee to will it; and after, I make thee to beseech it, and thou beseechest it.'

Finally, on a less elevated note, I found the line 'In mischief and in bonchief both' amusing, because who knew that the opposite of 'mischief' was 'bonchief'?  It makes complete sense, and is still ridiculous.

Here's the poem in the form I found it, in Religious Lyrics of the XIVth Century, ed. Carleton Brown (Oxford, 1952):

In a chirche þer i con knel
þis ender day in on morwenynge,
Me lyked þe servise wonder wel,
For-þi þe lengore con i lynge.
I sei3 a clerk a book forþ bringe,
þat prikked was in mony a plas;
Faste he sou3te what he scholde synge,
And al was Deo gracias.

In selk þat comeli clerk was clad,
And ouer a lettorne leoned he;
And wiþ his word he maade me glad,
And seide: 'sone, I schal telle þe,
Fader and Sone in Trinite,
þe holy gost, ground of vr graas,
Also oftesiþe þonke we
As we sei Deo Gracias.

'To þonke & blesse him we ben bounde
With al þe murþes þat mon mai minne:
For al þe world in wo was wounde
Til þat he crepte in-to vr kinne, -
A louesum buirde he li3te with-inne,
þe worþiest þat euer was,
And schedde his blod for vre sinne:
And þerfore Deo Gracias.'

In Mischef and in bonchef boþe,
þat word is good to seye and synge,
And not to wayle ne to bi wroþe,
þau3 al be nou3t at vre lykynge.
For langour schal not euer lynge,
And sum tyme plesaunse wol ouer-pas,
But ay in hope of a-mendynge,
I schal seye 'Deo Gracias.'

3if we þis word in herte wol haue,
And ay in loue and leute leende,
Of crist bi couenaunt we mow craue
þat ioye þat schal neuer haue ende,
Out of þis world whon we schul wende,
In-to his paleys for to paas,
And sitte a-mong his seintes hende,
And þer synge Deo Gracias.
Posted by Clerk of Oxford at 10:09 pm

Thank you so much for this poem. It really made my bad day better. I love your blog!

That's so nice to hear! And thank you for telling me, so that I can enjoy the thought of having made someone's day better :)

And I would like to say almost exactly the same!! Thank you so much for this poem; it made my not-so-good day better!! I love your blog. :) Deo gratias!

Gosh, can I add on here? This blog is a joy, thank you so much. I love everything about this post - both the poem and the commentary. Also, I love being able to vicariously visit British churches & Anglo-Saxon sites through you!

Thank you both - you have no idea how much such comments mean to me!