A nun's prayer to her guardian angel 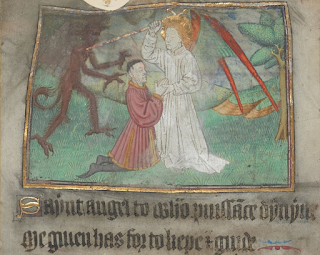 Since writing my post on medieval prayers to a guardian angel this time last year, I've been keeping an eye out for prayers on this subject; the previous post has proved popular, so I hope there's interest out there for some more. I recently encountered three more verse prayers (all in Religious Lyrics of the XVth Century, ed. Carleton Brown (Oxford, 1939)), of which this was my favourite:

'A prayer to the good angel'

As thow gothe betwix hym and me,
And knowethe my lyffe in euery degre,
Saying it in his presence,
Aske me grace to loue hym truly,
To serue my lorde with hertt duly,
With my dayly diligence.

O swete angell, that keepeth me,
Bryng me to blysse, I pray the!

This comes from a fascinating manuscript (now Henry E. Huntington Library, Ellesmere MS. 34 B.7) of Latin antiphons and hymns, intended for a community of nuns, which also contains a small collection of English prayers. Unusually, many of the rubrics for the antiphons are in English, too.  You may know one of the pieces, the beautiful Latin lullaby 'Qui creavit coelum', which is often known today as the 'Song of the Nuns of Chester'. The manuscript bears the inscription 'This book [be]longeth to Dame Margery Byrkenhed of Chestre' (see the bottom image here); Margery was probably a nun at St Mary's in Chester, and the English prayers were perhaps collected for her own private use. So this prayer to a guardian angel, one of the most personal types of prayer in any case, is given extra interest because we may know the name of the woman who used it.

The prayers have titles such as 'a good prayer' or 'a devout prayer'; this one is headed 'to the good angel', which is, as I discussed in my previous post, a common Middle English phrase for what we call a 'guardian angel'. Here's a modernised version of the poem:

O sweet angel, to me so dear,
Who night and day standeth me near
Full lovingly, with mild mood, [gentle mind]
Thanks, honour, love and praising,
Offer for me to Jesu, our king,
For his gifts great and good.

As thou goest betwixt him and me,
And knowest my life in every degree,
Telling it in his presence,
Ask me grace to love him truly,
To serve my Lord with heart duly,
With my daily diligence.

Keep me from vice and all perils,
While thou with me daily travels
In this world of wickedness;
Cause my petitions to be granted
By thy prayer daily haunted,
If it please thy holiness.

O sweet angel, who keepest me,
Bring me to bliss, I pray thee!

I was intrigued by the line 'by thy prayer daily haunted', having always unthinkingly assumed that haunt in the sense of' 'frequent' (v) was a metaphorical use of the word, adopted from the ghostly kind of haunting; but of course it's completely the other way around. In Middle English, haunt meant 'to practise habitually, or to frequent' (as the MED entry for haunten shows), and the word had nothing to do with spirits in any way before the sixteenth century - the OED's first citation for the verb in connection with 'unseen or immaterial visitants... imaginary or spiritual beings, ghosts, etc.' is from 1597. So there's nothing odd about the use of this word in reference to the angel's prayers.

The appealing image of the angel 'going betwixt' heaven and earth, busily telling God what the person in its charge has been doing, reminded me of this meditation:

For the fulfilling of the behests of the eternal Father, thousands of thousands glide in swift flight twixt heaven and earth, like industrious bees that flit to and fro between their hive and the flowers; a busy throng, innocent and stainless, neither laggard nor disobedient...

The poem certainly envisages an angel flitting around all over the place - not only moving between God and its charge, but 'standing near' her night and day, travelling with her everywhere 'in this world of wickedness', and haunting heaven with its prayers; an industrious bee indeed!

Below the verse in the manuscript is this prayer:

O my Lord Jesu Christ, as it hath pleased thee to assign an angel to wait on me daily and nightly with great attendance and diligence, so I beseech thee through his going betwix us that thou cleanse me from vices, clothe me with virtues, grant me love and grace to come see [sic] and have without end thy bliss before thy fair face, who liveth and reigneth after thy glorious Passion with the Father of heaven and with the Holy Ghost, one God and persons three without end in bliss. Amen.


Clearly this prayer and the poem are two separate texts; maybe Margery also liked to keep an eye out for prayers to guardian angels, and collected them when she found them.

Here's a wonderful illustration of a fifteenth-century English lady praying to her guardian angel, from British Library, Royal 2 A XVIII, f.26: 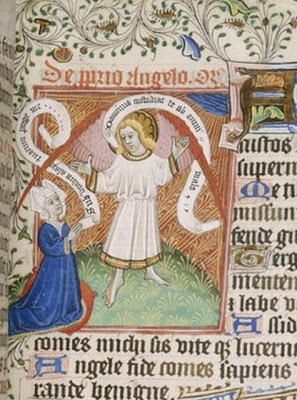 This lady is rather grander than Margery Byrkenhed of Chester would have been - the manuscript was made for Margaret Beauchamp, Duchess of Somerset, mother of Margaret Beaufort, and grandmother of Henry VII. The kneeling woman has a scroll saying 'sub umbra alarum tuarum protege me', 'hide me under the shadow of thy wings', and the angel is saying, 'Dominus custodiat te ab omni malo', 'the Lord preserve thee from all evil'; both are quotations from psalms used at Compline. Note that the woman is, in fact, covered by the angel's wing.

The text on the page is a Latin prayer to the guardian angel - the first three verses of this prayer, which is probably the ultimate source of a guardian angel prayer still widely used today ('Angel of God, my guardian dear...'). The man who composed that prayer, three hundred years before this manuscript was made, was a monk at St Augustine's, Canterbury, and a near neighbour and contemporary of Eadmer, whose interest in guardian angels I described in this post. I wonder if the two of them ever discussed this particular devotion.
Posted by Clerk of Oxford at 8:03 am

I just wanted to say again thank you for an amazing post. What a beautiful subject. Just in case no else has said it recently - I really, really appreciate this blog!

Also, I had no idea guardian angels were a topic of devotion in the medieval period. I would have reckoned the idea a more contemporary one.