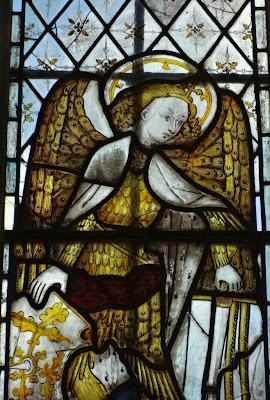 Today is Michaelmas, the golden autumn feast of St Michael and All Angels. It falls at perhaps the most beautiful time of the year, on the cusp between the last glow of fiery summer and the yellow-gold 'fallowing' leaves of autumn; the wings of Michael and his angels seem to flutter in harmony with the unleaving of the trees. 'Michaelmas' has been the English name for the feast since at least the eleventh century, and it's a lovely one in every context: Michaelmas daisies, Michaelmas fairs, Michaelmas moons, and more. (Terms, too.) The Anglo-Saxon poem the Menologium alliteratively calls it the 'high-angel's tide in harvest', i.e. 'the archangel's day in autumn':

Lo, we honour widely throughout the earth
the high-angel's tide in harvest,
Michael, as the multitude know,
five nights after the equinox day.

St Michael is particularly associated with heights, and churches on hills and in high places were very often dedicated to him. Dragon-slayer, guardian of humanity, and bearer of the scales of divine justice, St Michael was an immensely popular figure in the Middle Ages, and in this post are four pieces about St Michael by medieval English writers: a Latin sequence by the eighth-century Northumbrian scholar Alcuin; an English homily from c.990 by Ælfric; a prayer in verse by John Lydgate (c.1370–c.1451); and a homily by John Mirk (fl. c.1382–c.1414). Illustrations are from a few favourite medieval manuscripts and some of the many, many depictions of St Michael to be found in medieval churches. 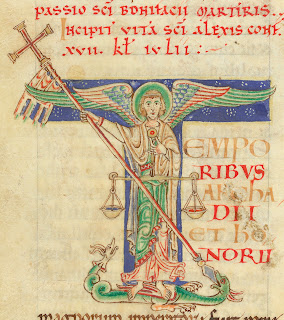 Michael, Archangel
Of the King of Kings,
Give ear to our voices.

We acknowledge thee to be the Prince of the citizens of heaven:
And at thy prayer God sends
His angels unto men,

That the enemy with cunning craft shall not prevail
To do the hurt he craves
To weary men.
Yea, thou hast the dominion of perpetual Paradise,
And ever do the holy angels honour thee.

Thou wert seen in the Temple of God,
A censer of gold in thy hands,
And the smoke of it fragrant with spices
Rose up till it came before God. 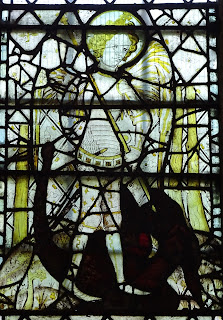 Thou with strong hand didst smite the cruel dragon,
And many souls didst rescue from his jaws.
Then was there a great silence in heaven,
And a thousand thousand saying "Glory to the Lord King."

Hear us, Michael,
Greatest angel,
Come down a little
From thy high seat,
To bring us the strength of God,
And the lightening of His mercy.

And do thou, Gabriel,
Lay low our foes,
And thou, Raphael,
Heal our sick,
Purge our disease, ease thou our pain,
And give us to share
In the joys of the blessed. 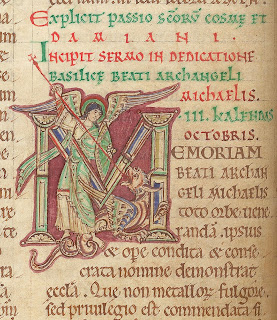 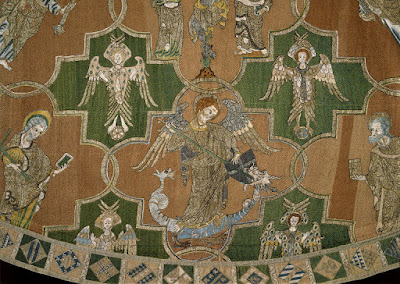 St Michael in medieval Opus Anglicanum, on the Syon Cope

"I say unto you that their angels ever behold the face of my Father who is in heaven." By these words it is shown that an angel is appointed for every believer as a guardian, who shields him against the devil’s plotting and supports him in holy virtues. As the Psalmist says of every righteous person: "God commanded his angels about you, that they should hold you and bear you in their hands, lest you strike your foot against a stone." It is a great honour for Christians that each person, from birth, has an angel assigned to him as a guardian. Just so it is written of the Apostle Peter that the angel led him out of prison and he came to his companions and asked for entrance, knocking, and the faithful ones said, "It is not Peter who is knocking, it is his angel."

Truly, the angels whom God has appointed as guardians for his chosen never leave his presence, because God is everywhere, and wherever the angels fly they are ever in his presence, and enjoy his glory. They take news of our words and deeds to the Almighty, although to him nothing is hidden; as the Archangel Raphael said to the man of God, Tobias, "When you prayed, I offered your prayers before God."

The Old Testament tells us that archangels are set over every nation, above the other angels, so that they may protect the peoples, as Moses, in the fifth book of the Old Testament, reveals in these words: "When the high God separated and scattered the offspring of Adam, he set the boundaries of the peoples according to the numbers of his angels". The prophet Daniel agrees with this in his prophecy: a certain angel of God spoke to Daniel concerning the archangel who guided the Persians, and said, "The archangel came to me, the leader of the Greek people, and none was my helper but Michael, leader of the Hebrews. Even now Michael, one of the foremost of the leaders, came to support me, and I remained there with the king of the Persians." With these words, when he said that Michael came to help him, it is shown what great care the archangels take in their authority over mankind.

Now it is to be believed that the archangel Michael has care of Christian people, who was the leader of the Hebrew people while they believed in God; and that he manifested himself when he built himself a church among a faithful people on the mount Gargano, as we read before. It is arranged by God’s dispensation that the glorious angel of heaven is continually the helper of Christians on earth and their advocate in heaven before Almighty God, who lives and reigns for ever in eternity. Amen.


- Ælfric, Homily for Michaelmas, from the first series of his Catholic Homilies. The whole sermon, of which this is only the conclusion, can be found online here): 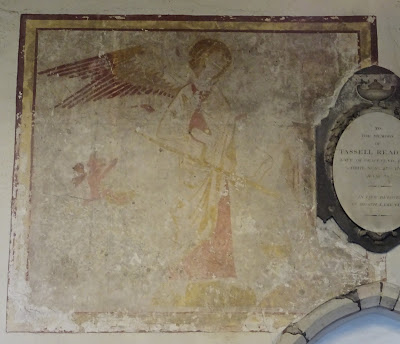 As in the painting above, St Michael is frequently depicted weighing souls, balancing their good and bad deeds in his scales to judge which side will prevail. In this image from a 14th-century manuscript, Michael weighs the soul of a dying man, as devils try to seize it and the Virgin intercedes on its behalf (Yates Thompson 13, f. 151): 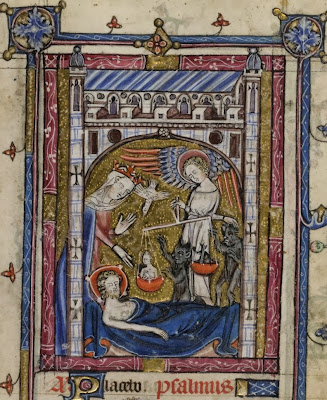 Sometimes, as in this stunning painting from South Leigh (Oxfordshire), the Virgin lays her rosary beads on the good side of the scale: 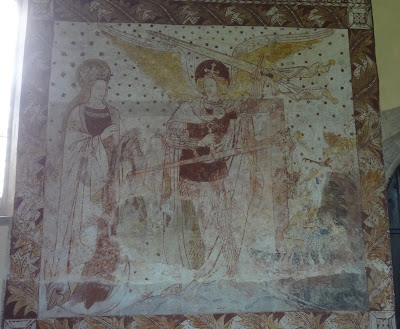 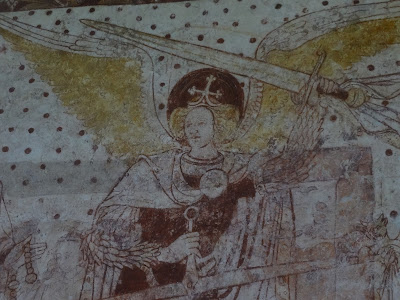 The devils in the details are wonderful too: 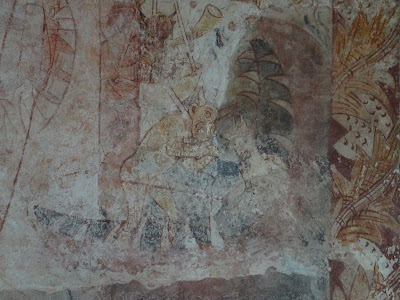 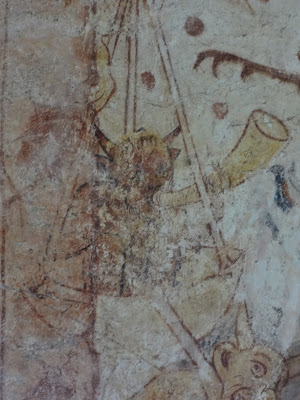 And here's the extraordinary 'Doom' painting at Wenhaston in Suffolk, with Michael weighing the soul itself against its little evil deeds: 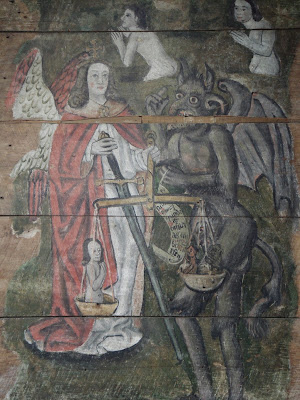 These paintings are all on a grand scale, taking up half a wall or more - a cosmic battle played out on the walls of quiet village churches. 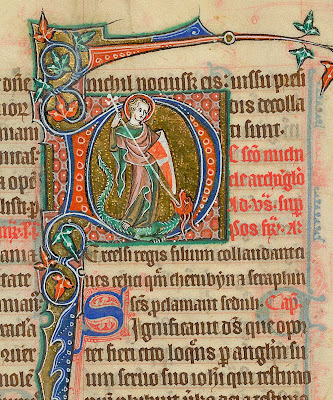 O Michael, by grace of Christ Jesu
Called among angels the heavenly champion,
[Who] by a special property of virtue
Held a battle, vanquished the dragon,
Be thou our shield and our protection
In every trouble of dangers infernal,
Defend our cause, present our prayer
Unto the Lord who governeth all. 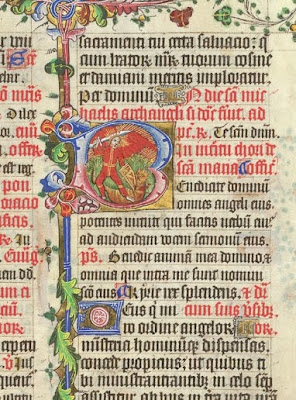 Then schull ye all knel adowne, and pray to Seynt Michaell þat he apere to you, when ye schull passe out of þys world, and defende you from your enmyse, and bring you to þe ioye of paradise. Amen. 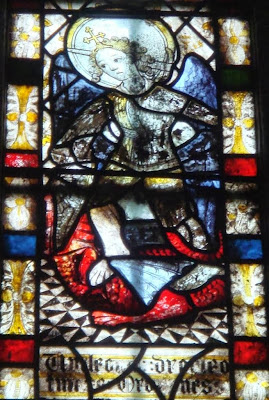 Good men and women, on such a day you should keep St Michael's Day, God's holy archangel; on this day you should come to church and worship God and this holy archangel. You should know that holy church on that day makes mention of all God's holy angels, for the great help and service that mankind has from them; but especially it keeps the memory of St Michael, because of the particular powers that he has above all others, for he is wonderful in appearing, he is marvellous in miracle-working, and victorious in his fighting...

He guards paradise, and receives the souls which are sent thither. He shall slay the Antichrist on the mount of Olivet.  He shall bid all the dead to rise on the day of doom, and he shall bring to the doom the Cross of Christ, the nails, the spear, the crown of thorns, and all other instruments of his Passion...

So you should all kneel down, and pray to Saint Michael that he may appear to you when you pass out of this world, and defend you from your enemies, and bring you to the joy of paradise. Amen. 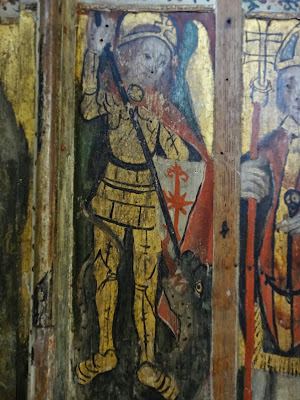 St Michael on the painted screen at Westhall, Suffolk
Posted by Clerk of Oxford at 10:00 am