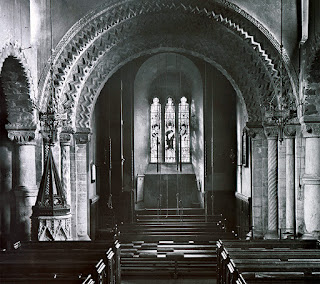 Three book-related links, if you'll excuse the plug! My latest piece for History Today is now available to read online at this link. It's about the strange and intriguing story of the mysterious 'St Ragner of Northampton' - one of those medieval saint's legends which tells you relatively little about the saint it's commemorating, but is very revealing about the community which honoured the saint. In this case it seems to tell us something about the Scandinavian connections of at least one man living in medieval Northampton, and the developing legend of the fearsome Ragnar Lothbrok, now one of the most famous Vikings of medieval literature.

If you just can't get enough Ragnar Lothbrok (who can?), I also have a story in this month's BBC History Magazine about the Ragnar legend, explaining how the stories about him grew up and how, after their 'rediscovery' in the 17th century, they helped to shape the modern image of the Vikings: 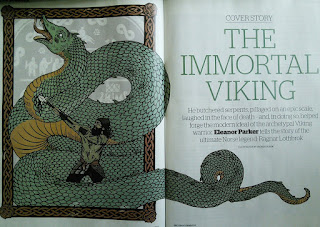 These are topics I discuss at greater length in my book, along with a range of other stories about the Vikings in England - I talked about some of those recently in an interview with History Answers, which you can read here. (That's the last plug!) The story of St Ragner of Northampton is an example of something I particularly wanted to do in the book: to give prominence to these kinds of local traditions, which differ in some interesting ways from the mainstream, popular narrative about the Vikings people are most familiar with today. (Often one derived from those Old Norse sagas and poems 'rediscovered' in the 17th century, which were unknown in medieval England, in that form at least.) It made me newly aware of what a rich history so many of these English towns have - in the book I talk about stories from Northampton, Grimsby, Crowland, Bury St Edmunds, and more, all individual and fascinating in their own ways. They're a precious heritage of legendary history, celebrating the long and venerable stories of these communities across many centuries. What an incredible thing - and the Vikings are only one part of it...
Posted by Clerk of Oxford at 4:25 pm No comments:

Email ThisBlogThis!Share to TwitterShare to FacebookShare to Pinterest
Labels: Vikings 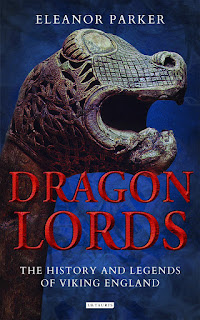 My book, Dragon Lords: The History and Legends of Viking England, is officially published this week - today, in fact, which is (entirely by accident) a significant date. By some strange chance, June 8 more than once saw an important moment in the history of Viking-ruled England...

First, it was the date (probably) of the famous Viking attack on the island monastery of Lindisfarne in 793. This incident was preceded - according to the Anglo-Saxon Chronicle - by the appearance of fiery dragons in the sky, a portent of disaster to come. The Lindisfarne attack has often been treated by later historians as the 'beginning of the Viking Age' (though history isn't really quite as neat as that), and it certainly had an emblematic status even in the Anglo-Saxon period, seeming to mark something new and dangerous. It seems very likely that the date was June 8; however, some manuscripts of the Chronicle say January 8, so whether Anglo-Saxon readers of history would have known the date is a debatable point. 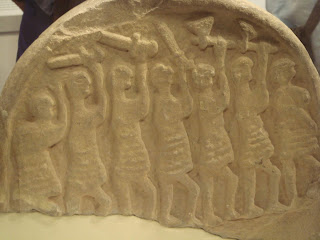 Warriors on the Lindisfarne Stone

230 years later, right at the other end of the Viking Age, England had a Danish king. Cnut had taken the English throne in 1016 after a long and bruising period of warfare, and during his reign he steered a skilful course: presenting himself on the one hand as a model Christian king, pious and just to English and to Danes, and on the other hand as the triumphant heir to all Viking victories over Anglo-Saxon kings. On 8 June in 1023, Cnut participated in an elaborate ceremony to honour St Ælfheah, Archbishop of Canterbury, who had been murdered by a Viking army (not led by Cnut) at Greenwich in 1012. During this ceremony Ælfheah's body was returned from London to Canterbury, travelling in state by ship down the Thames. This is how the Chronicle describes the ceremony:


[In this year, at St Paul’s minster in London, King Cnut gave full permission to Archbishop Æthelnoth, Bishop Brihtwine and all the servants of God who were with them to take up the archbishop St Ælfheah from his tomb, and they did so on 8 June. And the glorious king, the archbishop, the bishops, earls, and a great number of ecclesiastics and lay people carried his holy body by ship across the Thames to Southwark, and there entrusted the holy martyr to the archbishop and his companions. And then, in a distinguished company and with glad rejoicing, they conveyed him to Rochester. Then on the third day Queen Emma came with her royal child Harthacnut, and then they all with great glory and jubilation and songs of praise carried the holy archbishop into Canterbury.]

This was an important moment: a display of reparation for the most high-profile killing of the Danish Conquest, as well as an opportunity for Cnut to cement his relationship with the Anglo-Saxon church. But it was hardly a parade of humility and penance - Cnut was taking upon himself the responsibility of atoning for the acts of a Viking army led by one of his rivals (/closest supporters... they often go together!), and using this as a chance to display his authority. Was the date significant? I suspect the hand of Archbishop Æthelnoth, but we will never know for sure...

It was a great royal occasion, attended not only by the king and queen but by their son, Harthacnut, who was no more than five years old at this point. This is Harthacnut's first appearance in the historical record, and his presence here is probably a public acknowledgement of him as his father's heir (in preference to his older half-brothers, the sons of Cnut's first wife). On this state occasion, the little boy might have been intended to represent a living sign that the Danish dynasty, now firmly ruling England, would continue beyond Cnut's own lifetime. 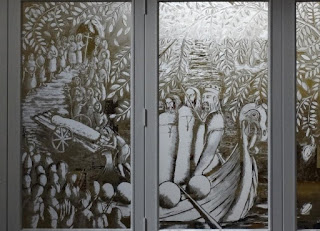 Such was Harthacnut's first appearance; and his last brings us to our third and final significant June 8th: this time in the year 1042, when Harthacnut - by now king - was attending a wedding party at Lambeth, celebrating a wedding between two of the leading Danish families resident in England.

[In this year Harthacnut died, as he stood drinking; he suddenly fell to the earth with a terrible attack, but those who were nearby caught him, and afterwards he never spoke a word but died on 8 June. And all the people then chose Edward, and received him as king, as was his natural right.]

And so died the last Danish king of England, as recorded contemptuously by one version of the Anglo-Saxon Chronicle. (Though we shouldn't overlook half-Danish Harold Godwineson, whose Scandinavian family links you can read about in my book...). Young Harthacnut 'never did anything kingly as long as he ruled', snipes another chronicler, listing his various iniquities; so at least some people in England were very pleased at his sudden demise. His death was certainly convenient to the supporters of his half-brother, Edward (the future Confessor), and it has sometimes been suggested that he was poisoned at this feast. To me the timing, on that ominous 8 June, does make such a theory alluring, though I don't really think it likely. If you were writing a historical novel, you might make quite a story of it: imagine an Anglo-Saxon sleeper agent, deciding to get rid of the unpopular Danish king by murdering him - poisoning him at a feast, and on the very anniversary of the day Viking ships had first descended with terror on the English coast...

OK, on balance I doubt it - but it's a reminder of how often in history coincidence produces more audacious artistic effects than any novelist would dare to attempt. A medieval historian might instead have seen the hand of Providence, 'the one who has power over times and seasons' (as Beowulf puts it: se geweald hafað sæla ond mæla). Medieval scholars were trained to think in anniversaries, through the yearly cycle of anniversaries which are the feasts of the church's year. Where the human mind thinks in days and years, Providence deals in centuries, and it was a very neat bit of work that the last Danish king of England should die on this day, 249 years after that attack on Lindisfarne - just one year short of a round quarter of a millennium. 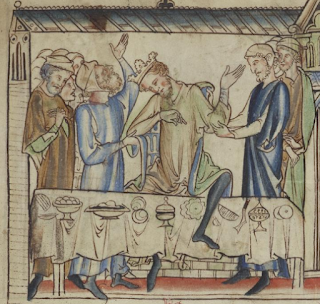